The young electronics company Xiaomi is exploding in China and seems posed to take over the world. In the four short years since its founding, Xiaomi has become the electronics brand to watch in the most populous nation on earth.

Xiaomi is the now the real deal — thanks in part to its unabashed appropriation of design cues from companies like Apple. But if Xiaomi wants to maintain its growth and expand outside of China, it must be prepared to accept the consequences for its tendency to blatantly rip competitors off.

The Chinese market operates under a different set of standards than the U.S. Here, originality is of utmost importance and intellectual property is highly regarded and protected. Though China has IP laws, they are generally considered weaker and are infrequently enforced.

Historically, however, the act of copying is sometimes worth the risk. Apple notably copied Xerox’s graphical user interface, and likewise, Microsoft copied Apple’s OS implementation for Windows. Both companies had great success — and both took flak for doing so. More recently Samsung stole several notable features from Apple, locking both companies up in endless court battles.

But Xiaomi is a different animal. Where Apple and Microsoft largely cribbed a concept, Xiaomi replicates designs and design elements. The products aren’t clones, per se, in that they aren’t identical down to the individual components or even functions, but the company undeniably looks to other products for design ideas. The company produces some original products, but the design of many of its offerings are more mashups than homages.

This shouldn’t be taken as the ignorant act of an immature company: Xiaomi knows exactly what it’s doing.

There have been many ‘inspirations’ for Xiaomi’s designs, but the company’s focus on Apple is staggering. Last week, CEO Lei Jun, wearing a black shirt and blue jeans, did his best to emulate Steve Jobs while unveiling the new Mi 4. He repetitively talked about Apple’s products. He even specifically stated that his company went to the same manufacturers that produce the iPhone to see what they could make for Xiaomi. And the presentation ended with a slide that stated “One more thing…”, an Apple hallmark. 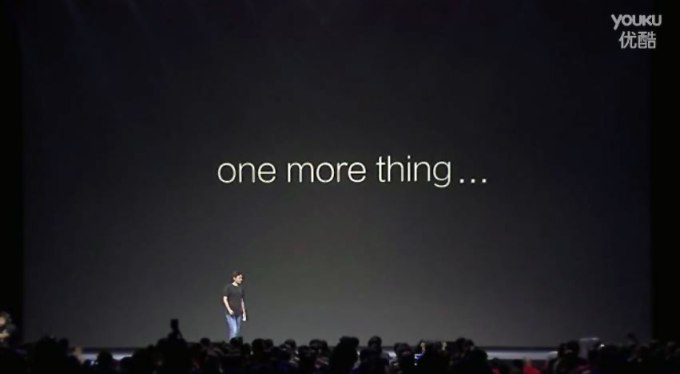 It was the only slide in the 95-minute show that was in English.

Apple’s influence on Xiaomi is widely known. Businessweek called the Mi 4 an “iPhone-esque smartphone.” Last year The New York Times called Xiaomi’s CEO Lei Jun a Steve Jobs “knockoff.” Brian Blair, analyst at Rosenblatt Securities, explained to CNBC last year that Xiaomi is not anxious to expand outside of China because the company is still in copycat mode.

“Samsung was in the copycat mode for a long time,” he added.

Xiaomi is widely known to take heavy inspiration from other companies’ products and marketing materials, but it most often copies Apple’s. The Mi 4 is Xiaomi’s best iPhone copy yet. It clearly takes inspiration from the iPhone 4s and iPhone 5. And for good reason: The iPhone is widely popular in China but carries a premium price tag.

Then there’s the company’s streaming box, the Mi Box, which bears a striking resemblance to the Apple TV as shown above. And in the case of the MiPad tablet, the company clearly looked at the iPad mini and iPhone 5c for their design choices — even in the MiPad’s marketing photos. The Xiaomi Mi Router Mini looks just like the Apple Magic Trackpad. The Mi Power Bank is a blatant iPod mini rip-off. Worse yet, the camera lens shown on the Mi 3 product page was the Apple Aperture icon — seriously: The lens shown on the phone was, without question, the icon of an Apple product until Xiaomi finally changed it on July 29.

Xiaomi’s focus on Apple is smart. The iPhone is expensive in Xiaomi’s primary market of China, where Xiaomi products are available for significantly less (the Mi 3 sells for about half of Apple’s budget iPhone 5c.) By constantly comparing and contrasting itself with Apple, Xiaomi is capitalizing on an established brand. So far it’s working: Xiaomi is seeing explosive growth in China, ending 2013 with a 271% year over year growth. Bloomberg reports that Xiaomi intends to sell 100 million handsets next year.

Xiaomi’s website was filled with what appear to be pilfered images. Many of the images shown on the Mi 3 camera roll on the website and on stage during Xiaomi’s announcement of the device were lifted and cropped. In some cases watermarks were removed. Here’s one stolen from National Geographic. And another from Flickr. Two are ripped from Getty Image users (1) (2). Xiaomi changed the images on July 29 after others noticed the infringement.

This tactic continued on the Mi 4’s product page where at least one image purportedly shot by the phone’s camera has been available online since at least 2006 and is also available for purchase through a stock image site.

Never mind that Xiaomi was passing off professional images as shots captured by the Mi 3’s camera. Again, here, Xiaomi apparently shows complete disregard for the intellectual property of others.

Xiaomi is even cribbing products from startups, and recently announced a virtual clone of the popular Kickstarter project Pressy. It’s essentially a little button that resides in a phone’s 3.5mm headphone slot. This little device raised $695K on Kickstarter in 2013 and is still available for pre-order for $27. The Xiaomi version costs $1-2 and does the same thing.

Even with the overwhelming evidence of copying, Xiaomi’s leadership is adamantly denying copying Apple’s design and has launched an all-out PR defensive. CEO Lei Jun apparently does not like the title “Steve Jobs of China.” Former Google VP and current Xiaomi Vice President Hugo Barra is aggressively trying to change the narrative surrounding the company, recently giving several interviews in which he stated that he is “sick and tired of people making sweeping sensationalist statements.”

Barra explained to The Verge and The Next Web that he sees Xiaomi as “an incredibly innovative company.”

It is hard to disagree. Xiaomi is innovating in Android customization for China, in sales methodology and especially in the quality of materials and specifications in its devices given their cost-to-price ratio.

But the fact remains that at even at high organizational levels, the company culture appears to be to ‘copy, not extend’. Whereas Samsung has now learned to lead the CE conversation, much as Sony did in the early 2000s, Xiaomi parrots.

Both Apple and Xiaomi found gaping holes in their home markets left from Samsung and Apple and then filled them with products designed to meet those needs.

Like Apple before it in the States, Xiaomi evolved the user interface for its core Chinese demographic. The smartphones ship with a heavily modified version of Android that allows sports a unique feature set and especially important for the Chinese market, allows for nearly endless customization. Forgoing Google services, Xiaomi launched its own application marketplace, which as of last year, had seen impressive download rates. MIUI is the best version of Android I’ve used and is available for many competitor’s handsets.

Many of Xiaomi’s innovations are centered around retail sales rather than the product designs themselves.

Xiaomi manages to sell its hardware below the market average by spending hardly anything on advertising and largely avoiding selling its products in stores, opting for direct consumer sales instead. According to Bin Lin, Xiaomi President, the company sells its products for nearly the cost of the bill of materials and does not factor in other line items like R&D and shipping. Unlike other top cell phone manufacturers, Xiaomi does not build up a large inventory of products prior to their launch.

So far, Xiaomi sells small batches of its products, sometimes around 5,000 units, allowing the company to hedge its costs while creating a consumer demand with a line-around-the-block mentality.

It must be stated here that all of those decisions are fairly innovative for the Chinese market — and the world, where carrier subsidies and sales generally dominate. It’s working, too. Recent data states that Xiaomi is now second to only Samsung in Chinese smartphone sales. The brand pushed Apple down to third place and is closing the gap on Samsung.

Xiaomi is currently set to expand operations to several new markets. The company launched in Singapore earlier in 2014 and is targeting 10 new markets by the end of the year, including Brazil, Mexico and Russia. VP Barra stated in April that the company intends to utilize the same business model in the new markets.

The company is young and clearly learning as it goes. Xiaomi is in proven hands with Lei Jun as CEO and ex-Googlers Lin Bin as President and Barra leading its international expansion. Four days after a public shaming, the company removed all seemingly stolen images and photographs from its website. The Mi 3’s product page no longer shows an Apple logo for the phone’s lens.

Xiaomi doesn’t yet have the clout of Apple or Samsung, and if the company is intent on continuing with its current strategy of stealing the work of others, it will need to stay within countries where that’s acceptable. In the U.S., however, it will learn one more thing: the electronics giants are litigious and have deep pockets. The real battle, then, could still be coming.

Even if Xiaomi does not like the sweeping sensationalist statements comparing it to Apple, the company has earned the distinction. And for the most part, it’s a compliment. Apple, which has also blatantly copied other companies in the past, created a global empire that so far few have challenged. By many accounts, Xiaomi could, one day, challenge Apple — especially if it gets its feet underneath it with regards to original hardware design.

TechCrunch reached out to Xiaomi for comment but had not heard back at time of publishing.