A small but notable update to the Spotify iOS application is sure to please music fans: the company has just rolled out a new equalizer feature which lets you adjust your music by choosing from one of several presets, or by dragging the points in the graph using your finger for a more precise and personalized setting.

The app also received a a few other features in this latest release, including a redesigned Artist page on the iPad which contains the latest release information and merchandise listings, as well as a new location for the “Discover” section which has been moved inside “Browse.”

But the addition of the equalizer is the most important change, and the only one Spotify alerts users to the first time they launch the app after downloading the new update. 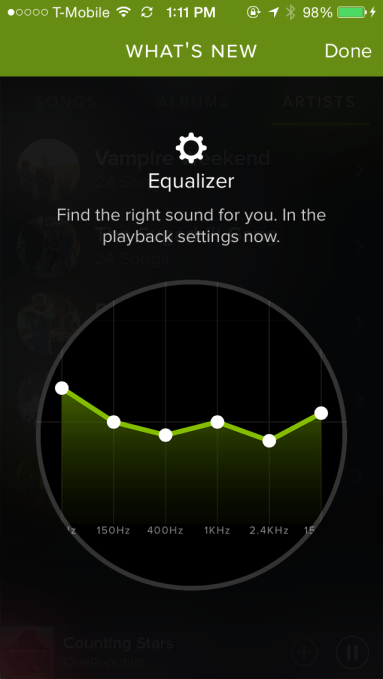 To use the equalizer, you visit “Settings,” then “Playback,” then tap on “Equalizer” to open the new screen.

From here, you can toggle the function on or off using the provided switch, then scroll down to see an array of presets available to choose from including the following: Acoustic, Bass Booster, Bass Reducer, Classical, Dance, Deep, Electronic, Flat, Hip-Hop, Jazz, Latin, Loudness, Lounge, Piano, Pop, R&B, Rock, Small Speakers, Spoken Word, Treble Booster, Treble Reducer, and Vocal Booster.

The function mimics the old settings in iTunes, as you may recall, which also included things like Jazz, Small Speakers and Treble Booster, for example.

After tapping your selection, the graph will update reflecting your choice’s settings, and you can then exit the screen or make further adjustments to the graph by dragging it up and down using your finger.

The feature will be helpful to those who listen to Spotify using their earbud headphones, as they might find a warmer sound with the Jazz present, or they may want to turn the bass up a bit. Or, if you play out of a smaller speaker, you might want to use the treble reducer.

“A lot of our users have been asking for a built-in equalizer for a while now and it’s currently one of our most requested features on iOS,” says Sten Garmark, Vice President Product at Spotify, in the company’s official announcement.