When I met Pascal Lorne earlier this week, I expected to get an extended pitch for his social networking startup Let. And sure, he ran me through Let’s features and pointed to its early signs of success, but he also detailed the bumpy road that he took to get to this point.

Lorne sold his last company, Miyowa, for $59 million two years ago. Afterwards, he said he made a mistake that’s common among entrepreneurs when they have a successful sale. He wanted to go big right away with his next project, so he hired a large team of developers, setting up a company with a significant burn rate.

This turned into a big issue when, after a year of development, Let launched last November. (It was, coincidentally, a week before Lorne ran the New York marathon). Lorne said the app was aimed at teenagers, but he quickly discovered that wasn’t the audience it was reaching.

At the same time, the company was about to take on $1.5 million in seed funding from outside investors. The way Lorne saw it, he and his co-founders had three options. One, they could take the money and hope for the best, but there was a big risk that they’d end up burning their bridges. Two, they could continue to recalibrate while funding the project themselves. Three, they could shut the whole thing down.

Not wanting to spend more money on the company, the co-founders decided to go with option three. That meant laying off the developers. However, the developers asked to keep the servers up for a few weeks, while they applied for new jobs, so that potential employers could check out their work.

That could have been the end of it, but after those developers got new jobs, some of them wanted to continue working on Let in the evenings. That appealed to Lorne, who had bought out his co-founders’ shares in the company, but he wasn’t willing to spend money the way he had before. So the developers agreed to work on Let part-time, in exchange for equity, leading to its relaunch on March 14. 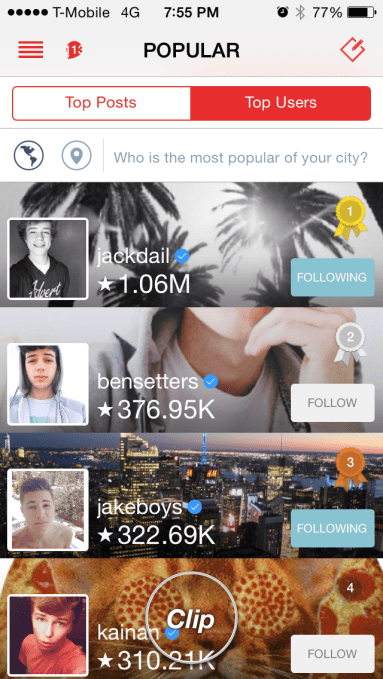 This, I suppose is a good time to explain what Let actually is. Lorne said his goal for the app (which is available on both iOS and Android) was to create “the ultimate, coolest space for teenagers.” While there’s been plenty of debate about whether teenagers are or aren’t abandoning Facebook, Lorne said he’d become convinced (thanks to focus groups he’d conducted while at Miyowa) that “Facebook is not for teenagers anymore. They don’t want to go there.”

Let tries to connect with that audience with a focus on positivity, plus a layer of gamification. As they can on many other social networks, Let users can follow each other and post photos, videos, and more. Then they award each other stars for updates they like, and Let creates leaderboards highlighting the posts and users with the most stars.

Even after the relaunch, Lorne said Let didn’t take off right away — not until popular YouTuber Jake Boys joined, followed by another young social media celebrity, Jack Dail, and they brought their followings with them. Since then, Lorne has been courting what he called the “long tail” of teenaged social media celebrities, i.e., the ones who have amassed a significant following but aren’t quite in the top tier. He said it’s easier to recruit those celebrities, and they’re still feeling competitive about growing their audience.

That strategy appears to be paying off. Let’s user base has apparently been doubling every two weeks, and it’s now in the hundreds of thousands. Lorne declined to offer a more specific number, but he did say that 65 percent of Let’s users are girls, mostly in the 13- to 15-year-old range. And the app has been successful enough that three developers re-joined full-time last month.

I was also curious about how Lorne tries stays with his audience, since he’s pretty far removed from being teenager himself. He said he has a team of 20 volunteer “gurus” who are actively working in the app to maintain its positive culture, and who give him plenty of feedback about what users want.