Back in March 2013, eBay said it would start to work on applications for Google Glass — the idea being that the Android-powered, head-mounted computer could help consumers shop for things online and in the real world more seamlessly than pulling out your smartphone (and even less so, a full-fledged computer).

Now over a year later, the e-commerce giant is rolling out its first effort: a Glass-optimized version of its RedLaser barcode scanning app, where people can search for products online and locally, activated using voice and image recognition. Glassers can download the app here.

The project comes out of the innovation and new ventures labs at eBay, which VP Steve Yankovich describes as focused “moonshots around the idea of zero-effort commerce,” by which he means new services that reduce (or even remove altogether) the clicks you need to make a purchase.

There have been a number of other Glass apps announced that play around with idea of using the head-borne device for commerce. One called Eaze that lets a user “nod to pay” to complete a transaction even claims to have piqued the interest of eBay subsidiary PayPal.

But the significance of having a commerce giant like eBay dabbling in the new technology is a signal to the market. Glass might still be a very nascent concept (only around 10,000 units are out in the wild, and even those have not been universally embraced, and even mocked by some).

This is a sign of how it’s catching the attention of the biggest players who think that it and other wearables (including ways of connecting your own glasses) will be a part of how commerce services will be developed and used in the future.

RedLaser, you might recall, is a barcode scanning app for smartphones that eBay acquired from a startup called Occipital in 2010. RedLaser then got further bolstered with location-specific search by way of another eBay acquisition, Milo.

RedLaser already has apps for iPhone, Android and Windows Phone. eBay does not disclose how many users RedLaser has amassed to date but its focus on applications beyond its basic website is reflected in how consumers are using eBay. The company reported during its Q2 results this month that 59% of eBay customers shopped across multiple screens.

While there is always something exciting about looking at cutting edge, new technology, there is also a very practical business purpose here.

“What we found with mobile is that any time you reduced friction you increased transactions,” Yankovich told me in an interview. This is where wearables, which are even more naturally on your person than a smartphone, come into play. “Every time a wearable shows up, we have to look at it,” he says, even if it’s something that is new and may not fly as a mass market product. “You don’t even know whether this will be a tool for commerce but we have to try.”

The RedLaser Google Glass app has two components to it: the first is that a user can find a product simply by saying the name of it after activating the RedLaser app. (“OK Glass. Find a product.”) 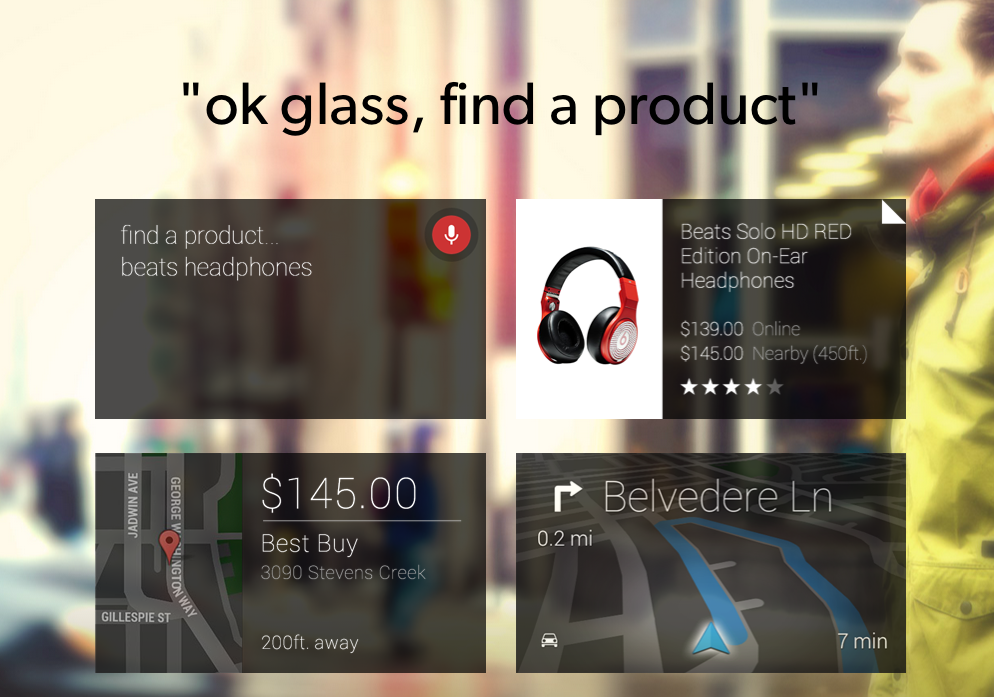 The other, likely more precise route, is to command Glass to scan a barcode of a product in front of you. (OK Glass. Scan a barcode.”) Then, like the other RedLaser apps, this triggers a listing of other places nearby where you can buy the product, or a listing for how to find it online.

For now, there is no direct purchasing features on the RedLaser Glass app. In fact, there is little in the way of any profit elements to these commerce apps. A spokesperson tells me there will be an extension of some of the existing RedLaser relationships to Glass. (For example, BestBuy works with eBay to create special in-store experiences on RedLaser, and that will extend to Glass.)

Yankovich — who calls payments “the holy grail” of commerce technology — says that this will be a step in the future, but not for now.

“The most difficult part of payments is that RedLaser is agnostic in this regard,” he says. “We send users to retailers regardless of what payment options there are.” And apart from that there are the same issues that face other kinds of mobile payments: “duct tape” legacy infrastructure for retailers, and question marks over what really would be the easiest and safest thing for a consumer to use. “Will consumers touch their frames? Will they say something? You still have to wonder what people will actually want to do.”

Payments is one direction these new apps for wearables will go; but another is simply in how they become more sophisticated in other regards. Yankovich hints that one area eBay is looking closely at is image recognition.

“It will be harder to pull off image recognition in that the camera capability now is not good enough,” he says. “But that might be the next step. There will be improved hardware soon and that will spur some kind of evolution and we’ll react to it. We will take advantage of these products.”