Amazon’s first attempt at its own mobile wallet application, designed for use at the point-of-sale, has made a quiet debut on the Amazon Appstore and on Google Play. However, the current implementation of the new “Amazon Wallet” application is fairly barebones – it doesn’t yet support mobile payments or the ability to store credit cards or debit cards. Instead, the wallet only offers the ability to store and organize your gift cards and other store and loyalty cards. 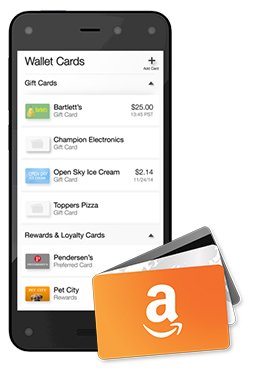 According to the app’s description, Amazon Wallet lets you either scan or type in your gift card, loyalty card and membership card’s information to “reduce the clutter in your leather wallet or purse.” The cards are then available in a digital format as a barcode, QR code, text or image. For dozens of supported merchants, consumers are also able to check the balance of their stored gift cards.

In addition to the mobile application, Amazon has also has a website for its Amazon Wallet service at www.amazon.com/wallet where you can log in and then add other gift cards to your account to have them appear in the mobile app. Here, you can manage your other payment methods – including credit cards, debit cards, and checking accounts – which can be used while shopping on Amazon.com, though not at point-of-sale.

Though these additional payment methods aren’t available in the current implementation of the Amazon Wallet application, the company is known to have broader ambitions aimed at establishing itself as a payments competitor to the likes of PayPal or Google Wallet – especially in terms of peer-to-peer (person-to-person) payments, as well as an alternative to Square and others, where the Kindle tablet would serve as a merchant’s point-of-sale.

Amazon Wallet, as a consumer-facing piece to this larger puzzle, is only in its early stages. It is a hint of what’s to come, if not the finalized product. 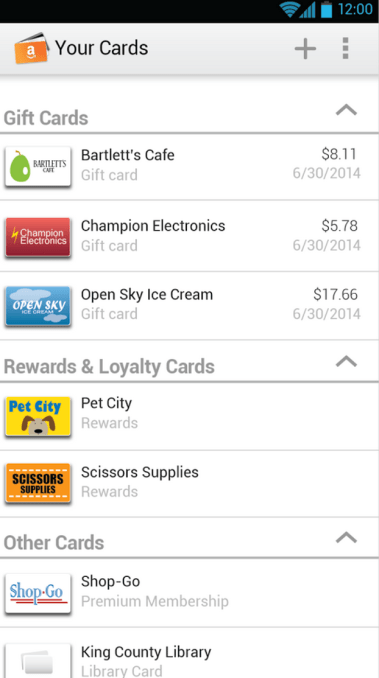 The new Amazon Wallet app is currently listed as being in “beta,” and is also one of the apps that ships pre-installed on Amazon’s new Fire Phone devices. The wallet actually appeared on both app stores on July 17th, but has only recently been spotted by a number of Android fan blogs, including Android Police, Android Central, and TalkAndroid, to name a few.

Those who have added commentary alongside the news of the app’s existence say it’s a pale competitor to the current wallet alternatives on the market. Some also find it odd that Amazon would be trying to move into the offline world when so much of their business is centered on the web.

But as noted above, Amazon’s payments plans have for a long time included targeting its merchant customer base, including when they engage in offline, local commerce. These plans stretch back several years, in fact, though we haven’t yet seen Amazon take those final steps into the world of offline commerce. But with its new Fire Phone, which can scan and identify physical products and match them up with online inventory, the company is now taking steps to connect its web-based and mobile services to the products – and apparently, soon, the payments – in the real world.

When asked for more information about Wallet, Amazon declined to share any further information about the product roadmap, saying “in addition to being pre-installed on Fire Phone, we are offering a beta version of the Amazon Wallet app for Android phones in the Amazon Appstore and on Google Play. We look forward to getting customer feedback on the beta app.”