Two years after acqhiring read-it-later startup Spool, Facebook today launched a basic Pocket competitor called Save. It’s a feature for iOS, Android, and web that lets you store links from News Feed and Facebook Pages for Places, Events, Movies, TV shows, and music to a list where you can view them later.

While Save doesn’t cache content behind links like Pocket or Instapaper, it should give all Facebook users a quick way to stockpile links and content they find so they don’t have to interrupt their News Feed reading flow. As it rolls out over the next few days, Save could let people browse the feed in shorter bursts without worrying about forgetting things they don’t have time to explore right away. 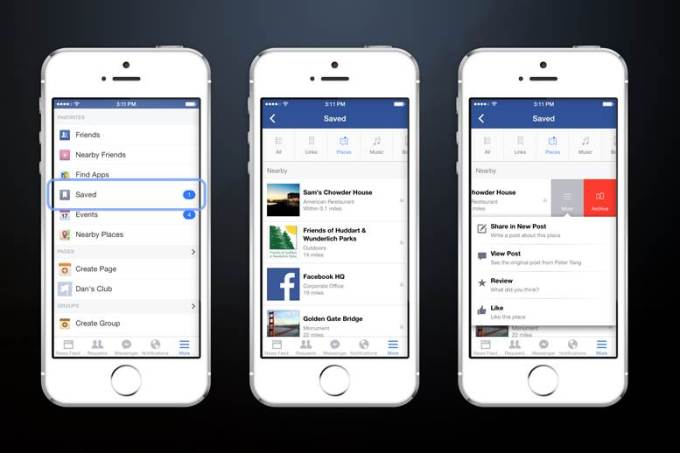 Facebook tested a version of Save back in 2012, and in March of this year I reported that Facebook was trying a new design that looks quite similar to what launched today.

The “Save” button or a little bookmark icon button resides in the bottom right of stories in the mobile and web News Feed, and you can also Save by using the drop-down menu accessed from the arrow in the top right of each story. On Facebook Pages for Places, Movies, TV shows, and musicians, as well as Events, there’ll be a more prominent Save button next to Like or the RSVP options. A link to Saved items appears in the  web homepage’s left sidebar list of bookmarks, and the More apps list on mobile. That More list is where features like Nearby Places and Nearby Friends have been buried, and Save too could get forgotten by average users. 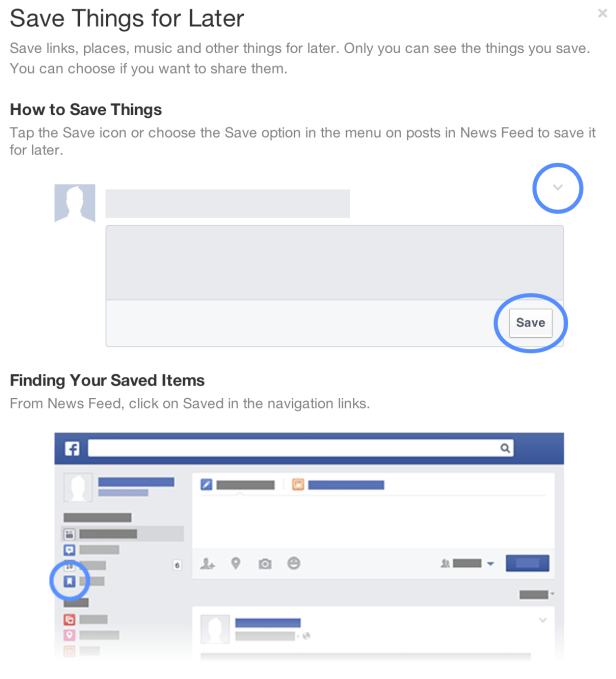 What you Save is only visible to you. From your Saved list which is categorized by content type, you have the option to share an item with friends, or archive it. You’ll need web connectivity to visit any links you Save, as Facebook isn’t currently caching them. Facebook will remind you to check out what you’ve stored with occasional News Feed posts featuring carousels of your Saved content.

Going back to read links you didn’t have time for makes sense, and Saving Places could help you compile restaurants and attractions to check out in your city or while traveling. But I’d bet few people will use Save to store movies and TV shows to read later. How hard is it to remember “everyone says I should watch Game Of Thrones”? And you can just RSVP “Maybe” if you’re considering going to an event, unless you’re really paranoid and like to travel by cover of darkness. 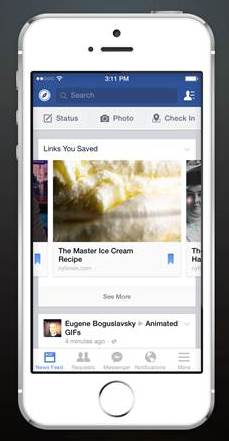 I’ve asked Facebook whether websites and Page admins will get analytics on how often they’re Saved, which could help refine their content and promotion strategies, and better understand what to share on Facebook. It tells me “Not at this time.” There are currently no plans for an API or external Save button that developers could use to let people add to their Saved list from outside of Facebook. You also can’t natively export from Save to other read-it-later apps, which would be nice.

When I asked if Saved could power ad targeting, Facebook told me “We use the information we receive to enhance all of the services we provide, including by creating more relevant advertising for people and compelling value for marketers. Currently you cannot target ads specifically to saved content. We will explore this more in the coming months but don’t have anything more to announce right now.”

If Save proves popular, Facebook might consider spinning off its own standalone read-it-later app, or at least integrating it into its feed and news reading app Paper.

It’s curious that Facebook took so long to release this feature, especially since the final version isn’t that different from its tests in 2012. Since then Pocket (originally known as Read It Later), has grown to 12 million registered users. That’s massively dwarfed by the potential market for Save, thanks to Facebook’s 1.28 billion users. Still, some early adopters may have already settled into Pocket. It offers caching of content for offline viewing, as wells as content suggestions, tags, favorites, and inbox, plus a $5 a month premium tier with permanent copies in case content is removed from the web.

There’s a very good reason Facebook may not be caching content: it would rob its publisher partners of ad views. If Facebook simply scraped the destinations of links for their text, images, and videos, and let you view them on a stripped down page in Save, why would you go to the actual Page? Facebook likely doesn’t want to piss off these publishers since they contribute content to its service through Pages, and buy Facebook ads to grow their audience. 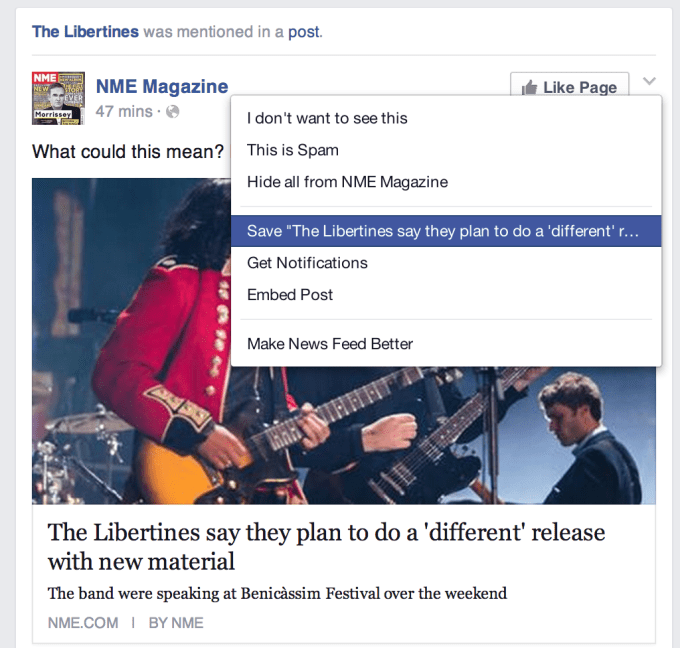 Save might not have the caching that hardcore read-it-later users love, but Facebook may not be focused on this demographic. Instead, it’s focus may be creating a read-it-later feature that’s simple enough for everyone, and designed to increase cross-platform usage and mobile feed reading. Saving could make the feed better by teaching Facebook what you and everyone thinks are high-quality stories.

Save from the web could let users squirrel away links they find to read on mobile during their commute or odd moments of downtime. That creates a new use case for Facebook’s apps, where you visit to specifically to read longer content and actually learn something rather than just breezing through the feed.

Saving from mobile could make feed reading more valuable when you only have a few moments, like while waiting in line for coffee. Right now, it can be a bit daunting trying to get something out of News Feed if you’re on the go. Knowing you can Save links for later and skim by them in favor of quick-to-consume content like photos and status updates could make brief feed sessions more pleasurable. And Facebook only needs to show you a few organic stories to  slot in an ad alongside your fix of ambient intimacy.