For Ari Tulla, the chief executive officer in NEA’s newest portfolio company, BetterDoctor, the decision to launch a company was a matter of more than just money.

Almost ten years ago, Tulla’s wife began treatment for a serious illness. At the time the couple was living in Europe and spent months looking for a doctor, when Tulla’s job with Nokia took him to the U.S. they had to relive the process again in the labyrinthine maze of the U.S. healthcare system.

“I became a super-user,” says Tulla of the hours he spent trolling the California peninsula looking for specialists. “We saw 40 different doctors [and] along the way I decided that this is a pain point.”

According to Tulla, some 70 million patients in the U.S. will switch their physicians or seek additional consultations or treatment, and BetterDoctor aims to make that process easier — thanks in part to $10 million in new financing led by NEA.

Tulla launched BetterDoctor three years ago in the waning days of Nokia with his partner, another Nokia employee, Tapio Tolvanen to make the process easier. Based on social media reviews, physicians’ social networks, and a host of other public and private data, BetterDoctor offers would-be patients a one stop shop for vetting, selecting, and booking appointments with doctors based on user criteria. 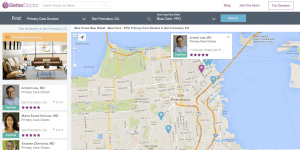 The company isn’t without competition, companies like ZocDoc provide online scheduling services and organizational tools for doctors’ offices, while HealthGrades, offers online services to select a physician. The company sees itself as a combination of the two, like an OpenTable and Yelp service for the buffet of medical services offered under a customers’ health care plan.

BetterDoctor pulls its information from a number of sources including Yelp, Doximity, and Federal health professional registries. The database serving information to the site’s users took nearly a year and a half to put together. That initial legwork was financed by a broad consortia of seed stage investors including Burrill & Company, Commerce Ventures, Kima Ventures, Lifeline Ventures, 500 Startups, MESA+, and SoftTech VC.

While the company’s basic service is free, there are new premium offerings on the way that will cost money for both prospective patients and for doctors. Six months ago the company allowed doctors to create and change their profiles. Soon, BetterDoctor will begin charging for premium sites for doctors that have been vetted as top-quality physicians by the service.

While Tulla does expect to see a shakeout in the industry, he’s not worried about things in the admittedly heavily invested healthcare information technology market becoming overly frothy anytime soon.

“You’re looking at a funnel here that is $800 billion a year,” he says. “There’s no one company that will own that market.”