With more of our attention being gobbled up by smartphone screens it’s no wonder phone displays have gotten bigger. But there’s a natural limit on how big a phone’s screen can get before you’re basically holding a tablet. And not everyone wants such a whopper.

Wither next, then? Well, what about using two screens, rather than one? Meet InkCase Plus: a second companion screen for your Android smartphone that’s designed to slot into a case so you can stack one pane atop the other, sandwich style. Currently it’s just a Kickstarter prototype, with its makers looking for $100,000 in crowdfunding to get the device to market.

But what about battery life, I hear you cry? Won’t this just mean a dead phone in double quick time? No, not so fast. This standalone second screen is an e-ink display — which means it’s more power efficient than the other eye-popping pane of glass you’re used to poking and prodding.

Sure it’s not so colourful (it’s monochrome) but if you’re just reading some basic text or notifications that doesn’t necessarily matter. The second screen is apparently good for 19 hours of continuous reading.

Now it’s worth saying we’ve seen this idea before. In fact Russian startup YotaPhone makes a dual-screen smartphone that incorporates an e-ink screen onto the rear of the phone — which is especially neat (not least because it’s not so chunky).

However G-Jay Yong, CEO of Oaxis, the company behind the InkCase Plus, reckons the standalone Yota-concept-clone has advantages over a single combined device — since you can view your two mobile screens side by side if you like. In other words, it doesn’t have to be one or the other.

“YotaPhone is trying to create a dual screen which is a front and back screen, so you cannot detach the screen. You cannot use the two screen comparatively,” G-Jay tells TechCrunch. “You just have the option that you want to use the e-ink panel or you want to use the current LCD.

“What we are doing is we are creating one universal device that can fit to all different entry phone. So if you’re using a Samsung Galaxy S5 or S4 you don’t need to change your phone. You can just attach a new InkCase Plus on it. And we can use those screen comparably — for example when you’re watching a YouTube video and there’s messages or notifications coming in you can actually read on the InkCase Plus.”

So it’s basically two screens for mobile multitasking then.

Other examples of use-cases for two separate but connected (via the medium of Bluetooth Low Energy) screens could include games or learning scenarios where an image appears on one screen, and the other is used as a flash card to display text, for example, as an “interactive platform”, says G-Jay.

Another use he posits is as a companion e-reader for reading e-books or other text articles. The company has also built a bike computer app for the screen which means the user’s phone can be kept safely on their person or in their bag, while the InkCase Plus is mounted onto the handle bars to display info like speed. 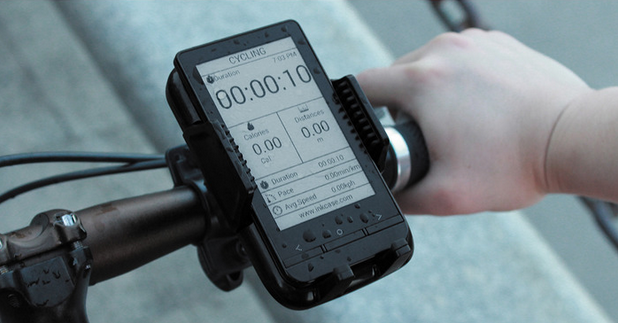 The InkCase Plus is also a sequel device to an earlier InkCase, but the new focus for the Plus is on a modular design, so the user can detach the screen from the case and use it in various alignments. Its makers also want to build a platform this time round, with an SDK for developers and user downloadable apps.

There are currently just three different apps built for the device — a ‘transfer photo’ app, so you can use the second screen as a personalised case cover for your main phone (for instance); an e-reader app; and the aforementioned bike computer.

The device does not run Android but a lightweight real-time OS — which means the number of apps available are going to remain limited to whatever Oaxis and its community of devs (assuming it can recruit them) makes for it. Much like the Pebble smartwatch, really.

The e-ink screen is not touchscreen but the device includes some physical keys so you could, for instance, answer or reject calls — and use the e-ink device as a remote for taking photos on your smartphone, or controlling music.

Oaxis made an e-reader back in 2008 — and it was that initial device which ultimate sparked the idea of building a second companion screen for a phone after users of the e-reader kept asking for more functionality to be added, according to G-Jay.

If the InkCase Plus makes its crowdfunding goal, they’re aiming to ship to backers starting from October. How much is this second companion screen going to set you back? It starts at $79 for early pledgers, stepping up thereafter.

One of the reasons for Oaxis running a crowdfunding campaign is to identify which Android phones to build dedicated InkCase Plus cases for. If you want it to snuggly fit your particular Android device you’re going to have to lobby the makers. At the moment, they just have a couple of different cases that fit the Galaxy S5.