Imagine walking into a room, having it recognize you, then customize itself to your particular preferences. That’s not the future — it’s happening now thanks to an up-and-coming startup called Robin, which provides a “software layer for office buildings.” The Boston-based company has raised a $1.4 million seed round from Atlas Venture, Deep Fork Capital, Boldstart Ventures and Space Pirates. The funding will allow Robin to continue product development, grow the number of its Robin-powered offices, and do a small amount of hiring.

Designed for use in the workplace, Robin uses iBeacon and BLE (Bluetooth Low Energy) devices to detect nearby people and things. It can automate conference room bookings for users just by them walking into a room. And after they enter, Robin can update the screens in the room and the nearby devices to give them control.

Robin was spun out from twin brothers Sam and Zach Dunn’s earlier company One Mighty Roar, an agency that did work for brands like Budweiser, Facebook and Chipotle. That company was self-funded and profitable since 2009, but this year the 15-person team switched its focus to Robin, which is now its own company. Robin’s co-founding team also includes other One Mighty Roar partners Brian Muse (CTO) and Apollo Sinkevicius (COO). 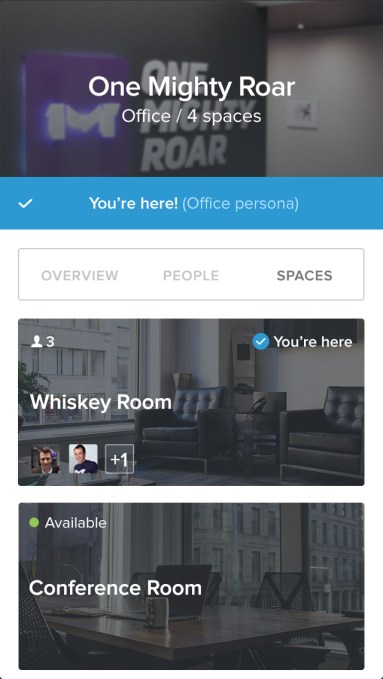 “We did a lot of digital at events with brands starting in 2011,” explains Sam. “We originally latched on to the idea of ‘signing into the real world’ with RFID wristbands.” Those bands could be associated with digital accounts like Facebook at events and concerts, allowing guests to swipe their disposable wristbands at photo booths, survey areas, and other venues, he says.

When Bluetooth LE emerged, the team wanted to make the shift from RFID bands to a software-only play, which is how the idea for Robin got off the ground.

With Robin, the idea is to charge businesses anywhere from $100 to $1,000 per month, depending on the number of zones (areas and rooms) they’re tracking. A free tier for just a couple of zones will also be made available this fall.

In order to get stated, users have to install the Robin app on their iOS or Android phone so the spaces can identify them. As for hardware, only beacons are required — with one beacon covering a zone of up to 30 meters. An accompanying dashboard provides an office-wide overview and analytics for the Robin-powered rooms. And as more connected devices are added to the workplace, Robin can be customized to control them as well, including things like Chromecast, smart thermostats, lights and more. 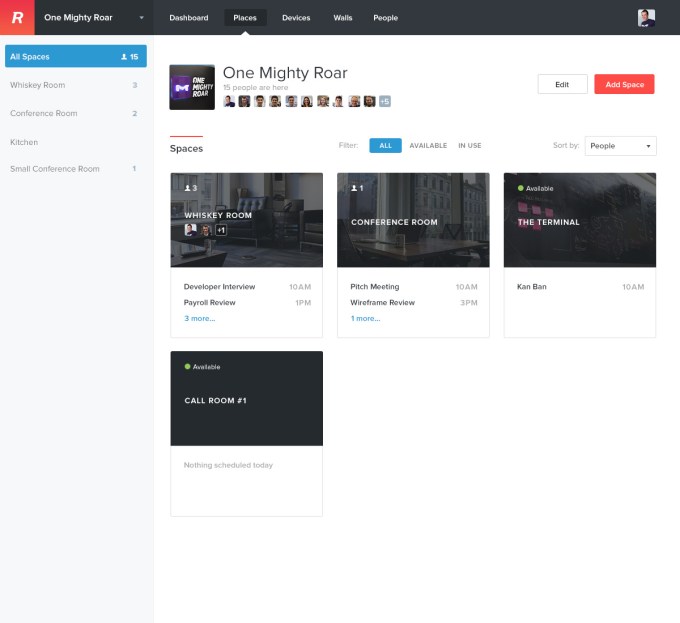 The company is now preparing to launch the first of its Robin-powered offices with a limited number of beta test participants, including a floor in News Corp., Blade (from Kayak co-founder Paul English), and plans to add a couple of more co-working spaces every other week throughout the summer. The summer pilot program now has about 20 locations signed up, says Sam, while the wider release for this fall currently has a wait list that’s just shy of 100 offices.

Robin is currently accepting sign-ups for its wait list here.

Update/Correction: The company raised more funds in the days prior to publication; post updated with new amount – $1.4 million, not $1.35 million.