Founders Andrew Kurland and Joe Marrapodi created their e-commerce negotiation site, Greentoe, out of frustration. The two were spending too much time trying to find the best deals online. That was proving time-consuming and difficult.

Yes, it’s a weird name for an e-commerce site. Marrapodi says it has to do with a college nickname. We’ll get to that in a bit, but for now he says to “Think of Greentoe like Priceline for Amazon.”

The site works like this: You want to buy, say, a new Canon EOS Rebel camera and you want the best price you can get. But you don’t want to spend a lot of time looking. Greentoe recruits a bunch of vetted online retailers. It then simplifies the process by showing you the average price and the lowest price for each product currently available online. You are then able to say how much you are personally willing to pay for that product.

Going with our EOS Rebel theme here, you see that the price for the kind of camera you want is around $549-$594 online. We found it on Amazon for $749 (and that was with a $50 savings offer). You decide you would like to buy this camera for the much lower price of $460. The Greentoe meter will let you know whether you’ve got a good chance or not to get that price. You are lucky on this one. The seller agrees to the price. Congrats, you’ve made a deal! 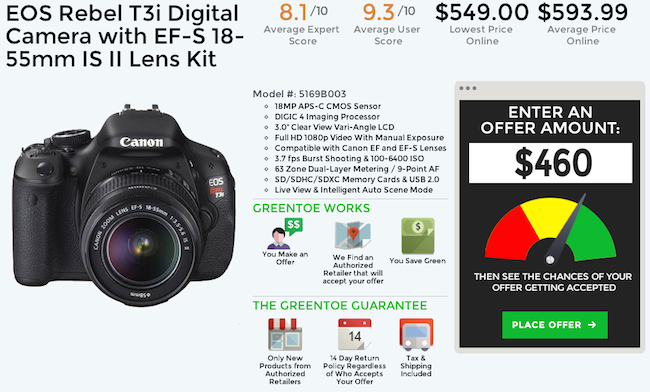 So how can two startup guys with little e-commerce background do better than what you’d find on Amazon or eBay? Marrapodi, who, by the way used to negotiate with celebrities like Leonardo Di Caprio, Scarlett Johansson and Justin Timberlake, says it’s a timing thing. “Retailers go through a cycle of inventory they need to sell and when you send in your price you could hit them at the right time to make a good deal out of it. We try to make that a more likely possibility.” he explains.

This can work with a whole slew of different products on the site. Folks are already haggling down anything from baby cribs to washers and dryers. While the two founders are working on getting more products in, a major hole in the site is women’s designer fashion. Women’s clothing is the largest market segment in terms of sales, accounting for nearly half of all industry revenue in 2013.

Marrapodi acknowledges that he and his partner still have a long way to go to fill in the gaps, “We just started with Y Combinator and have only been live online for a short while here.”

While Greentoe won’t reveal who the retailer is behind the wall, the founders swear they are all very reputable. You also get to find out who sold you the product only after the offer has been accepted.

The deal between both buyer and seller also needs to be reasonable, says Marrapodi. “About 20% of our customers bid too low. They think it’s a crazy deal site and they’re just going to get whatever price they name. That’s not how it works.” he says.  So bottom line is be reasonable when negotiating here.

So what’s with the name…Greentoe? From the words of Marrapodi, “When we started the company, my co-founder, Andrew and I went through domains that I own. Greentoe seemed to be very catchy. So, we went with it.” He said the name originally came from his college roommate’s sister. She actually gave him Greentoe as a nickname. While we’re not sure exactly the story behind why on that one, there’s still time to negotiate for it.