Google really spoiled developers attending its I/O conference yesterday by handing out a piece of cardboard. Not just any piece of cardboard, though. Pull the tab on this Amazon-esque package, reconfigure its pieces, slot in your phone and viola, your very own cardboard VR Goggles.

Out of the box, Google’s corresponding app lets Cardboard owners do stuff like view YouTube and Street View in their budget Oculus. 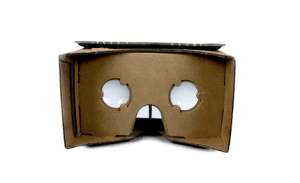 Of course you may have seen something like this before…

In one example, just this May at our Disrupt New York hackathon, we saw something similar: a hardware hack called 3Dioo that used cardboard plus a mirror array to enable any old smartphone to capture 3D. This was coupled with a immersive 3D viewer which repurposed the lenses from a View Master toy. (There are instructions on how to make your own 3Dioo here.)

Google’s cardboard also includes a pair of plastic lenses so it can create an Oculus-style wraparound effect of the stuff you’re looking at on your phone. Its fanciest feature is a cool magnetic button which the phone can sense to allow the viewer to control some of the on-screen elements they are seeing.

Now Google apparently ran out of Cardboard to gift to I/O attendees, such was the popularity of the ‘Oculus Thrift’.

Well, if you missed out on Cardboard — or were just watching and hankering from afar — then never fear. You can easily make your own pair of DIY VR specs.

Indeed, former UK tech journalist Andy Lim — who, full disclosure, is also a long-time friend of mine — made a how to video for DIY VR specs — all the way back in October 2009.

You can watch Lim’s original cardboard VR specs how to video below.

At the time he made this video, Lim was working for UK tech site Recombu where the video was originally published. It’s since amassed some 370,000 views on YouTube, and even made it into a 2012 Popular Science book of hacks.

But the arrival of Google’s #Cardboard could be just the clarion call the maker movement needs to realise Lim’s prescient vision — by pulling out their craft knives and sticky tape en masse and getting folding.

Worth noting that Google does also offer instructions on how to build its version of cardboard AR specs — along with info on where you can get the various parts involved in its construction, including the lenses, velcro strips and magnets.

If you’re wondering what the future-gazing Lim is working on now, you’ll be happy to hear it’s apps — as part of indie developer studio CMA Megacorp. Their latest release is a well-reviewed Lemmings-esque puzzle game called Kiwanuka.