“I’m on my Venture Capitalist like Ben Horowitz,” starts Divine (His spiritual name, a name he considers his real name). This underground rapper from the streets of New York just dropped a video tribute on The Rap Test to say happy birthday to Silicon Valley’s number one hip hop fan, Ben Horowitz.

Divine quotes Horowitz’s inspirational lines throughout the song. It’s an homage to a man Divine says has changed his life.

The lyrics go on, “Legal tender’s, rap that I spit wit gems’ glorious. Pen and spend more of this, till the point of my story is, I came from crack to rap to corner offices.” 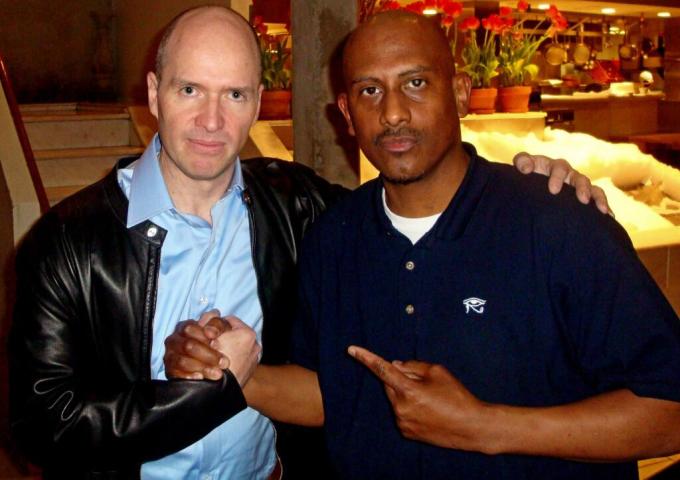 The two struck up a sort of friendship recently. Here’s how Divine describes their bond over rap, in his own words:

Divine: I’m legit, like from the real streets. I would sell drugs. I would do criminal activity just to support my career. When I was younger I would do it to survive to put a roof over me and my younger brother. I completed only 8th grade but I’ve always had a business mind, that’s why I was so successful in the streets, selling drugs. I didn’t know at the time I was going off instincts of business.

So first I hear about this white dude in tech when I was still incarcerated. I couldn’t believe some white billionaire was actually into rap and hip hop. This is when his book came out. The second time Ben pops up in my life and then the third time I hear he’s involved with Nas…so I go to his blog post, it was the one where his friend had been shot, you know that one? And it blew my mind!

Divine says he then sought Horowitz out on Twitter.

Divine: And lo and behold he wrote me back and this was like a two-hour conversation of tweets back and forth. Rakim is one of Ben’s favorite rappers and I just came from doing a show with [Rakim] in January and so [Ben] just started pinging me back and forth. I say, “I’m reaching out cuz initially I wanted you to invest in my record label but now that’s not what I want. I want you to mentor me.”

Divine had just started a Kickstarter at the time to help him raise $7K needed to produce his debut album.

Divine: So I send him the link and then he DMs me and says here’s my email. Let me know about any questions you have. And then he says he gave my Kickstarter a little boost.

Ben actually sent it around and helped Divine reach his $7K goal. Horowitz then invited Divine to listen to him speak and to dinner with him, his wife, R&B artist Ryan Leslie and Fab Five Freddy.

Divine: Of course I don’t impose on people but of course then he invited me out and I’m like cool. I’m talking with venture cap about this stuff. I’m still bugging. He calls me an inspiration and signs his book for me and tells me to write a book about my life. This is the start of a friendship. And then I was on Twitter saying VCs need some theme music.

A16Z’s Deputy Chief of Staff Chris Lyons reached out shortly after and asked Divine to put something together for their podcast. But of course, Divine wanted to do more than that. He produced the theme music for the podcast and then wrote an entire song to pay homage to his new friend Ben.

Divine: And so I said to Chris I wrote the song and I recorded it but I hadn’t even started yet. But I said you know what? Let me get this done and I bang it out in 15 minutes. So Chris mixed and matched it and sends it back to me a week later you know, on my birthday. The next day I get an email from Ben and he says I’m now the official Andreessen Horowitz rapper.

So on June 13, Divine shows some love back to Horowitz with an official song and music video he made for Horowitz’s own birthday.

Divine: Ben didn’t have to do anything for me. I’m changing my whole life. Ben has the power to do that. Ben and I are on the real level. We talk. Ben understands my background and my plight.

Divine says all proceeds for the music video he made will go to Horowitz’s favorite charity, the American Jewish World Service. His first album, “Ghetto Rhymin'” will be released in a couple of weeks.

Divine claims inspiration from Horowitz and his wife and their charities as well. He’s created his own charity called HOPE Through Hip Hop to help street kids and the formerly incarcerated.