Simple, the online banking service acquired by BBVA earlier this year, had an overall goal of addressing the various pain points found at traditional banks, like minimum balance requirements, fees, overdraft charges, and more. Today, the company is making another improvement as it’s introducing a way to speed up bank transfers between Simple and accounts you hold at other banks.

If you’ve had to transfer money between bank accounts, or made an online payment that came directly out of your checking account, then you’ve likely used ACH technology, even if you aren’t familiar with this term.

The problem with ACH transfers is that money moves slowly – it’s often three to five business days before the transfer is complete. It’s an outdated means of moving money in a day an age when digital technologies, like person-to-person payment apps or bitcoin, for example, let us move money instantly.

Simple took its first stab at the problem of slow transfers last year, when it introduced “Instant.” This service allowed for immediate transfers without holds, checks, fees or wait times, but it only worked between two Simple accounts.

Many banks are capable of accelerated transfers like this, but they sell this as a premium service. A Simple blog post notes that Bank of America charges $10 for a next-business-day transfer, for instance, while both it and Wells Fargo charge $3 just to move your money to another bank. Simple says it won’t charge for transfers, even though it has now sped them up.

So how did Simple speed up the painfully slow ACH process? No, they’re not actually moving these as wire transfers, it’s actually ACH. What they’ve done instead is to improved their technology that connects to the ACH network.

The usual process has multiple steps: first, the sending bank passes an ACH Origination file with your account info and transfer request details to the Federal Reserve; next, the Federal Reserve passes this file to the receiving bank. And then the sending bank waits a few days to confirm the transfer request can be fulfilled before releasing the funds.

Until now, Simple tell us that it processed every transfer request with two sequential ACH transfers to meet a design requirement of its banking partner, The Bancorp Bank. This extra ACH step made transfers slower than it wanted, however. 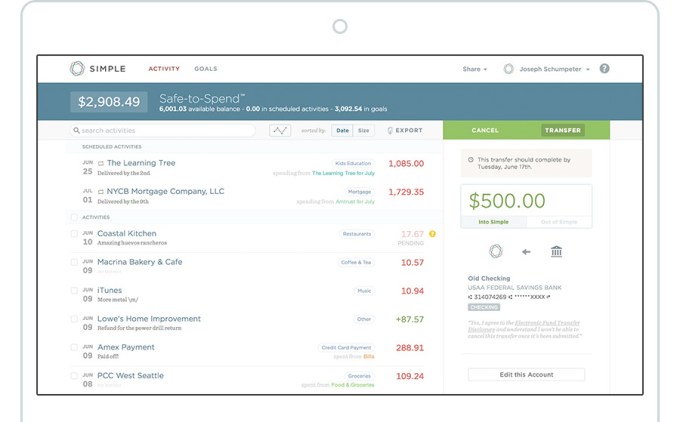 In addition, Simple has also updated its website so it’s easier to understand where the money is being moved to and from and when it will arrive.

These changes will roll out in the next few weeks, the company says.

Simple was a promising startup when it first launched, as it had this idea of giving banking an overhaul – not by becoming a bank itself, but by developing a better interface and series of processes around how a modern bank should work. (Its accounts are actually held at the The Bancorp Bank, Member FDIC.)

But Simple seems to be struggling to gain user adoption, as a recently leaked document found that the startup had just 33,387 active customers as of April. Total customer accounts were pegged at over 100,000, however. And those customers’ deposits were also growing more slowly than expected the document stated.

Certainly, the fact that Simple’s website still advertises the service as being in an “invite-only” status can’t be helping with that growth.

Simple said in the past that regulatory hurdles affected its growth, and responded to the leak by hinting that the numbers reported were out of date. (Though it didn’t correct them). It also said it had plans to expand its marketing efforts this year, including via paid channels.

But at the end of the day, Simple will have to find ways to convince customers to switch banks, or at the very least start moving more of their money into Simple.

A good first step is making the latter far less painful to do, and that’s what Simple has introduced today.