Of all the weird science fiction projects that the future would bring us, the last I expected to see was a seat cushion that would be able to measure your heart beat through your derriere. And yet, the future is here (or nearly here), thanks to a new “smart seat cushion” called Darma.

The main idea behind the Darma cushion is to reduce the amount of strain users put on their back from sitting too long and from maintaining poor posture while doing so. It’s built to keep tabs on the amount of time users spend in their chairs in a non-intrusive way, and to occasionally nudge users to get up and stand or walk around.

Unlike other posture systems, Embedded in the seat cushion are optic fibers that have light passed through them continuously. The system can determine how long someone has been seated, how fidgety they are in their chairs, and how good their posture is based on how the light passes through those fibers.

But that’s not all — the fibers can also measure a user’s heart rate, respiration, and general stress level through the cushion. If that sounds kind of crazy, it is — but it also works incredibly well.

I tested out the monitoring of my heart rate and respiration as measured through the Darma cushion as well as through a heart rate monitor placed on my fingertip. Surprisingly, the results from both were virtually the same. 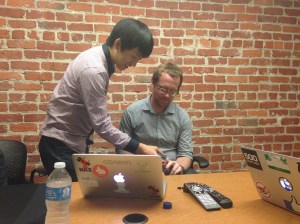 Users will also have access to all that data through a mobile app that connects to the cushion via Bluetooth and tracks trends in their health and well being over time.

I saw the second prototype of the seat cushion, which the team hopes to crowdfund on Kickstarter in a few months. They expect the cushion to cost $249 at retail, but plan to make it available for $149 for early backers during their crowdfunding campaign.

Of course, the plan starts with the cushion, but the team hopes to make the technology available to other third-party furniture makers to get its smarts embedded directly into chairs and sofas and other general seating devices.

The team imagines a world where fiber optics in your bed will be able to measure how well you sleep, to turn off the lights when it senses users are conked out, and turn them back on when they wake up. But let’s face it — that’s some Jetsons-type shit.

For now, they’re just focused on measuring your heart rate… through a cushion.