Meet the Fire Phone, Amazon’s first venture into smartphones. Jeff Bezos calls it the phone built for the Amazon Prime customer. At first blush, it looks like any other smartphone currently on the market, but it has a secret: the ability to track a user’s head.

This is done through four corner-mounted, front-facing infrared cameras and produces wild 3D effects. But it’s not traditional 3D in the sense that images pop out of the screen. The head-tracking tech adds depth to the phone. It’s like looking down a street. But into your phone’s screen.

But are the 3D effects a feature of next-generation user interfaces or a marketing gimmick designed to get people to look Amazon’s way? The phone is an AT&T exclusive for $199 with a two-year contract, and is available to pre-order today. The Amazon Fire phone will also come with one year of Prime for free, which is a pretty solid deal considering all the stuff you’re meant to buy with this phone.

The Fire Phone rocks a 4.7-inch IPS screen and is equipped with a 13MP rear-facing camera with image stabilization and a f2.0 lens. Inside is a quad-core 2.2GHz chip, Adreno 330 graphics and 2GB of RAM — not enough to stand tall against the latest Android flagships but enough horsepower to provide a good experience. 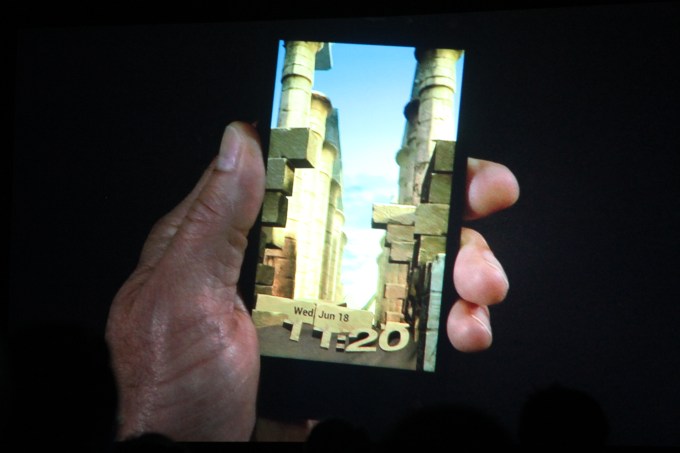 Amazon built what it’s calling Dynamic Perspective, which redraws 3D images at 60 frames per second. You can see elements underneath other on-screen elements. Owners can look under icons on the screen. The four IR cameras have a super-wide field of view and depth perception. Since they’re infrared, they work in the dark.

But the Dynamic Perspective also provides more controls for the user. Owners can tilt the phone to initiate automatic scrolling.

As we reported previously, Amazon will release an SDK for Dynamic Perspective. According to an insider we talked to, Amazon is desperate for developers to latch onto this technology.

The company has built this phone for the Prime subscriber. Much like with the Fire TV, the Fire Phone will ship with a person’s Prime information already entered. The phone is, after all, about selling more wares, and Amazon is ensuring there are no barriers to entry for its best customers, those who subscribe to Prime. It also includes the personalized customer support service Mayday that debuted on the Kindle Fire.

The Fire Phone packs a new feature called Firefly that can detect, through the camera, phone numbers, movies, books, games, CDs and food. It allows Fire Phone owners to buy things instantly that are found in the world. It’s Amazon’s version of Flow and undoubtedly a big marketing hook for Amazon.

There’s a button dedicated to Firefly on the side of the phone under the volume rocker.

Firefly can see art and pull up information about it on Wikipedia. It can listen to a song and open a music app to play it. It can also listen to a show and let you access a specific scene on Amazon. Bezos brags that Firefly can identify 100 million items, and Amazon will release an SDK for developers. 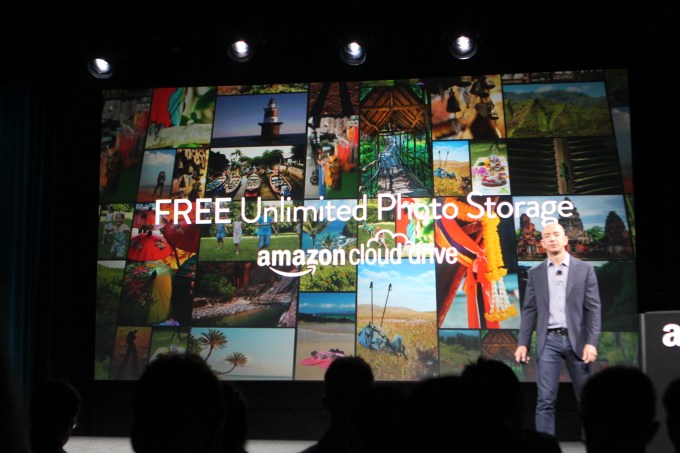 The phone also ships with unlimited photo storage through Amazon Cloud Drive. Combined with the quality lens, Amazon clearly built the Fire Phone with the casual photographer in mind.

Amazon has loaded the it with the most popular music streaming apps: Pandora, Spotify, and iHeartRadio, and more will be on the phone, so it’s not limited to Amazon Prime Music’s small-ish library.

TechCrunch revealed much about this phone over the last nine months. Starting with the head-tracking ability and later revealing all the user elements that would ship with the phone, there was a steady stream of information about this secret Amazon project. We even uncovered the technology Amazon is using for the head tracking. Other reports nailed down the phone’s specs and Amazon’s exclusive deal with AT&T. Few questions remained for Amazon to answer at today’s event.