“You haven’t taken a deep breath in 30 minutes”. This is the smartest thing a wearable has ever told me. Most fitness trackers just pump out near-meaningless numbers. But Spire could actually make you healthier, happier, and more productive. Just clip the subtle little stone-looking device to your belt or bra, and it measures and visualizes your breathing in real-time on its companion app.

Spire can let you know if you’ve been sitting still too long or need to relax because your breaths are shallow. Today, Spire goes on pre-sale for $109. Soon, it could nudge you towards calm and focus like your own personal yoga master. 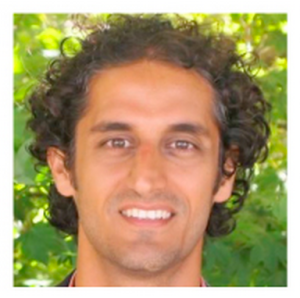 You should see how chill Spire has made its inventor Neema Moraveji. He’s a PhD in augmented self regulation from Stanford. I’ve known Moraveji for a few years. He’s long been an excitable fellow when it comes to self-improvement, prone to forest walks and long conversations. But meeting with him this week to check out Spire, I swear he’s like a walking “Ommmmmmmm”. Check out this short video demo of Spire and interview with him to get a feel for wearing the breath tracker.

Measuring The Mind Through The Body

Moraveji was a research intern at Microsoft and then Google, but then started the Stanford Calming Technology Lab. There he settled upon his quest, “to change the way the world breathes”. He tells me he wants to “give people the awareness and control over their state of mind, and breathing is the simplest way to do it because it’s very measurable and actionable while the mind is amorphous.” 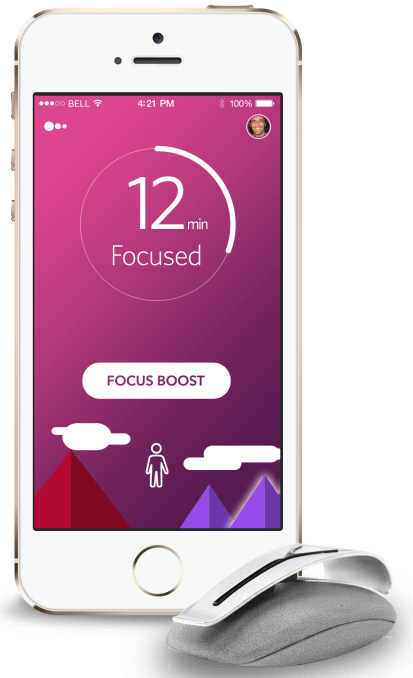 The problem was  that while there were consumer devices starting to track heart rate and physical activity, the only things that could track breath were clumsy medical devices with big straps you had to wrap around your chest. Luckily, that’s when he met Jonathan Palley, a serial entrepreneur based in Beijing who had sold an education startup before. Palley had a hardware and big data team already assembled, plus the manufacturing contacts to make a wearable device with all the sensors Moraveji needed.

The Spire team joined the Stanford accelerator StartX and raised a seed round from an Angel List syndicate that included Facebook Gifts head Lee Linden and a lot of people with medical device backgrounds. Along with money from Rock Health, Spire has raised about $1.5 million. It’s considering getting FDA approval as a true medical device.

Now, after 160 hardware iterations and creation of a companion smartphone app, Spire is finally taking orders and will ship in September at an $150 price point, but pre-orders get a discount. 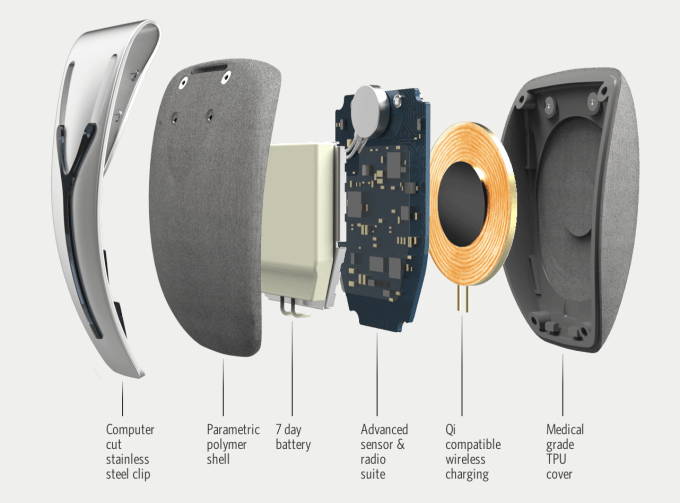 The screenless, buttonless gray speckled Spire is about the size of a remote car door opener, fitting in the palm of you hand. A metal clip attaches it to your belt or bra — anywhere it will move as you breathe. You can wear it facing out on you jeans like a little high-tech fashion statement, or tuck it behind. Spire pairs with your phone over Bluetooth Low-Energy, sending data to its companion app in real-time. 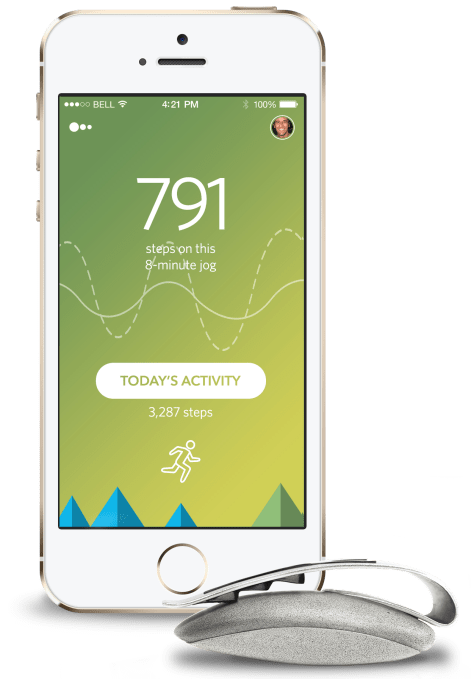 Spire can measure the number of steps you take, how vigorous your physical activity is, and whether you’re sitting, standing, or laying down. Sit for too long and Spire can notify you that you might want to stand up and stretch your legs.

But here’s where it diverges from many fitness trackers. Moraveji explains that “People only move about 15% of their day. How do you build a wearable that creates value for you your entire day?”

The answer is measuring breath. Spire tracks the frequency and magnitude of your breaths, as well as the ratio of in to out. This data is displayed on-screen with your exhales fogging up the glass with about a half-second delay. Just this simple graphic representation of something typically invisible can make you more mindful to breathe deeply. Stay focused, and the screen’s background goes from blue to purple, but will turn red if you’re stressed.

My favorite part of Spire is the breathing notifications. If you’ve been breathing shallow because you’re tense, or haven’t taken a deep breath in too long, it sends a push asking if you want to do a little breathing exercise. Accept, and you’re taken to a game-like screen where you fill bubbles with a series of deep breaths and see a graph of your respiration at the end. Eventually, Spire plans to build a range of fun breathing activities, and partner with other companies to pipe in inspirational wellness content and rewards for serenity. While most wearables are just trackers, you could call Spire a breath taker too because it encourages specific actions. 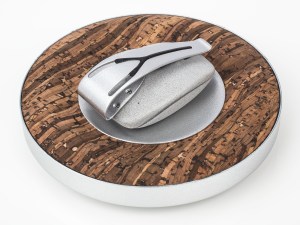 Spire’s battery can last up to a week on a single charge, but when it’s running out of juice, you don’t even have to plug it in. Spire comes with a classy cork and metal wireless charging dish. Just drop Spire in the center, and it will be refilled in a few hours. The dish even has an extra USB outlet so you can plug in a phone charger cable so can replenish Spire and your phone at the same time off one outlet. Spire is also compatible with the Qi wireless charging standard, so it will work with third-party charging mats.

Now to be clear, Spire isn’t perfect. It’s designed to be perfectly comfortable when worn, but the clip can be a bit pokey when worn on the belt, and it might create an odd-shaped protrusion if worn under the bra. It’s also a more aggressive wearable in that it sends you push notifications in an attempt to change your behavior. These could get a bit annoying if you’re in the middle of something important.

Overall, though, Spire‘s approach to wearables is refreshing. In a sea of vague quantified self data, it distills insights from the data into ways you can actually improve your life.