Errands marketplace TaskRabbit is shaking things up today with a change to its business model. The company says it’s shifting away from the auction model where contractors bid for tasks posted by end users, and will now match clients to potential “Taskers” (aka contractors, which the company formerly referred to as “Rabbits”). It will also offer transparent pricing and allow customers to book the Tasker of their choice with just a click.

The move comes after a series of other changes for the company, which included a round of layoffs last summer, a shift away from targeting business customers with a standalone solution, and a decline in the number of bids per task, the company tells us.

The latter issue is what TaskRabbit is attempting to address today with this new model.

Last summer, TaskRabbit realized that while both sides of its business were still growing, its task-completion rate was dropping. The problem, the company realized, is that it was not being efficient in matching supply and demand effectively.

But according to the company, not all its metrics have been in decline. TaskRabbit added over 1.25 million users last year and expects to double that this year. Over 25,000 people earn income via the service, with 10 percent doing it as a full-time job, making $5,000-$8,000 per month by doing 3-5 tasks per day. And task-posting volume has grown by 50 percent since January, touts the official announcement out this morning.

But the auction model was broken. Or, perhaps, TaskRabbit just outgrew it.

In response to the problem, the company spent several months building a new matching algorithm, which suggests the appropriate Taskers for the job, based on its understanding of the Tasker’s past behavior on the site, skill preferences, availability and schedule.

The results will also indicate whether the Tasker is tenured or new, allowing the customer to choose whether they want to test the waters with a new hire for possibly a reduced price. The Tasker’s ratings are also displayed alongside the pricing. 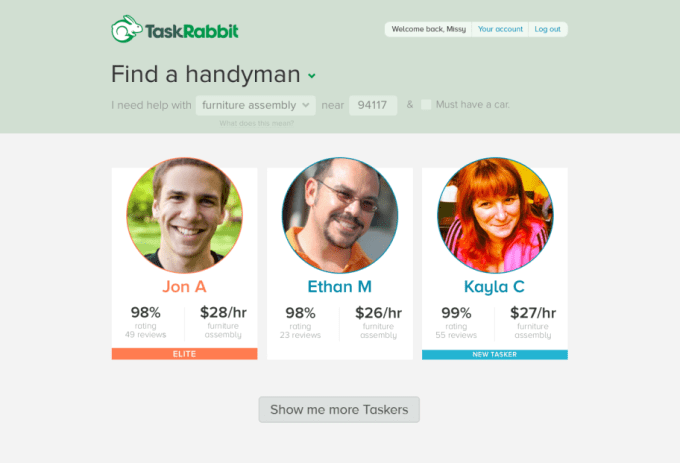 The client then just clicks the Tasker they want and will know who is working their job and how much they’ll owe when the job is complete.

In addition, a new messaging platform will allow for private, one-to-one communication between Taskers and clients, and updated iOS and Android apps will support messaging while on the go. In fact, Taskers will now interface with the service from their mobile phones only; before, they were (again, inefficiently) spending roughly two hours per week scouring the website for jobs.

Another Tasker request is also being fulfilled with an updated scheduling tool. 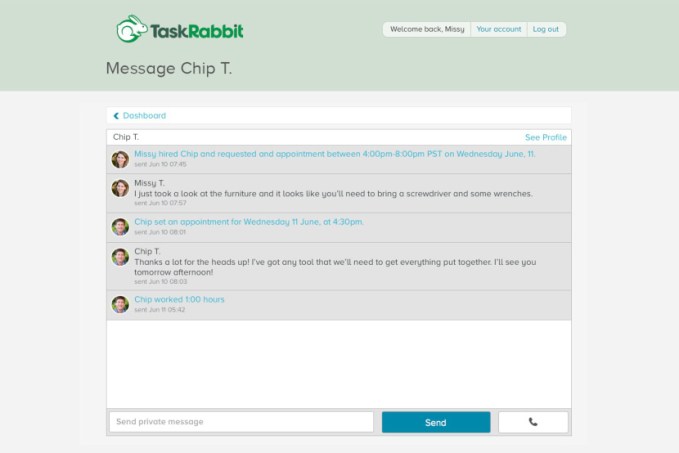 The moves come at a time when a growing number of on-demand apps like Uber, Lyft and one-day delivery services from Google or eBay, for example, have been influencing the urban consumer’s mindset and behavior. People want push-button services, and this is TaskRabbit’s attempt to now move into that space. But as it faltered, others have moved in to compete.

A similar model to the one announced today was initially tested in London starting in November, where the TaskRabbit team found that user numbers were growing faster than when the original service launched in New York and San Francisco. But you can’t necessarily chalk that up to the biz model change alone. TaskRabbit was also new to London at the time, which would see it growing quickly, and every city is different in the way it responds to and adopts new services.

But once live there, completed tasks began to grow, at least. This encouraged TaskRabbit to now take the model to its other 18 supported U.S. cities.

TaskRabbit says the new model, which closely resembles that of Thumbtack, backed by $30 million from Sequoia and others, will go live before July’s end. A change to hourly pricing has already taken place, though, as the company began testing this a couple of months ago. Now, jobs generally range between $15-$25 per hour, and most clients end up paying $40-$60 per task. Plus, Taskers won’t be able to set their rates below minimum wage going forward, and TaskRabbit’s current pricing floor is $14/hour.

The end result, the company tells us, is that Taskers take home more money, but consumers aren’t really paying much more for the service.

As the transition was underway, TechCrunch tipsters told us that TaskRabbit shut down applications for new contractors. For instance, one tipster sent us a message he received earlier this month, which indicated that TaskRabbit application volume was so “high” that the service was putting applications on hold.

That’s not really the case, though. TaskRabbit was just giving itself time to transition its workers to the new platform and closed up onboarding in the meantime.

Today, the company says it has grown to over 50 full-time employees and has plans to bring on 15 more. It declined to provide any additional details about its growth or revenue for the time being.