Facebook wants to break the “1% Rule” of Internet culture that says a tiny fraction of users create the content for everyone else. So after a momentary leak last week, today Facebook officially launches Slingshot for iOS and Android in the US, an app where friends send you photos and videos, but you have to reply with your own before you can see them. “Everyone is a creator and no one is a spectator”, says Product Manager Will Ruben, and that makes it different from Snapchat.

Slingshot’s success will hinge on whether people perceive the reply-to-unlock mechanic as a needless hassle, or as a fun incentive to keep sharing. People may not want to do work to view their content.

The app, whose name leaked to the Financial Times last month, is now available in the US on iOS and Android.

To summarize before I go deeper, Slingshot lets you send photos and 15 second videos to one friend, many, or all the contacts you’ve recently slinged with. Content is ephemeral and disappears after it’s viewed, though you can auto-save what you create. You can find friends through Facebook or your phone’s contacts, though the app uses a somewhat weak privacy-by-obscurity model where anyone with your username can sling to you. It’s got a lighthearted design where you can draw or send split-screen reaction shots to a backdrop of playful music and silly sound effects.

Born of a hackathon and built over the last six months, Slingshot is a bold move for Facebook, as it could cannibalize sharing via News Feed, Messenger and Instagram. But by devising a truly unique mechanic with “reply to unlock,” Facebook may have finally found a Snapchat competitor that’s not a Snapchat clone.

A Solution For One-Sided Sharing

“My brothers are really not technical in any way,” Slingshot inventor and four-year Facebook Product Designer Joey Flynn tells me. “I’d take a photo, upload it in iMessage, and send it to them. And I would just see ‘Seen,’ or in a month I’d see them and they‘d say ‘that was a cool photo’. But hey, I want to see what you’re up to! There was this missing reciprocation,” he explains. That was the spark for Slingshot. In December 2013, Facebook held a three-day hackathon to come up with standalone apps to build with its new Creative Labs initiative, which spawned Paper earlier this year. Mobile users were craving lean, single-purpose experiences that Facebook’s Swiss Army knife of a main app couldn’t provide.

So after having worked on Home, Flynn teamed up with three-year Facebook software engineer Rocky Smith to build a prototype of what would become Slingshot, which was meant to nudge people to share something back when they received a message. The duo shared it with a few colleagues, and had a blast watching each other unwrap presents and bond with family over the holidays. 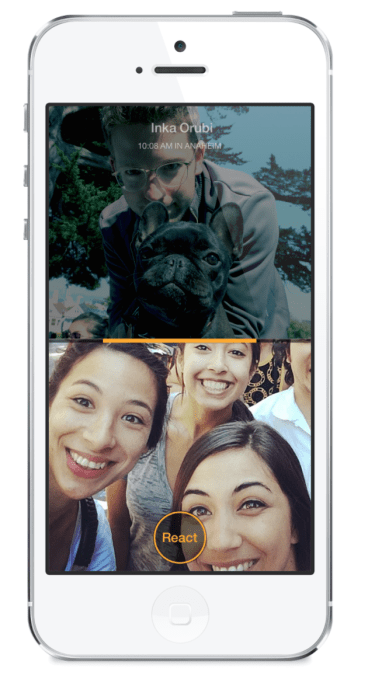 Upon their return to Facebook’s 1 Hacker Way headquarters in Menlo Park, they recruited Ruben as a PM and engineers for iOS and Android, which brought the Slingshot team headcount to five. Over the next six months, they set out to build an app where “there’s way less pressure to create because everyone is creating,” Ruben says.

“It’s really made us feel closer together using the app. Andrew loves cooking steaks on weekends, Rocky does skateboarding around SF, and Joey shaved off his beard is several places. And they know I went to the San Diego Zoo,” Ruben says. “It’s a space where everyone shares windows into their lives, back and forth.”

Unlike Facebook or Instagram, the goofy, ephemeral, Snapchat-esque nature means your posts don’t have to look perfect, as they won’t reflect on you forever.

With so many mobile apps competing for people’s attention, Slingshot’s ability to self-perpetuate engagement could be the key to traction. One friend doesn’t have to do all the work to entertain others, who can consume without creating, breaking the chain. With Slingshot, the conversation never dies because the last message is always waiting to be unlocked.

If Facebook is interesting, and Messenger is useful, and Paper is pretty, then Slingshot is fun. I definitely got a few smiles out of the new app while playing with it for an hour with the team. 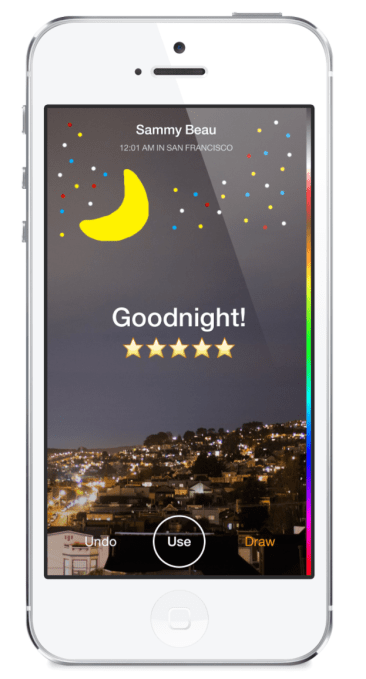 You sign up for the standalone app with your phone number and create a new social graph by scanning your phone’s contacts or Facebook friends for people to share with. That means you don’t need a Facebook account to join. Slingshot will re-sync your contacts occasionally to stay current, unless you stop it. And if you want to add someone by their username, you drag down on the camera screen and hit “Add People”.

From then on, Slingshot opens to the camera with a little counter at the top noting how many pending messages you could unlock by replying. Tap to shoot, tap and hold to record a video, and hit the “Selfie” button to flip the camera away or toward you. You can tap to add up to five lines of text, which will appear small at the top or larger if you drag it elsewhere on the shot.

Slingshot also has a well-designed drawing tool. Drag your finger up or down the right rail to choose the perfect color, and drag left or right to enlarge or shrink the brush size to paint on mustaches, sunsets, or whatever you want. Every touch comes with cartoony pop and swish noises, and opening the drawing tool cues up a wacky soundtrack that sounds like elevator music at a carnival.

Once you tap Use, you’re spirited to classy black list of everyone who’s sent you slings recently, followed by an option to invite friends via SMS and more names of friends you haven’t slinged with yet. Each shows pending sling is shown as a tiny, highly pixelated thumbnail begging to be unscrambled with a reply. 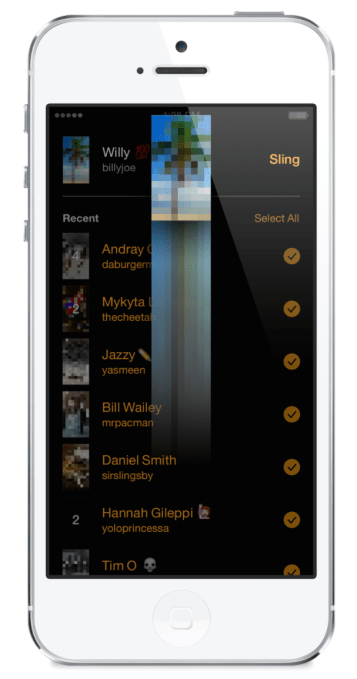 Tap as many names as you want or select all your recent slingers with one touch to send them yours and unlock theirs. An animation flings your photo or video off-screen, and you’re shown a one-by-one series of the slings you unlocked, like a Snapchat Story. Photos can be viewed as long as you want and videos loop until you drag the current one away to permanently delete it and reveal the next beneath it until you’ve viewed them all.

If you see a sling that’s particularly inspiring, you can reply with a reaction shot or video that can viewed immediately. You’ll get the top half of the original sling, and can react with the bottom half of the screen. The team has been loving reaction face meshes, where you line up your chin under the top half of your friend’s face to make a photo Frankenstein or video pretending to talk as them.

The privacy by obscurity model is a tad worrisome. If your username is posted publicly or easily guessed, you could be inundated with unwanted slings since anyone can add you by username. Luckily, you can hide people whose incoming slings you don’t want to see by swiping left on their name (you can unhide people from the settings). And if someone slings you a dick pic or other objectionable content, you can report them.

As for what happens to your content, once everyone you’ve slinged something to views it, or it disappears from their app automatically if unviewed for 30 days, Facebook says it will delete the photo or video from its servers. There is a seven-day delay in case it has to investigate abuse reports, but the team says the content is gone after that. Whether users trust Facebook to keep its word is up to them. Past privacy missteps might scare people, but Facebook is under close scrutiny from the FTC to abide by the privacy policies it puts forward.

Will Slingshot Hit Its Mark?

In terms of feel and functionality, Slingshot is solid, but the make-or-break factor is community. It could go one of two ways.

The reply-to-unlock mechanic could create the right incentive to share back, feeding on our natural curiosity. It’s gamified sharing. The satisfaction of revealing hidden content could be enough to entice people to find something worth capturing. Perfect pics could end up on Facebook and Instagram, particularly intimate ones could go to Snapchat, and Slingshot could pull in our day-to-day moments

Alternatively, reply-to-unlock could be seen as an annoying gimmick, introducing too much friction. Why make a friend work for your photo when you could just text them? The chore could leave Slingshot wasting away in some folder on your screen.

While it might seem tough for Facebook to shatter the 1% Rule, it’s not impossible. Instagram did it by making artful creation so easy that everyone shares. Slingshot enters a much more crowded space. But if it can ditch the idea that slings have to be beautiful or even funny and make people comfortable just sharing random clips of their lives, we might keep shooting.