eBay today is expanding its lesser-known eBay Sell For Me service to mobile with the launch of a new app called eBay Valet, which promises to let eBay do the selling for you. That is, it takes every step of the selling process — from determining an item’s value to listing it online to shipping it when sold — and handles it for you.

Like its web-based counterpart, eBay Valet is designed to make online selling easier and more approachable, not only for first-time sellers, but for anyone who doesn’t have time to handle a listing for themselves. (It’s sort of like the digital counterpart to those stores that would “sell it on eBay” for you, which you might remember from the movie “The 40-Year-Old Virgin!”)

To some extent, eBay’s Sell For Me service is its own take on the various online consignment shops that have sprung up lately, like Poshmark, The Real Real, ThredUp, Threadflip, Twice and others. But unlike those services, neither eBay’s Sell It For Me, and now Valet on mobile, support selling clothing. 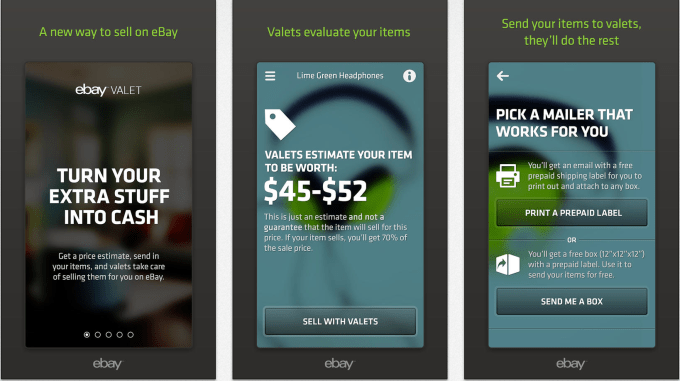 Instead, on its Sell For Me website, eBay has been promoting how it can sell a number of other items for you, including electronics, collectibles, shoes, handbags, sporting goods, musical instruments and even automotive parts. However, it won’t work with just anything, such as bulky items heavier than 25 pounds, those in poor condition worth less than $40, media like DVDs and CDS, high-end valuables, and more.

The new mobile app will have similar restrictions, we’re told.

The app was designed and developed by the IIC (Israel Innovation Center), a unit within the Innovation and New Ventures organization based in Tel-Aviv, which is chartered with rapid prototyping for eBay Inc. For now, the e-commerce giant says eBay Valet is a “pilot” program, and it doesn’t have specific metrics in mind that it will have to hit to move forward.

For consumers, the process of using eBay Valet is easy. To get started, you just take a picture of the item in question, then enter (or speak) your item’s description. Within 30 minutes, your “valet” will respond with a valuation range, and you’ll be asked if you still want to sell it. If you have a box handy, eBay will send you a shipping label. If not, the company can send you a free, prepaid box instead.

You can then log into eBay.com to watch the sale, which takes place under the valet’s account. After the item sells — typically via a seven-day listing — you keep 70 percent of the profits, which are deposited to your PayPal account.

“Even though you’re not selling the item, there’s still an experience of selling,” Steve Yankovich, eBay’s vice president of Innovation and New Ventures says. “You get to experience the listing but do none of the work.”

Plus, he explains, the difference between the eBay Valet app and other selling programs is that on the business side, eBay is actually vetting the items. “We have a person looking at the item, doing research on eBay for condition and our marketplace has good inventory,” he notes.

eBay Valet is something that’s reminiscent of some others startups we came across in recent months. For example, Sold (which exited to Dropbox), was attempting to do something similar, and before it several services tried to topple established companies like eBay or Craigslist (on the local side), Zaarly, YardSellr and EggDrop. To date, none have really panned out. But eBay — because it’s eBay — may have a shot.

The new app is live now on iTunes.