Editor’s note: Peter Yared is the CTO/CIO at CBS Interactive.

As a recent analysis indicated, Google’s traditional search is not working on mobile as well as it did on the desktop web. Sifting through organic search results on a mobile device is a sub-optimal experience, especially when compared to the push notifications and personalized streams of cards that have made mobile apps from Facebook, Twitter and Tinder so habit-forming and successful.

Google is getting well ahead of its mobile organic search problem, especially on Android where it has full control of the end-to-end mobile experience. Google has strung together push notifications, a stream of predictive answers and an answer box in an attempt to answer a search query three times before showing organic search results.

Answer Attempt No. 1 – Notify you that something important is happening before you even ask

Google’s primary push play is its much-maligned Google Now, which is increasingly becoming more functional and relevant, especially for Android users. Google Now uses mobile notifications for important events. This feature has initially focused around calendar appointments and location, with more recent additions such as sports scores for teams you follow.

When you have an upcoming calendar appointment, Google Now checks travel routes and notifies you when you should leave in order to arrive at the appointment on time. Google Now sometimes gets confused about where you are going and doesn’t know when you are going to work or skipping an appointment. However, when it works, the feature really feels like magic. 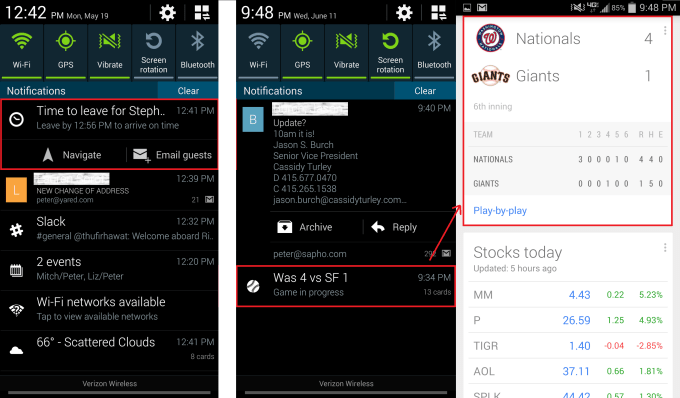 As Google Now learns what you are interested in, this notification feature will likely incorporate big stock swings in your portfolio, major news events of interest to you and important emails from your boss. The calendar notifications themselves will likely be a lot smarter, with features like Refresh or RelateIQ that provide context around a meeting. Right now, Google Now is a lot like type-ahead: when it works, it’s great. When it doesn’t, it’s a real pain. But it is slowly getting better and more context-aware.

Answer Attempt No. 2 – Show you things you might search for before you even search

In an ideal situation, Google Now would anticipate what you want and deliver you a card before you even thought to ask. Perhaps Google will get there one day. In the meantime, Google wants its users to form habits around its Google Now cards as much as possible.

When you type a Google search on a mobile Android device, Google automatically pushes the Google Now stream, which attempts to predict what you might be searching for by showing a stream of updates to websites that you have recently visited, new content for search terms you have searched, real world events such as a new episode of a television show whose website you have visited, and nearby places in case you are looking for a café or a restaurant. Google uses your search history and profile information to build the cards, so the cards are generally very relevant.

Google Now is becoming increasingly anticipatory about new search results you might find interesting by incorporating the Google knowledge graph into search. It can tie various web pages together based on distinct entities such as a band. When you search for a band and listen to its YouTube song, Google Now will tell you when they’re coming to town to play a show. 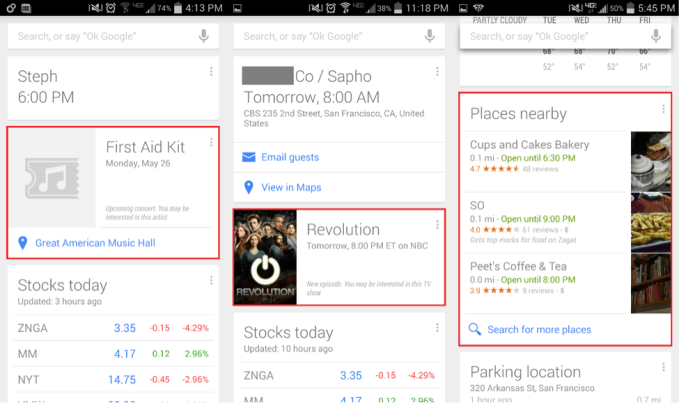 Answer Attempt No. 3 – Answer your query with an answer box

If Google fails at answering what you want with a push notification or its predictive stream of cards, it still shows you a card above the search results. The Google “Answer Box” is where Google really shines, delivering cards that contain the answer to many common and even obscure queries. Google takes in context such as location and responds to voice and written queries with the answer to a question. The thing to realize is that most answer boxes will eventually become a Google Now card, delivering answers to questions before you even ask.

I see no search results – looks just like Google Now! 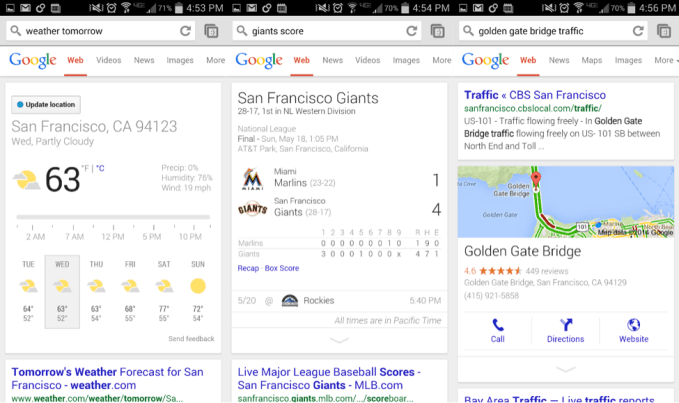 As users become increasingly accustomed to Google answer cards, they will be less and less surprised when these cards start to materialize before they have even entered a search query.

Answer Attempt No. 4 – Show the search results that we once loved and now disdain on mobile 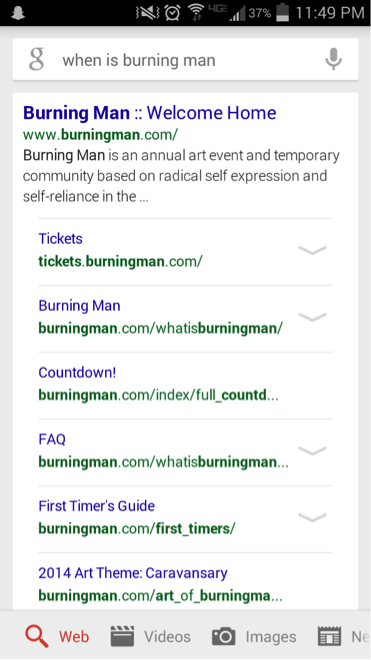 The shift away from showing organic search results on mobile devices will have a profound effect on websites that rely on Google for traffic, on top of the devastation wrought by the Google algorithm updates of the past few years.

Are these “cards” just a deconstructed portal? Yes in some ways, and that’s just great

Wait, haven’t we seen little boxes of relevant data before? Google Now in some ways is the new, smarter portal that figures out what you should know. Google Now doesn’t show your entire stock portfolio, it only shows the top movers in your portfolio. It is not a coincidence that Google launched Google Now for desktop Chrome soon after it killed its iGoogle portal. It is ironic that Yahoo, which essentially invented the portal category, is now trying to reinvigorate its search product, while Google is moving past search and what is effectively a next generation portal.

Google is the stalwart of Web 1.0 and Web 2.0 “Pull Computing,” with interaction hinged around a user deciding to search for something and sifting through results and advertising. Google is now reinventing itself on mobile with a “Push Computing” paradigm. Push Computing, where server computers curate and organize content to send to a client, is the backbone of successful mobile companies.

There were attempts in the late 1990s to push-enable portals with products like PointCast, but they were cluttered with too much content to consume and required too much bandwidth for the time. Google is addressing those problems by curating what is sent to clients with extensive machine learning.

The Google search experience was not going to carry Google into the future, and Google is getting well ahead of the problem by predictively pushing cards into notifications and a stream. And just like they did last time with search, they can figure out how to monetize later. Google Shopping’s answer box is entirely paid (although not in the EU due to antitrust issues) and on a mobile screen there is plenty of room to add a single, very expensive AdWord ad to every answer box. As Google learned the first time around, there are a lot of ways to make money when you’re the on-ramp to everyone’s Internet.