Why tell with text when you can show with video? Facebook Messenger is diving deeper into visual communication with a new option to instantly record and send short videos, similar to Snapchat. The feature comes to iOS today and is rolling out to Android. Messenger added pre-recorded video sharing and a split-screen selfie camera in April, but now you can tap and hold the camera button to fire off a mini-movie.

The updates come days after Facebook’s full-fledged Snapchat competitor Slingshot leaked into some international versions of the iOS App Store before being swiftly removed. The app’s core mechanic is that the ephemeral photos and videos you receive can only be viewed if you share a reply. The accidental release  foreshadows an imminent official launch of Facebook’s latest standalone app which will have to build an audience from scratch. 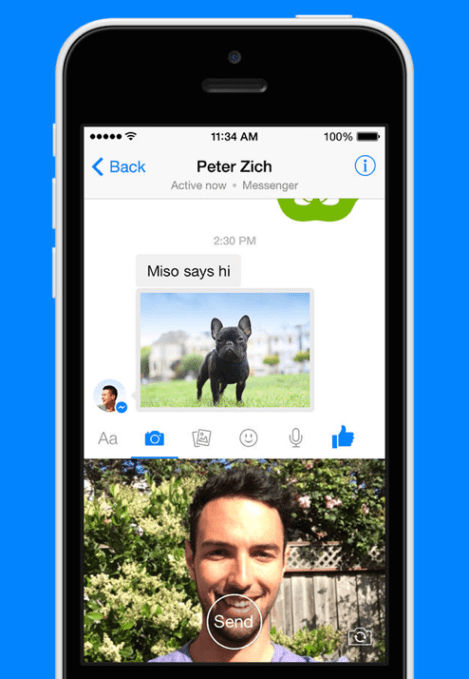 But quick video messaging has already proven itself a hit, so Facebook giving it to Messengers 200 million-plus users. The camera defaults to the front-facing selfie mode, but you can flip it around to show off what you’re seeing. This is not the synchronous video chat Snapchat most recently added, but instead asynchronous in-app video messaging. Also in this update is the ability to tap and hold the ‘thumbs up’ icon to send a bigger Like instead of typing “k”, “cool”, or “alright”.

Snapchat has found huge success through visual conversations where people shoot photos and videos back and forth in rapid succession, like text messaging but more personal. Still, while Snapchat has grown popular, it’s widely thought to still be smaller than Messenger in total user count, and dwarfed by Facebook’s total population of 1.28 billion.

Companies get a lot of deserving flack from journalists  for cloning each other. In the end, though, what matters is making the largest number of people happy. Great artists steal, right? But no matter what Facebook steals from Snapchat, it’s the fun-loving, trend-setting community that’s invaluable.