Those interested in buying an Amazon Kindle e-reader or tablet can now pay in a series of five equal monthly payments instead of one lump sum at checkout.

According to the promotion page (shown below), this payment plan doesn’t require a credit check and doesn’t add anything to the price of the gadget, making it a pretty sweet deal for those on a budget looking to pick up a device. 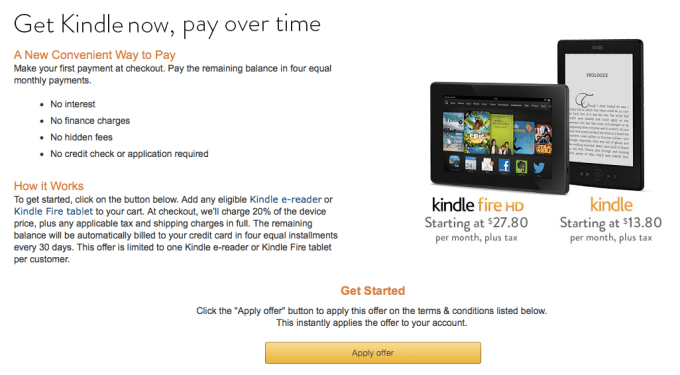 This isn’t the first time Amazon has offered a payment plan for the Kindle line. Late last year, the company launched a similar payment plan just for the Kindle Fire HDX line of tablets, though that plan had customers pay more up front (25 percent versus 20 percent) and spread payments out farther (every 90 days instead of every 30).

Why would Amazon want to risk giving out hardware for one-fifth of the actual retail price with no guarantee that it’ll get paid in full? Simple: Kindle users spend $443 more per year throughout the company’s ecosystem than those without.

Making it even easier for someone to get a Kindle or Kindle Fire makes it more likely that they’ll spend money on both real and digital goods on Amazon’s store.

And if it turns out that people reliably pay for their Kindles in full, the company can roll it out to even more products — like its coming smartphone, which will likely be announced June 18.