Netflix has just introduced a new standalone mobile application called “OITNA” (or “Orange is the New App,” ha ha) which, if you haven’t guessed it, is an effort to promote the network’s original show “Orange is the New Black,” now available in a binge-worthy Season 2. OITNA is essentially a photo-sharing application, which lets you customize cards with your own messages and photos, replacing a character’s head with your own or your friend’s face, for example.

Some of the cards are pre-filled with meme-ready expressions and images from the show, which has already attracted a legion of fans who run their own websites, and share GIFs and clips across Tumblr, Twitter, Pinterest and elsewhere on the social web.

After you’ve customized your card, you can then send it out via Facebook, Instagram, Twitter, WhatsApp, SMS and more. Of course, all the images are tagged with #OITNB and the Season 2 start date, as anyone who ends up using this app is essentially helping to provide free advertising for the network. 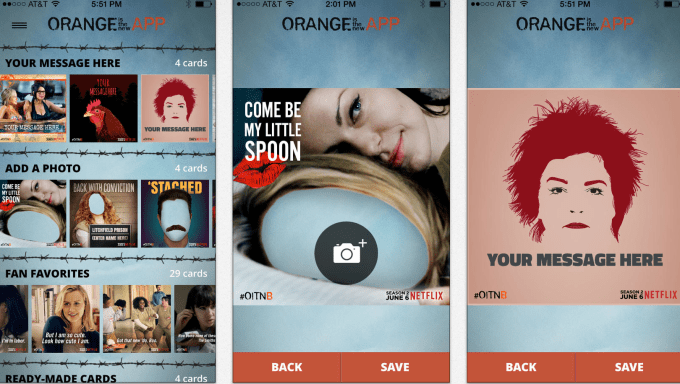 As you may recall, this isn’t Netflix’s first foray into standalone applications created mainly as marketing stunts. When the company was busy promoting the new season of “Arrested Development,” it also cleverly introduced a “FakeBlock” app on iOS and Android, which referenced a plot line in the series. (As fans know, George Michael’s app wasn’t sophisticated privacy software, it was a virtual block of wood.)  Netflix’s version of his “FakeBlock” app, however, let you tap the wood for access to video clips, photos and more.

Like FakeBlock, OITNA is also available as a free download on iOS and Android, the latter of which is now hovering between 10,000 and 50,000 installs following its late Friday launch.