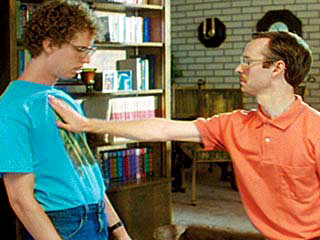 This one could get messy.

Yesterday afternoon, Qz reported on a message that some Netflix/Verizon customers were seeing which pinned potential video quality issues on Verizon’s network being “crowded.”

Verizon, as you might expect, was none too happy to hear about this — and now they’re threatening legal action.

The core of Verizon’s complaint: There are tons of points of failure along the road that could cause network slowdown, and if Netflix is going to point the finger at Verizon, it’s up to Netflix to prove it.

In a letter from Verizon addressed to Netflix’s legal counsel, Verizon gives Netflix five days to do the following:

If Netflix decides to comply with Verizon’s demands, that last one could prove hard to fulfill. Depending on how the error message is triggered (a quick client-side packet test, for example?), it’s feasible that Netflix isn’t actually keeping track of who sees it.