The current crop of smartwatches on the market can justifiably be described as uuuuugly.

That’s set to change as design focused alternatives such as the circular Moto 360 launch, to try to convince users that they do want to strap a mini computer on their wrist, helped along by Google’s new made-for-smartwatches platform, Android wear.

Or, indeed, if Apple dives into the space — with its long rumoured iWatch. Whatever wearable Cupertino pops out it’s certainly not going to look anything like this.

While the market continues to experiment and heat up, German app developer Zuhanden is aiming to get an early jump in the smartwatch watch-face app space by launching as a free smartphone app today, for iOS and Android. The app replicates a classic approach to timepiece design in the digital sphere.

The app, called Circles — Smartwatch Face And Alarm, is minimalist eye-candy if you’re into classic timepieces. The developers have also come up with a neat swipe interface for a circular display that looks like it would translate well to the Moto 360 when that lands.

“The current version is for phones and tablets. In this way we can gain a deeper understanding of our users and will be spot-on when the Moto 360, iWatch or another modern smartwatch actually launch,” says founder Hans Koenig.

“The app’s focus on precise timing & astronomical functions combined in a timeless watchface is something truly unique on the App Store. Also, it is the first app that interprets a mobile touch interface for a circular form factor.”

The secondary watch face also acts as a shop window where the developers can showcase additional features available as in-app purchases and monetize the free app — such as a fancy phases of the moon dial, or an overview of real-time planetary positions in the solar system. There are also various alarms.

After this initial release, they’re planning additional watchfaces for Circles, such as offering a classic watchface design that targets women (hopefully not by making it pink).

They say they will be designing watchfaces with specific smartwatch hardware in mind, as and when it emerges. Their current hope being for a round Apple iWatch.

Time will tell on that one. 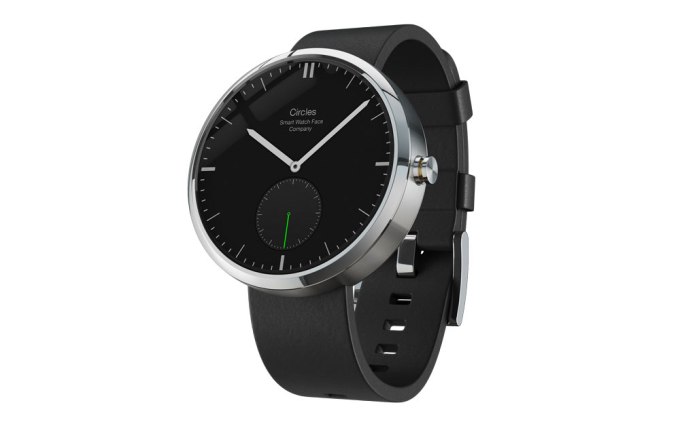