50 Cent’s new album isn’t doing too well critically, but commercially the rapper is trying to take all comers and is even accepting bitcoin as payment for the record.

I went through the payment process to verify the fact. Here you go: 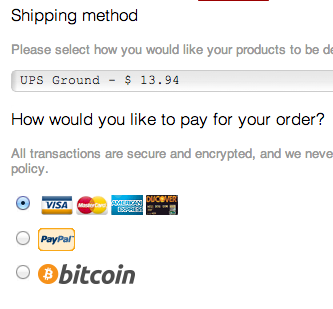 Why do we care? Mostly that 50 Cent — an artist who has sold so well in the past that he is mainstream by definition — would include bitcoin as a payment option is precisely the sort of thing you would look for if the cryptocurrency were picking up wider adoption.

50 left his major label for an indie, and is selling the album online via Shopify, which introduced Bitcoin payments as an electable option in late 2013. Shopify in turn uses Bitpay as a processor. So, in a sense, 50 Cent is helping Bitpay grow its userbase. And they say technology is boring.

It will be interesting to see if 50’s sales will push bitcoin volume up a measurable amount.

Also, here’s a bonus cut from the record in case you are culturally behind:

IMAGE BY FLICKR USER FLATTOP341 UNDER CC BY 2.0 LICENSE (IMAGE HAS BEEN CROPPED)