Apple CEO Tim Cook gave a brief update on iOS 7’s adoption this morning at WWDC, while also slamming Android in the process – even “joking” that Android dominates the mobile malware market. According Cook, thanks to free software updates which Apple controls, 89% of iOS users have now updated to the iOS 7 mobile operating system on their devices, which is the latest major version. In comparison, he says, a big percentage of Android customers are still using a version of Android from “four years ago.”

Cook even whispered that last part for dramatic effect. (You can’t beat the showmanship involved in these events.)

In a pie chart displayed behind Cook, Android’s latest major version (Android KitKat) was shown with just a 9% share of the Android install base.

Another slide – perhaps not checked for accuracy? – noted that Android had 99% of the mobile malware market. What, like nobody tries to hack Blackberry phones anymore? 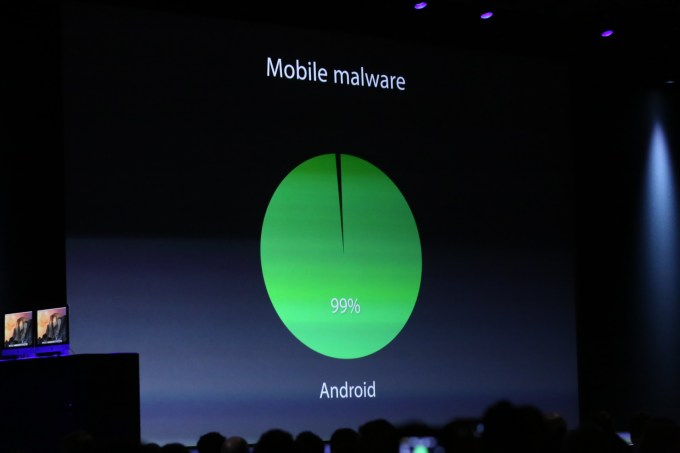 Cook even called Android a “toxic hellstew of vulnerabilities.”

The company also noted that nearly half of iPhone buyers in China switched from Android to Apple’s iOS. “They wanted a better experience,” Cook claimed. Of course, China Mobile’s support for the iPhone this year likely helped with that figure.

Meanwhile, Cook added that iOS had a 97% “satisfaction” rating according to research from Changewave.