Notifications and messages can be a big distraction because you have to stop whatever you’re doing to open them in their corresponding app. But in the upcoming iOS 8, Apple will offer “actionable notifications” you can respond to in-line. Tap or drag down on a banner or lockscreen alert, and you can type a reply, confirm a contact request, Like or comment on a Facebook photo you’ve been tagged in, and more without switching apps.

Apple demoed the new interactive notifications at WWDC today along with a bunch of new features in iOS 8, the next version of its mobile operating system that will be released in September. 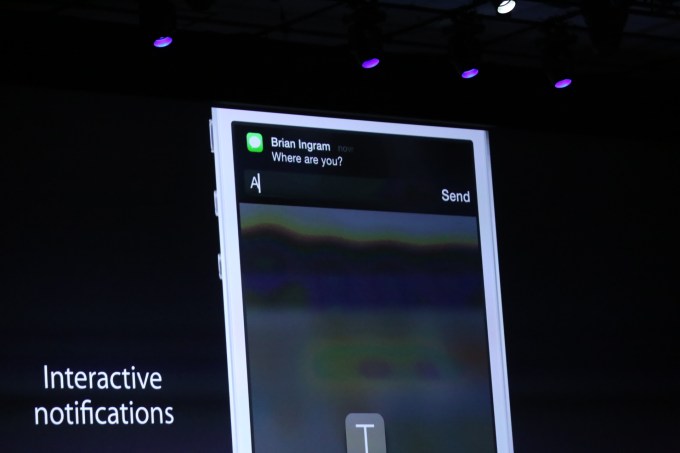 Actionable push could go a long way towards making our phones seem less overwhelming even if we have a ton of apps installed or are carrying on multiple conversations. The ability to efficiently respond increases our bandwidth for receiving alerts because they won’t constantly interrupt us.

For example, if I’m reading a news story and someone sends me a meeting invitation, I don’t have to switch to my calendar. I can read the push, reject the invitation, and keep reading my article. Or if I’m looking at Maps and trying to get to a friend’s house, I could reply to their message asking how far away I am while still looking at the map. 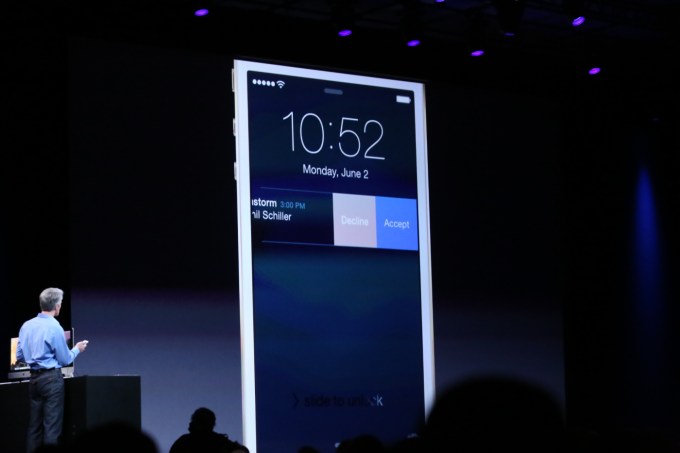 In that sense, iMessage is becoming a bit like Facebook Home’s Chat Heads, which used overlaid chat bubbles to let you message without losing context. A year ago when Home launched, I said chat mult-tasking was a game changer, and  “I would be extremely surprised and disappointed if the next version of Apple’s iMessage didn’t have some kind of chat multi-tasking.” Home flopped and Facebook largely ditched Chat Heads in favor of its dedicated Messenger app, but soon similar functionality will be available on iOS thanks to interactive notifications.

With any luck, interactive notifications will help our brains cope with the massive influx of information we’re bombarded with. Digital Detoxes have grown popular in recent years as people seek a vacation from the constant pings. But interactive push notifications could strike a better balance between power and peace of mind.