Kids today have pretty much had their entire lives on public display from the time their mother posted their first embryo shot on Facebook.

And currently there’s no way in the US to erase yourself, embarrassments and all, online. But with the rise of anonymous apps, there is a way to separate who you want to be publicly from who you are and what you think about privately.

This concept has at least reached the ears of European legislators.

You see, what began with a Dublin cab driver posting a YouTube video of someone ditching on paying his cab fare became a landmark ruling in Europe earlier this May that gives individuals the right to erase what they don’t like displayed about themselves publicly online. The ruling requires Google to comply with individuals’ requests to erase links that they say violate their privacy. And it’s already recieved 12k requests on just day one. In the first few days after the ruling in Europe, about 1,000 requests were made to take down certain links, over half of which were of criminal convictions, according to those briefed on the requests.

Evan Spiegel, CEO of Snapchat, would probably like to go back and erase those college frat boy emails resurrected this week for all the world to see. Not defending the guy or his actions here. To be clear, having sympathy for Spiegel is sorta like having sympathy for the devil. He is an asshat and those emails were completely gross. But is it fair to call out the douche bro emails of a 19 year old college boy? Sure, he’s barely a few years older than that now, but this was prior to him becoming CEO of a major tech company, and, to his knowledge at the time, private emails sent to other bros. 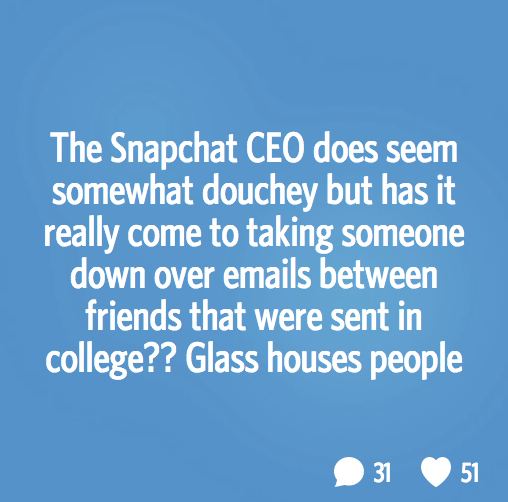 Who among us wouldn’t want the ability to erase some of the dumb things we’ve done online, especially in our youth? But, as the Secret post above eludes to, we’ve all been there, done that one thing or other that we wish we could just make go away. It’s even worse when it could potentially live on, eternally etched into the ether of the net for anyone to resurrect later. It’s most likely the reason anonymous apps are so popular with the kids. Glass houses, indeed.

The rise of anonymous apps like Snapchat, Secret, Whisper and others allow us to be who we really are, not who we want others to perceive us as, online.

I, myself, have selectively posted certain things to Twitter that I would not dare post to Facebook for fear of my own mom freaking out over my political (and other) beliefs….that was at least until she discovered Twitter. And should one feel the need to reinvent themselves, to start over anew? Very difficult if old duck face cleave shots or dick pics come up.

Beyond supposedly anonymous apps, there are entire services like Pictoguard, dedicated to helping people manage their rep online. Even certain online tools and search engines like DuckDuckGo promise to not track our online moves just to give that extra sense of security that what we do is truly our own private deal.

In the words of Warren Buffett, “It takes 20 years to build a reputation and 5 minutes to ruin it.” This is especially true with the kind of information available to us online and as the youth of this generation grows up, grows out of the dick pic phase and begins to take on their adult lives.

How much should be allowed to exist in the aftermath of young foibles? Should we not also have the ability to reduce those embarrassing moments and be granted permission to reinvent our own online narrative?