Need is an online magazine and retailer for men who hate to shop, but still want to find unique clothing and lifestyle items. The Dallas-based startup announced today that it has raised $500,000 in seed funding led by investors Greg Abbott, CEO of International Dispensing Corporation (IDC); Imran Sheikh, CEO of Aftershock London U.S., and Mobelux, Need’s development partner.

The capital will be used for hiring, building out Need’s proprietary technology, and launching localized retail and editorial products for cities in the U.S. and abroad. The funding round also included participation from Dallas-area angel investors and Venista Ventures, a German investment firm.

In addition, Need also said that it has formed a strategic partnership and joint venture with Abbott to explore new consumer-based verticals for fashion and media. Its tech platform, built with Mobelux, will be at the core of the new partnership by generating localized data for the fashion industry as well as finding new areas of opportunity for e-commerce.

Need launched in November with one employee, founder and CEO Matt Alexander. Since then, Need has become cash flow positive and has over 100 brand partnerships, including Bridge & Burn, Field Notes, hook+ALBERT, Noble, Nudie Jeans Co., Realm & Empire, and Rye 51, which allow it to offer exclusive or limited edition items to its customers.

Each month Need selects about eight to 12 products, including clothing, books, furniture, coffee, alcohol, and artwork. Collections are then presented in magazine-like editorials, with original photography and articles, as well as illustrations and videos. Each month’s selection varies from city to city. 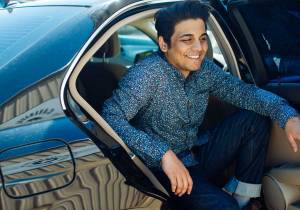 In an email interview, Alexander said that Need’s approach keeps its customers from being overwhelmed.

“We remove all variables from the shopping equation, providing one variant of a shirt, for instance, rather than dozens. And we create—rather than react to—trends suiting men in particular markets and areas across the U.S. As we’ve seen, men respond exceptionally well to fewer variables, fewer options, and better story. No social media outlets or large storefronts provide such an experience on a consistent basis—let alone a localized basis.”

Need’s blend of content and e-commerce make it similar to sites like Zady and Domino. There are also other websites that cater to men with similar tastes as Need’s demographic, including popular blogs The Sartorialist and Street Etiquette. Alexander says Need’s approach to e-commerce is similar to the Gilt Groupe—indeed, Gilt Groupe’s former president Carl Sparks is on Need’s board, along with Sheikh and Alexander— but a few key differences.

For example, unlike many online stores, Need only sends one email per month to its members.

“The result is that we have an enormous open rate (80% as opposed to an industry average of 12%), an enormous number of repeat customers, and a growing user base of tens of thousands per month. (In December, for example, we sold out within 20 minutes of sending our monthly email),” says Alexander.

Its target customers are men between 25 and 42 who are “beginning to graduate beyond the bounds of their local mall mainstays.” Alexander notes that the menswear industry is worth $130 billion.

“At the end of the day, men still hate to shop. So, if you ask me, there’s room for Need to differentiate and provide something measurably new.”

“People tend not to remember the occasions upon which they spend $50 on a jacket from H&M,” he adds. “Rather, they remember the time they spent much more on a product with character and history. At Need, we aim to fulfil the latter without the headaches of searching for the very best.”

In the future, Alexander says Need will localize to new markets in the U.S. and abroad, including London late this year or in early 2015.

Need’s tech platform allows the startup to create collections that appeal to men in different cities based on demographics, climate, and location, “whilst also generating a wealth of information pertinent to the markets and its desires.”

Alexander says the platform has already been the target of acquisition inquiries, investments, and is now the core of Need’s new joint venture with Abbott. In addition to his current position at IDC, Abbott was also previously CEO of Ithaca Industries, a private label manufacturer that has worked with apparel companies like J.C. Penney, Nike, and Gap.

“As we are creating trends — introducing product types, endorsing brands, and so forth — we are generating a huge amount of incredibly valuable information for brands and retailers alike. For brands, we can produce co-branded products and isolate precisely where colors, sizes, and other such variables will work in the U.S.,” says Alexander.

“This provides us with exclusive items, whilst also providing brands with invaluable marketing information regarding new product types. For retailers, we can use this data to inform as to where the industry is headed. And, given our data, it also means we’ll be able to pre-fill sizing for all customers, provide incredibly accurate product suggestions (and buying for new collections), whilst also allowing us the means for producing top-notch journalism in a mobile-friendly manner.”