Yesterday, Microsoft’s CEO Satya Nadella noted that Azure, the company’s cloud platform, had more work to do get better traction with startups and developers — an area where one of its biggest cloud rivals, Amazon, has done well.

Today, the company is taking a step to improve that: it has bought Capptain, a startup based out of Paris that provides app developers with analytics and the ability to send push notifications based on customer usage patterns. Capptain will be integrated into Azure, the company says.

The news was posted in an announcement on Capptain’s site, which we are copying below. Update: Now Microsoft has also made an official announcement.

“We are hard at work integrating Capptain’s solution with the wider Microsoft Azure suite of services so that enterprises can not only build mobile apps to engage customers and employees, but also analyze and optimize that engagement,” notes Microsoft’s Omar Khan. “In the interim, Capptain’s existing solutions will remain available to both new and current customers.”

Financial terms of the deal were not disclosed but we are trying to find out. Six year-old Capptain had raised around $2 million, with $1.5 million of that coming from Runa Capital. It’s the relatively young Russian VC’s third exit. (The others were ThinkGrid getting acquired by Colt Telecom in 2012 and CloudFlare buying Stop The Hacker in 2014.)

This is Microsoft’s fifth acquisition out of France. And given Capptain’s emphaisis on push notifications, it’s notable that this is yet another interesting digital marketing-related startup to come out of the country, which also is where Criteo was founded.

The marketing element, it seems, will figure strongly for Microsoft — an interesting turn in itself considering that Microsoft has had some significant misses in the mobile ad space in the past.

“At Microsoft, we understand the power of mobile apps and have made significant investments in cloud services that power mobile app development,” writes Khan. “Capptain will bring a vital new element to our end-to-end story for mobile app development – real-time user and push analytics. With Capptain’s solution, organizations can analyze customer and employee behavior in real-time, and respond by pushing targeted messages, announcements, information or offers.  This information empowers organizations to provide personalized, specific content to their customers in order to maximize business opportunities.”

The interesting thing about Capptain is that while a lot of mobile app analytics platforms focus on iOS and Android, it has always put an emphasis on covering as many platforms as possible.

Today supported platforms include iOS, Android, Html5, Web OS, Blackberry/RIM and Windows Phone down through to Samsung’s Smart TV service, and the subsequent range of devices, from mobile handsets and tablets through to Internet-enabled TVs.

The multi-platform support is not to be underplayed. As Microsoft continues to position Azure as a competitive force against Amazon and Amazon Web Services (a theme that gets a lot of time in this recent Wired profile of Azure head Mark Russinovich), showing that it can offer support for more than just Windows is key. 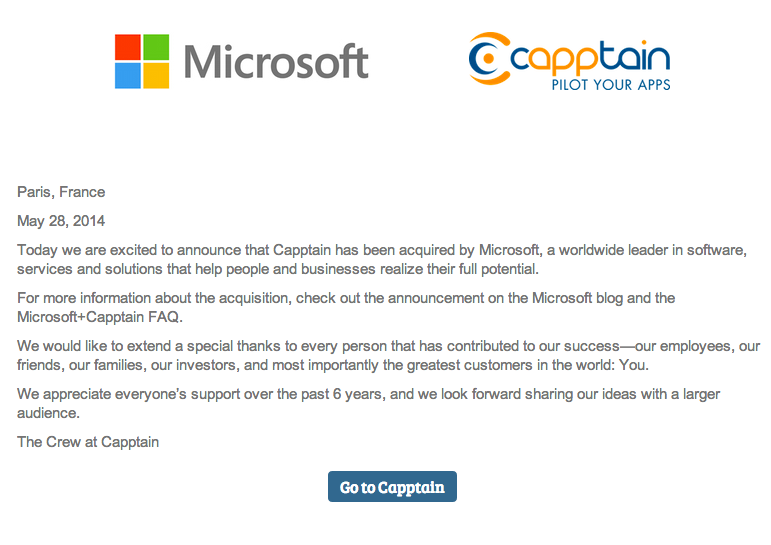