I’ve known Evan Spiegel, Snapchat CEO and co-founder, for a while now. We have had more than half a dozen in-person conversations, far more phone calls, and even shared twenty minutes together on stage at Disrupt SF. And try as I might, I’ve had a hard time liking him. Now, after reading emails sent by Evan Spiegel during his undergrad time at Stanford, I clearly understand what my instincts were telling me.

Dude’s kind of a dick.

You can see the whole swath of leaked emails at ValleyWag, but I can summarize them all pretty easily for you with the above paragraph. Here’s a typical example: 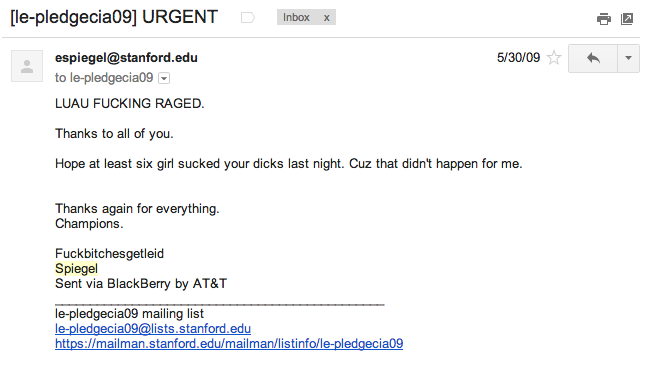 Like Zuckerberg with his infamous IM leak, Spiegel was in college when he sent these emails, which describe peeing on women, doing blow, drinking underage, getting his friends laid by wasted “sororisluts”, and shooting lasers at “fat chicks.” The emails are disturbing, in content as well as spelling and grammar, and wear away what little hope is left for the younger generation.

Spiegel has released this official statement to TechCrunch in response to the leak:

I’m obviously mortified and embarrassed that my idiotic emails during my fraternity days were made public. I have no excuse. I’m sorry I wrote them at the time and I was jerk to have written them. They in no way reflect who I am today or my views towards women.

And he’s right to be embarrassed, the emails display the worst of the ‘bro’ mentality that continues to contribute to the marginalization of women in Silicon Valley.

All in all, these emails are bad news bears for Snapchat and Spiegel, but they don’t surprise me in the least. I’m not going to relay anecdotes from my personal conversations with Evan, as I promised him long ago. However, when you separate Evan the person from Evan the co-founder, what you get isn’t a lovable kid who drew a ghost and built an app. You get a desperately unassured, lanky kid who covers up his insecurity with unabashed cockiness.

Evan is his own ideal user.

He’s savvy enough to never have said such racist or sexist things around me, a member of the press, but the tone of most of our conversations centered around how smart he was for building something as cool as Snapchat, and everything else can go screw itself. These emails, while sent from an even more immature version of the boy king, still have the same tone paired with different, more disgusting imagery.

To be fair, we all say things that are meant to be private, and when Spiegel sent these emails to his Kappa Sig bros, he probably never imagined that they’d be paraded out for the world to see. That said, we can’t possibly comment on them without pointing out the deep irony: Evan is his own ideal user.

Spiegel and Bobby Murphy, who was allegedly very high at some point during the writing of these emails, built something that is meant to protect against this very situation. Snapchat is an app that sends self-destructing messages, so even if you’re too drunk to have sex and end up urinating on some poor girl named Lily, your correspondence about those events never reaches the light of day.

Snapchat itself has had very few snafus since its inception. Aside from a sexting ‘scare’ (which actually brought the company more publicity), the only real obstacle in the way of Snapchat has been the handling of a malicious attack that exposed user data. The company didn’t apologize until harassed into doing so by the internet.

The only other obstacle in Snapchat’s way, from a corporate standpoint, is Evan himself.

The 24-year-old is a smart cookie. There’s no denying that. Talk to him for five minutes and you’ll discover a perspective you’ve never seen before, laced thoroughly with feigned confidence. And I’m not the only one who feels this way. Only yesterday, Satya Nadella was praising the wunderkind onstage at re/code.

In an interview with Forbes, Spiegel apparently lied when he told the story of Facebook’s Mark Zuckerberg offering to meet with him and discuss an acquisition. His version of the story includes a warm, and slightly desperate, invitation from Zuck to come visit, as well as a cold rejection from Evan telling Zuck to come down to LA.

When Spiegel was called on it, he showed the real email correspondence, which reads more like a high school freshman trying to play hard-to-get with the quarterback of the football team.

Other founders in the LA area, whose ventures don’t compete at all with Snapchat, haven’t had the nicest things to say either. One friend of mine, who doesn’t call Spiegel a friend but does have pretty regular interaction with him, called him “deeply insecure” and “unbearably cocky.”

To be honest, I wanted to like Evan. I really tried. I wrote off his cockiness as immaturity and even slightly deserved. After all, he did build a $2 billion business at the age of 21. But eventually, the more you get to know someone who you’ve respected, a time comes when the part you respect separates itself from the actual human being behind the respectable accomplishments. And to me, these emails are a final delineation between the man who is running an incredibly interesting business and the boy who never learned to respect women, or other human beings, for that matter.

Not only is the rhetoric in these emails downright disgusting, but it describes illegal activity, drug use, is incredibly sexist, and borders on racist. That’s a big deal, and a headline risk.

We’ve recently seen the immaturity of founders backfire for other companies, most notably Rap Genius who just this weekend fired a co-founder over an insensitive annotation he posted to the website.

However, Snapchat is in a pivotal moment. The kids who use the app obsessively won’t care about Spiegel’s shenanigans, current or former. They probably don’t even know who he is.

But as Snapchat moves towards monetization, which could very likely include partnerships with big brands, the collegiate douchebaggery of the CEO may make that process much more difficult. And while I’d like to think that Snapchat’s board and VCs will react with shock to this, chances are they will remain silent and hope this blows over in time for Snapchat to live up to its $2 billion valuation.