More than twenty years ago, Linux began wending its way out of the primordial soup that was the early Internet and ensconcing itself in servers and workstations around the world.

After its creation in 1991 it took another eight years or so to be widely recognized, but during that period, arguments arose as to what Linux really was. Could Red Hat, a company founded in 1993, sell services around it? Who made money when you sold a CD containing the latest version of Mandrake Linux? Who owned code written on top of Linux for specific purposes? To the open source community, the answers to all those questions was “No one. The community owned Linux.”

And the battles began. Richard Stallman, the man behind the GNU operating system, fought for a licensing model that allowed for absolute freedom in software while Linus Torvalds called for a less adamant interpretation of the philosophy. These wars, which were waged on mailing lists and usenet, are now almost forgotten and, thanks to quick and easy donation systems and direct downloads of open source software, it is trivial to support your favorite open source project either through code check-in or actual donations. It’s also trivial – if not expected – to sell services and support on top of open source software. Many services, including WordPress, follow this model.

Now we are entering a different conflict, one whose core question is “Who owns 3D printing?” The origin of this quandary lies with the creation of the RepRap Project, an open source effort to create a machine that can build itself. Founded in 2005 by Dr. Adrian Bowyer, RepRap printers have existed in a parallel evolutionary course to high-end industrial printers that cost thousands if not millions of dollars. Now those waters are muddied thanks to the big guys, Stratsys and 3D Systems, beginning to actively use their patents to protect their IP. Furthermore, there are examples of designers who offer their 3D objects up in the Creative Commons (here are mine, for example) and are then upset when users with printers offer their designs for sale.

The IP in question is manifold but the battle most recently came to a head in two patents the corporation filed on behalf of its designers. One is a self-leveling bed solution – something that’s been done before and is currently the Holy Grail of open source printers – and another is for a quick-release filament guide which users are claiming is similar to this open source project on MakerBot’s own Thingiverse. I leave it as an exercise to the reader to decide whether either of these cases exhibit enough prior art and borrowing to accurately state that MakerBot “stole” these ideas from the community. In a nutshell, the outrage is mostly about he act of patenting the ideas rather than the ideas themselves.

The problem with the open source community is that it is, by design, not owed anything for its work, yet expects utmost deference to be paid. To be clear, Linux could have never gotten off the ground without the community that surrounded it. But that does not mean that every business based on open source tools (provided that business returns the various and direct changes to open source code when applicable) must grovel at the feet of a self-designated cabal of protectors.

The same can be said of 3D printing. MakerBot itself was an early proponent of open source hardware and, over the years, has made its money selling products that work better and more stably than most open source and home-brew printers. However, like Red Hat and Ubuntu, at some point equal deference must be paid to the gods of commerce. Those who have printers should be able to sell prints from their machine to those that do not have printers – this is the basis for services like MakeXYZ that allow customers to request prints using a streamlined process – and there are countless others who will brave the perils of prior patent art to try to build the next great 3D printer. In fact, a quick perusal of Kickstarter shows us a few dozen 3D printers already in their final stages of funding as well as a 3D scanner that looks surprisingly like a MakerBot Digitizer. 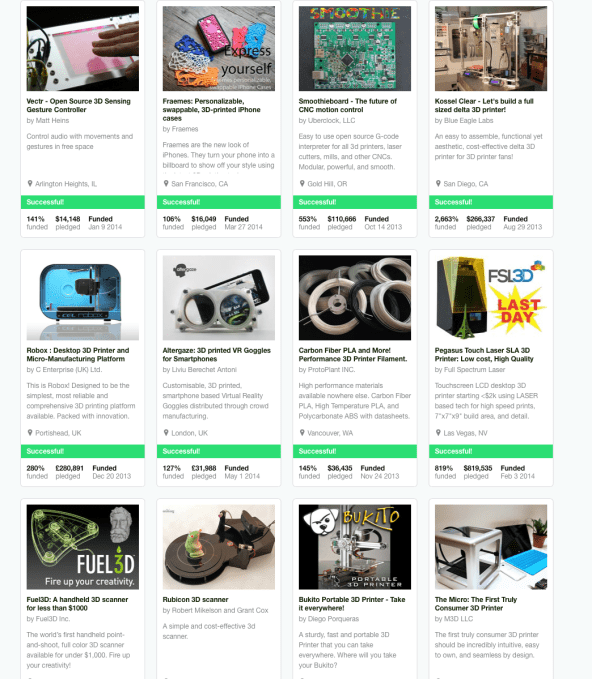 The open source community is vociferous and prone to throw victims on the fires of their collective wrath. But this ethos is always tempered by time and the improvement of the OS product in question. When an open source printer and open source 3D software is as solid and usable as offerings from Form 1 and MakerBot, I will most likely switch. Until then, as a weekend tinkerer without the time or the energy to invest hours into maintenance and software tweaks, I’ll have to keep investing the so-called mean giants of the industry. I think 3D printing is changing the world and open source printing is at the forefront of this effort. But I don’t want either party to enter into the spiral of recrimination and FUD that once characterized the Linux world. The 3D printing evolutionary tree is open to all comers at this point and today’s giants might be tomorrow’s roadkill. As the bard once said, the wheel’s still in spin.