At this point, unless you steal power from the electrical grid in some weird squat or you have your own hydroelectric plant, home bitcoin mining is a sucker’s game. Sure you can make a little and you definitely help out the bitcoin network by processing the hashes that make up bitcoin transactions, but plugging in your own hardware usually means huge electricity bills and a trickle of BTC so slow that you barely make back your investment. With that in mind, then, I decided to plug in a HexFury 11 gigahash/second USB miner, one of the last powerful USB miners that can actually make you a few dollars a month.

First, let’s understand what this thing is. The HexFury is a USB mining rig with six small ASICs made by a company called Bitfury. The ASICs, in this case, are chips that do one thing – mine bitcoin – and they do it very well. Up until the HexFury, most USB miners of this type could run at 2 GH/s per second or slower, enough to mine a few dollars a year. At this point these older ASICs cost about $12 while this model costs $200. Could you mine with the smaller ASICs? Sure, but you’d essentially be burning money in a tiny bonfire. I ran a collection of three 1 GH/s ASICs and got about $1 a month.

A unit arrived from Asicrunner and I unwrapped the single chip and checked it out. On one side are the six ASICs and on the other side is a large, passive heatsink. It looks like an overgrown thumb drive with exposed innards, which should give owners of inquisitive cats pause. The device requires a 5V USB hub (Belkin makes a few good ones) and a separate fan. I used this Arctic USB fan.

To mine I used a Raspberry Pi with a USB card onto which I installed Minepeon, a free mining platform that supports multiple types of ASIC miners. It is one of the simplest ways to turn your Raspberry Pi into a real mining rig and is very cool. You can learn how to install it onto an SD card here.

To run the chip with Raspberry Pi Minepeon installation I had to install and recompile cgminer 4.3.2, the latest version of a standalone mining app that runs on most platforms. I had to recompile it to work with the current version of Minepeon. Once you’ve put Minepeon on an SD card and booted up your Raspberry Pi, you need to download and compile cgminer for your environment. Here are the commands I used:

This should get you the latest version of cgminer.

How does it perform? Well, with the fan pointed directly at it and the hub powered on, I consistently saw 12GH/s. This enough to make about $150 a year at this current difficulty and bitcoin price. This is a screen from Minepeon. 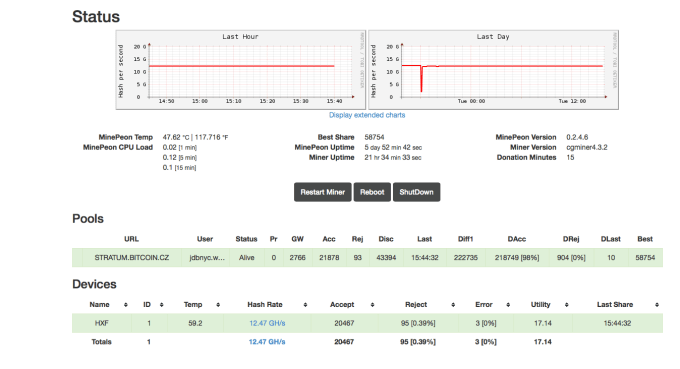 You’ll notice that at that speed we would see about 0.018 BTC per month, or about $10. Given the cost of electricity and the constant rise in the bitcoin mining difficulty rate, this will eventually fall until 11 GH/s is a paltry speed.

Home mining, at this point, is more about the experience of mining than any real money making. While you can make a little money with this, you’re obviously going to have to connect a few of these together and have free electricity to make any sort of dent into the initial $200 investment. This is a speedy and powerful little chip and a real testament to what kind of power you can stick onto a small PCB. As these things catch up with higher-powered units, it’s only a matter of time before we can all make a few BTC a month with something the size of a stick of gum.