Thanks to an unlikely series of events, I, a civil/environmental-engineer-turned-tech-media type, found myself on the set of HBO’s Silicon Valley last fall, serving as a consultant to HBO, which was trying to recreate a TechCrunch Disrupt in a Hollywood (well Culver City) studio.

You probably don’t realize the insane amount of work that goes on before the actors show up in the studio. Sure, a show like Mad Men takes a lot of work to accurately portray those times, but a Silicon Valley tech conference? That’s easy, right? Wrong.

In the weeks leading up to my visit, creative directors, set and costume designers, assistant producers and a variety of other HBO and TechCrunch staff came together to recreate Disrupt SF 2013. No detail was too small, from the color of the tablecloths in the Startup Alley, to the exact digital files we used to print signs, to the card stock used on the name badges, to the design of the volunteer T-shirts, to the fake wooden pillars that were built to replicate our San Francisco venue, the Design Concourse.

The actual Disrupt Cup, which we award to the winner of the Startup Battlefield, was shipped and used in filming. All the background screens were playing real footage from the conference. If you think you saw a shot of Aaron Levie onstage, you probably did.

Also in the Alley were about 15 real companies who exhibited in Startup Alley at Disrupt SF 2013. Of course, there were also about 45 fake companies that HBO generated to fill out the set, some with such ambitious goals like “Do It Yourself Surgery.”

With all the intensive preparation, I was eager to see how the venue turned out.

I arrived just in time to deliver the real Disrupt programs for the actors to use in filming the opening scene at the conference. I was given a chair behind the director and producers. Occasionally I was asked things like, “Do the speakers wear their name badges on-stage?” “Are there chairs at the Startup Alley tables?” And other such mission critical details.

Not a bad view… 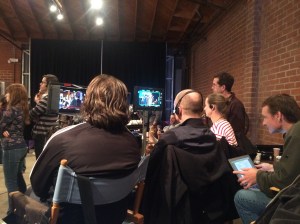 I met a guy, my TV writer alter ego, Dan O’KEEFE, an assistant producer and writer, who was kind enough to explain the ins and outs of the goings on. (Dan also happens to be one of the writers of the Seinfeld episode on Festivus).

When the set is finished, the crew sets up cameras from one vantage point, extras are brought in and given background direction, stand-ins do a few run throughs of the shot. Actors then show up and do as many takes as necessary to get the scene right. Then the whole process begins again from a different vantage point. All in, a scene that lasts a few minutes can take a few hours to shoot.

Our illustrious Battlefield emcee, Jason Kincaid, was also on hand to moderate the Battlefield scenes.

“It was totally surreal, like some kind of drug trip that gave me déjà vu every five minutes,” Kincaid says. “They had the real Disrupt signs, the name tags — even the stage itself felt right. Of course there were differences. More cameras and hairspray than I’m used to, and there’s a lot of repetition in the production process, with the same scene being shot from multiple angles. I remember asking Mike Judge how I should sit in my chair, and he said to sit how I usually sit, and I had a minor existential crisis. I decided to try to keep my back straight, this being TV and all.”

Hopefully the audience at Disrupt is a bit more engaged than HBO’s…Though not filming scenes in the Pied Piper house at the time, I was able to poke around the set and see the company’s “live, work space.” A common practice for startup companies, HBO replicated an actual Silicon Valley house and added all the signs of startup life, including stacks of video games and leftover Ramen in the kitchen sink.

Now, almost six months after this experience, it’s bizarre to watch the event play out on screen. If you’ve watched our previous coverage of Silicon Valley, it may come across that the actors have little background on the tech scene. As for the writers and crew, they’ve done their homework.