Apple has pulled the No. 1 game in the U.S., called “Weed Firm,” from the App Store. The game, which had been described as something of a “Grand Theft Auto” for the marijuana-minded, allowed players to grow and sell weed, interact with gangsters, and earn lots of dough for their drug-dealing activities.

According to a statement posted to the game developer’s website, the removal of “Weed Firm” was “entirely Apple’s decision, not ours.”

It’s clear why Apple wouldn’t want a game like this at the top of its App Store charts, but its rejection is also somewhat confusing since it looks like the game was singled out for the sole crime of becoming universally popular. Requests for comment and an explanation from Apple were not returned.

The developer, Manitoba Games, says that they believe the problem was that the game was “just too good and got to No. 1 in All Categories, since there are certainly a great number of weed-based apps still available, as well as games promoting other so-called ‘illegal activities’ such as shooting people, crashing cars and throwing birds at buildings.”

While that statement may sound a bit like immature boasting on the developer’s part, they may actually have a point.

In the past, Apple acted as if it had a problem with mobile apps that somehow promoted illegal activities, like “Herb Converter” for example – an app that once allowed dealers to calculate fractions and convert from ounces to grams. But in the time since that app’s rejection, U.S. laws have changed – pot isn’t necessarily illegal everywhere, depending on the circumstances.

But that’s beside the point, really.

It’s still Apple’s prerogative to reject applications on any grounds it so chooses. After all, the App Store is not the open web; it’s an entity owned and operated by a company that can enforce its own guidelines as it sees fit.

What’s interesting here is how Apple has used those guidelines to specifically target this game. 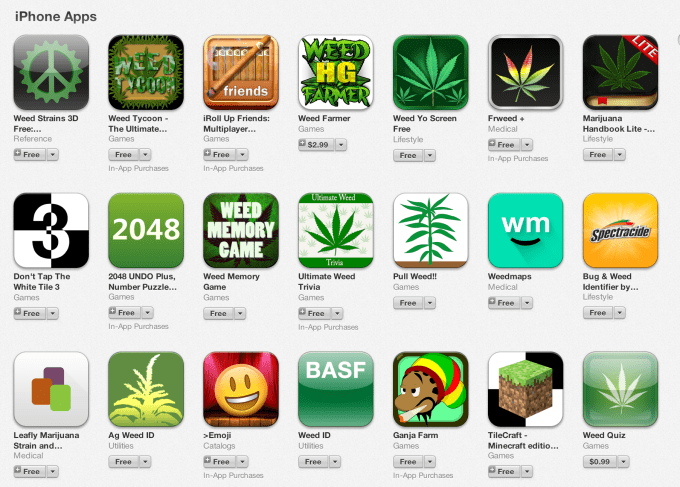 In a search for the term “weed” on the App Store today, there are dozens upon dozens of results, ranging from weed trivia games, weed strain identification utilities, handbooks, the ever popular “Weedmaps,” to even a few very similar games to the now-rejected “Weed Firm,” including one called “Weed Tycoon,” which lets you own and operate your own shops and grow weed crops, as well as a “learn to grow weed” game called “Weed Farmer.” These apps and more are still live after “Weed Firm’s” rejection.

However, it seems the tide may be turning. Another developer posted publicly to Facebook today that his weed game was rejected, too. What’s happening here, according to sources, is that Apple is using a specific section of its App Store Review Guidelines to enforce these narrowly focused rejections. Section 16.1 says that “apps that present excessively objectionable or crude content will be rejected.”

It seems that “excessively objectionable” is up to Apple to decide on a case-by-case basis, however. The above game, depicting cops as actual pigs, is clearly a rejection target. But “Weed Firm” was a bit more involved, with a story line and variety of characters to interact with. Or, in other words, it didn’t become No. 1 just because it was about pot.

Won’t Someone Think Of The Children?

Today’s App Store is now in the hands of ever-younger users who will play some stupid games. But Apple is likely not interested in being the platform where a bunch of young kids and teens are having fun playing a character learning his way around the world of drug dealing. Of course, the “Weed Firm” game had the highest maturity rating, but many parents don’t bother with parental controls on iPhone.

Still, “Weed Firm’s” developer doesn’t think that should be their problem. “We do not want kids playing Weed Firm, but we firmly believe that adults should have a choice to do whatever the hell they want as long as they are not hurting anybody in the process,” they say.

“Weed Firm” had previously disappeared from Google Play as well, and Google would never provide us with an explanation on that front, either. However, according to the post on the Manitoba Games website, the problem on that front was not the content, but with the game’s publisher.

“We are expecting to return to the Play Store once we find a suitable publisher,” the site proclaims.

Let’s see what Google thinks about that.