Andrew “Weev” Auernheimer penned a long letter to the United States Federal Government today asking for restitution for the 38 months he spent in custody, including time he spent in an upstate NY prison. His letter, which quotes Shakespeare and calls bomber Timothy McVeigh a patriot, is sure to turn any court in the land against him, which, I suspect, is his goal.

“Now the government’s answer, or lack of it, will be permanently preserved in the Bitcoin block chain as a matter of public record,” he writes. “PAY ME MY MONEY, YOU LYING SUBHUMAN GARBAGE. You also should resign from your posts, as you’ve shown yourselves to be collective disgraces to rule of law and enemies of the United States Constitution. Those of us who actually love this country should take your places.”

Weev, who recently left prison thanks to a federal appeals court decision to reverse and vacate his conviction and sentence, is now building a hedge fund called TRO LLC. He’s also looking for one bitcoin for every hour he spent in prison.

My current market-determined hourly rate is 1 Bitcoin an hour. I was taken from my childhood home at gunpoint on January 18th, 2011, and I was not allowed to freely exercise my liberties as a citizen until April 11th, 2014. That’s 1179 days that you used my time that I am now billing you for (I gave you a discount by not including the last day). I am owed 28,296 Bitcoins. I do not accept United States dollars, as it is the preferred currency of criminal organizations such as the FBI, DOJ, ATF, and Federal Reserve and I do not assist criminal racketeering enterprises. 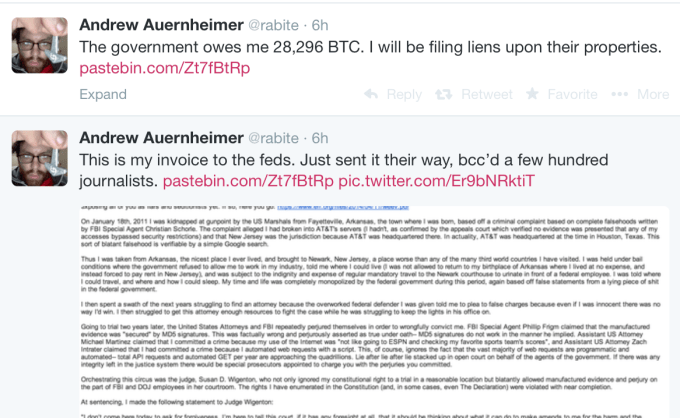 Whether or not the government will pay up is the question of the day, but I suspect the latter will be the case. Chaos is Weev’s mode and modus, and his efforts to raise awareness of his causes are always loud.

“The federal government has declared war on We the People,” he writes. Apparently he is now a combatant on the other side of that war suing for reparations. How he will go about this is still in question, but I suspect he’ll do a bit of amateur lawyering on his own behalf, as he has in the past. 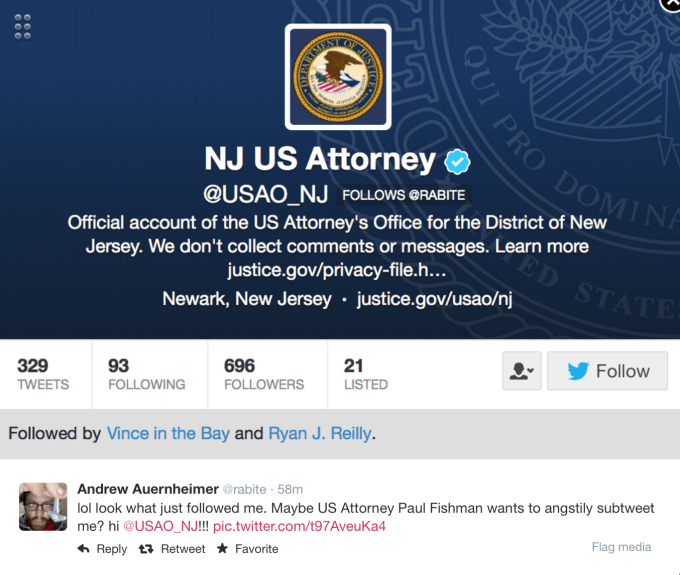 Weev, behind his bluster, was arrested for incrementing an integer. While his screed will give the rational mind a run for its money, his complaints are backed by fact and his anger justified. We may not support Weev now, but when we are taken in for similar “crimes,” we’d do best to remember his strange trajectory.