I’ve always had a special place in my heart for design Easter Eggs. Particularly the ones that are hidden in plain view — the ones that I’d somehow looked at a hundred times without actually seeing.

When’s the last time you took a close look at the icons on an Android phone? Like, really, really close?

If you’ve got an Android phone handy, take a look at the icon for the “People” (contacts) app, in particular. It’s a rolodex-like set of cards, with a bit of text that’s just small enough that you’d probably never stop to try and read it.

If you did, you’d spot a clever little Easter Egg left behind by one of Android’s icon designers. 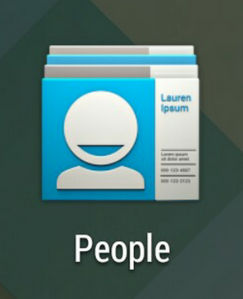 The itty-bitty name written on the top contact card is “Lauren Ipsum” — which, to many who might stumble upon it, probably just looks like a random, made-up name.

If you’ve ever dabbled with design (or stumbled across someone’s unfinished website), though, you’ve probably already caught the gag: it’s a reference to Lorem Ipsum, a nonsensical faux-Latin blurp of text that designers often use as a placeholder to show how a design could look if you plugged in some real words.

They needed a placeholder name for the contact card — thus, Lauren Ipsum was born.

I’ve probably looked at that icon 1,000 times without spotting that little touch. Now I’ll probably never not see it.