An app for interested homebuyers (or nosy neighbors!) called Homesnap got its start by allowing users to snap a photo of any home in the U.S. in order to get all the details about it, including things like square footage, market availability, and the home’s value. Now the company is expanding its service to Realtors, by partnering up with local MLS (Multiple Listing Services) providers, in order to bring real-time MLS data to smartphones and tablets, while also allowing Realtors to communicate with clients on the go.

Born out of D.C.-based Sawbuck Realty, which also operates its own real estate web properties in addition to Homesnap, the mobile app first launched in spring 2012, offering a different way to browse through real estate listings, or even just get an idea about a neighborhood’s value.

The service’s proprietary database is powered by a combination of MLS data, public records, mortgage rates, and more, which it taps into while using sensor data from your smartphone – like the accelerometer, gyroscope, and GPS – to determine where you are and what you’re looking at when you’re snapping a photo.

To date, the app has served as a utility for those shopping for a home, as well as a lead gen tool for agents. Today, with the launch of Homesnap Pro, verified Realtors will be able to access agent-only MLS data from the app as well.

At launch, this feature is available in the Mid-Atlantic region, including the D.C. area, thanks to a partnership with the second-largest MLS in the U.S., MRIS, who will provide Homesnap Pro subscriptions to all its 45,000 members. In addition, a few local brokerages are also now providing their own agents with co-branded versions of Homesnap Pro.

Sawbuck Realty CEO Guy Wolcott explains that the company realized they had the potential to take their previously consumer-only tool to agents because of the challenges agents faced when working with the “professional” MLS data. Today, Realtors still often access their MLS from their computers, despite the fact that they’re almost always mobile themselves.

And the MLS websites can be awful, outdated messes that Realtors don’t really enjoy using. Meanwhile, because there are hundreds of MLS providers across the U.S., none of them would gain traction if they cared to invest in a modern, mobile interface.

“Turns out, the huge economy of scale for mobile apps meant that no MLS or real estate brokerage could build a mobile tool that agents would really use,” says Wolcott. “But we had built one – for consumers! – that had around 70% of what agents wanted. So we spent the past year building Homesnap Pro to turn that 70% into 110%  – it includes stuff they didn’t even know they were missing.” 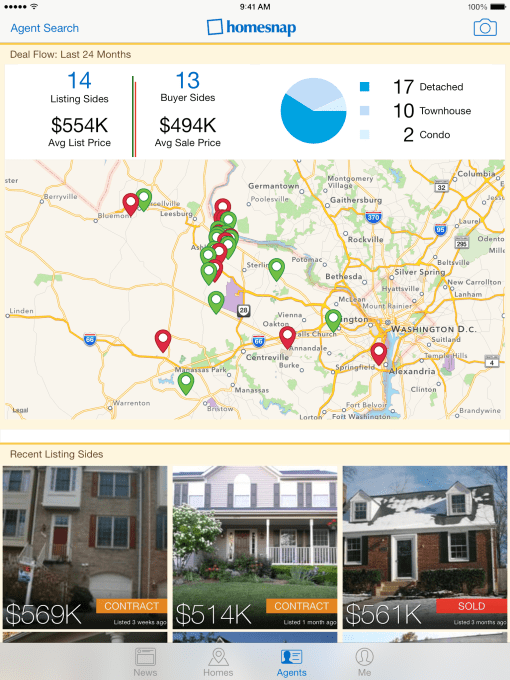 With the Pro service, available for $29.99/month, Realtors get real-time access to agent-only MLS data, plus info about any other home, including value, last sale date, listing history, lot boundaries, comps, and more. The app also allows agents to message other agents and clients, customize email marketing to clients and contacts, and run an instant Comparative Market Analysis (CMA) on their smartphone.

The company says it will begin to roll out this Pro platform to more regions over time, through further partnerships with MLS providers.

The updated Homesnap app with the new Pro feature is a free download here on iTunes. The app is also available on Android.