OpenGov, a company that helps cities and other local governments bring their financial data onto the cloud, has picked up a $15 million Series B round of capital, led by Andreessen Horowitz, and participated in by Thrive Capital and Formation 8. Previously, OpenGov had raised around $7 million.

The company’s product brings years of a local government’s financial data online, allowing for the information to be graphed and sliced in endless variety. As you likely would have expected, many municipalities have incredibly archaic data systems, making generating reports of past expenses over time difficult if not nearly impossible to execute.

OpenGov changes that by applying modern tools to previously hidden data. OpenGov customers’ data is online, so you can peruse your city’s data, or the data of any other local government on the system.

As an example, here’s Palo Alto’s expenses and revenue for the past few years: 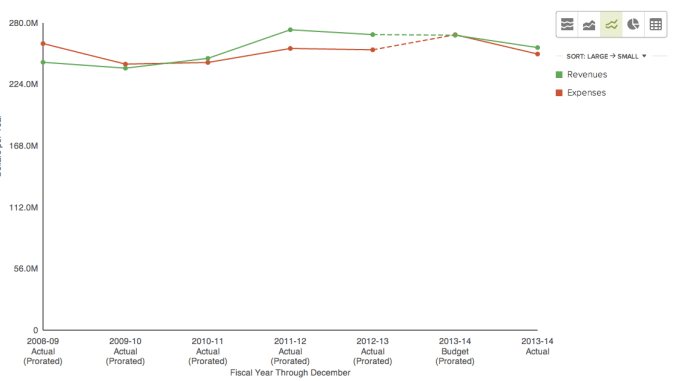 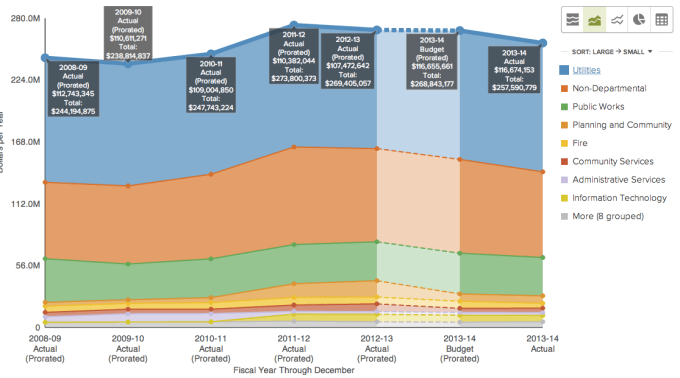 The company has around 100 clients so far. With its fresh capital, that number should quickly expand. OpenGov told TechCrunch that there are around 90,000 to 100,000 local governments that are potential customers.

I asked if there was a size of city that was best for OpenGov, to which its co-founder and Zac Bookman demurred, noting clients as large as Los Angeles, and locales with a mere few thousand inhabitants.

The product is also surprisingly cheap, with contracts for the basic OpenGov service costing in the thousands, to low tens of thousands of dollars per year range, depending on how large the client is. OpenGov has plans, of course, to build out its feature set, and sell more advanced tooling, but its base product is affordable enough for nearly any budget.

I like OpenGov because it’s a simple tool that will allow more average folks to understand where their tax dollars are going, and whether or not their city is spending more on one category or another than cities of commensurate size and ilk.

Anything that makes government less opaque, especially financially, is worth pursuing.

IMAGE BY FLICKR USER Gary UNDER CC BY 2.0 LICENSE (IMAGE HAS BEEN CROPPED)