Products like the Oculus Rift and Project Morpheus have revolutionized the gaming landscape by making virtual reality headsets accessible to the average gamer, but they have a major drawback. Each are married to their platforms and only work with a relatively limited list of games.

“We wanted to solve the compatibility problem because all the virtual reality products on the market are not compatible with mainstream gaming platforms,” said Qin Zheng, the Beijing-based company’s founder.

Currently on Kickstarter, the kit has raised nearly $86,000 of its $200,000 goal in just two days. The set starts at just $300, which the company explained on its Kickstarter comments section is because ANTVR Technology is not only located near Chinese hardware manufacturers, but also currently selling the ANTVR kit at cost in order to get it on the market. The campaign ends on June 23, 2014. 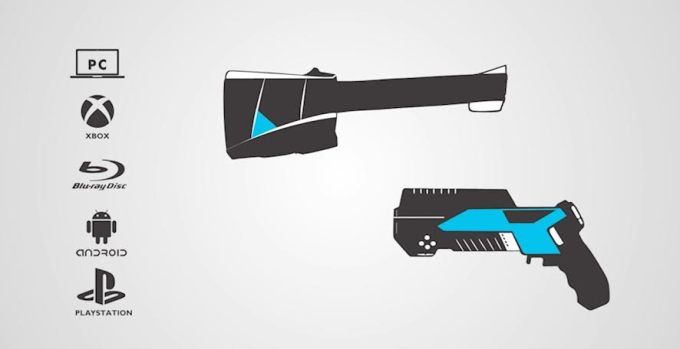 The ANTVR kit is compatible with games designed for the Oculus Rift, as well as most PC and console platforms. It can connect to all devices that support HDMI, including desktop computers, XBox, PlayStation, iPhones, iPads, Android devices, and Blu-ray players. For devices with no HDMI output, a HDMI adapter can be used.

The headset has a 1920X1080 HD display and aspherical lens (one of its key differences from the Oculus Rift), which Zheng says causes less distortion when it projects standard ratio pictures. It can be worn with prescription lens and one-step positional tracking helps keep players from feeling dizzy when gaming.

The transformable controller opens into a gamepad or folds up into different shapes to simulate a gun, lightsaber, or steering wheel.

ANTVR also works with mobile games, so you can even treat yourself to a more immersive Candy Crush experience. Zheng notes, however, that the set works best with first-person shooter and role-playing games.

In addition to open-sourcing its hardware, ANTVR Technology will also make SDKs available to software developers so they can create games for the kit.

“If there are developers with other gaming systems or just device developers, they can choose to modify the firmware inside our hardware,” he adds.

To be sure, there are other companies that are working on cross-platform virtual-reality headsets, including True Player Gear, though it’s unclear when its product will be available for sale.

Zheng says ANTVR Technology has a working prototype of the kit and will start mold testing next month. Then the company will send prototypes to early backers in July, make changes based on their feedback before mass production, and ship the final product to other backers by September.

Below is a chart comparing the ANTVR kit with Oculus Rift and Project Morpheus. 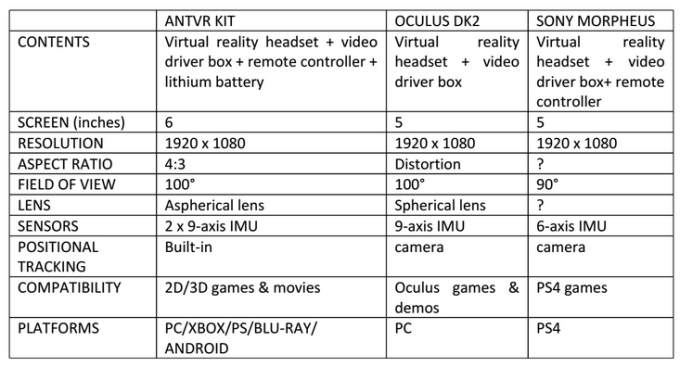 To learn more about ANTVR, check out their Kickstarter page.