According to security firm Qualys, Windows XP’s market share among enterprise-level corporations has slipped under the 10 percent mark, falling from 10 percent in April to “close to” 8 percent in May.

This matters given that Windows XP is now past its expiration date, as Microsoft has ceased to support and patch the more than decade-old operating system. According to NetMarketShare, Windows XP retains more than 25 percent of the global desktop computer market.

Enterprise firms eclipsing the 10 percent market around a month after Microsoft removed support for Windows XP is potentially encouraging. At current rates, according to Qualys, Windows XP market share among large companies, using current trends, would reach zero in four months. That won’t happen, of course, but the graph points down and to the left. 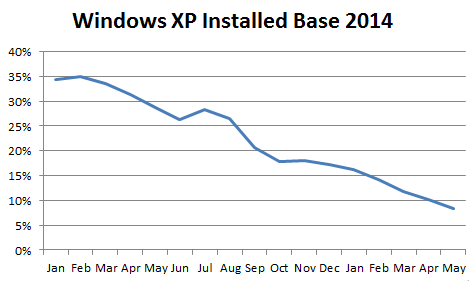 Why should you care? Windows XP is a security risk. That was recently highlighted in an Internet Explorer zero-day exploit that impacted a number of versions of the browser. More will crop up. And as long as big companies are on un-patched Windows XP, they are unsafe. And those companies often have your data on tap.

IMAGE BY FLICKR USER AUSTEN SQUAREPANTS UNDER CC BY 2.0 LICENSE (IMAGE HAS BEEN CROPPED)