Native advertising is seen “as this great new hope for publishing,” said Chartbeat CEO Tony Haile, but there’s also a fair amount of skepticism and outright dismissal. He argued that one of the main reasons for that is pretty simple: “So much of native is bad.”

Since Chartbeat is a real-time analytics company, it’s no surprise that Haile blamed some of that badness on the way the ads are measured. Usually, an advertiser will only see how many impressions a native ad (i.e. sponsored content on a publisher’s site) received, and maybe how many times a post was shared on social media. In other words, even though the hype around native is that it should be just as good as regular content, advertisers are only looking at how many eyeballs they’re getting.

So Chartbeat is expanding its tools to include paid content. This is a separate product (with separate pricing) that can be used by both publishers and advertisers, and even though it looks a bit stripped down compared to the full publisher dashboard, it brings a similar approach to individual pieces of sponsored content, with a big focus on how the ad is performing compared to the rest of the content on the site.

With the new analytics, you can see not just how many people opened the ad, but how many people finished it, plus the average engagement time. There’s also an overall score between 0 and 100 that tells you how the piece is doing compared to the rest of the content on the site, looking at factors like traffic, engagement time, and social media sharing. And you can drill down further to see things like different traffic sources and which “key influencers” have tweeted about the article.

Haile hinted that the company would be going in this direction in a piece recently published in Time, where he criticized the way that the web is measured, arguing that we need to look less at clicks and more at attention. (The company elaborated on the idea in this infographic about “the attention web”.) Chartbeat itself may still be best-known (at least among the journalists who are addicted to their Chartbeat dashboards, a group that includes many TechCrunch writers) for measuring eyeballs, but it has been adding more engagement data. 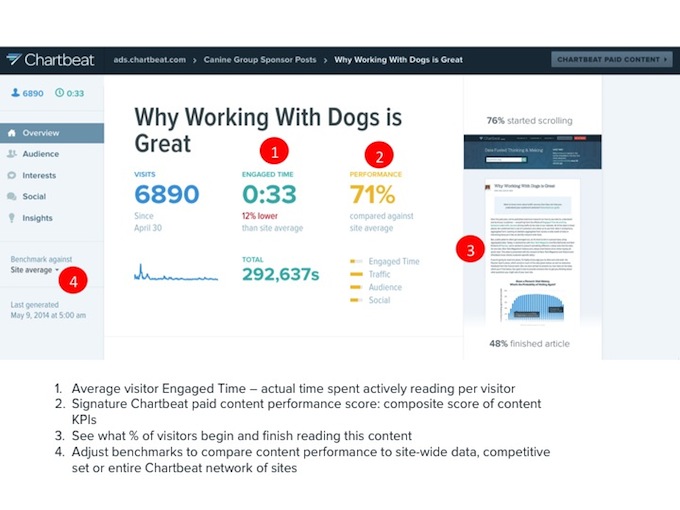 You can check out a sample paid content dashboard here.

The company is also announcing that it has raised $3 million in additional funding. That may not seem like much, particularly compared to the $9.5 million Series B that Chartbeat announced two years ago, and indeed, Haile said he intends to raise a full Series C later this year.

In the meantime, he argued this money (provided by existing investors Draper Fisher Jurvetson and Index Ventures) adds to the “war chest” and gives the team more time to focus on product before he has to shift into fundraising mode.