Square, by many accounts, is hungrily in search of new revenue streams to feed its expanding ambitions in e-commerce, and today we are getting another glimpse of where that strategy is taking it. The company has launched a new mobile app called Square Order, which lets you order from nearby eateries, pay for it, and then get a ping when it is ready for collection.

As Square looks to focus itself on future and sustainable revenue generation, Square Order may be just the appetiser for a bigger meal.

TechCrunch understands from a reliable source that Square was a “serious bidder” against Google for Appetas, a restaurant website building platform Google just acquired. Ultimately, Appetas (which is closing down as its founders move to Google in Mountain View), opted for Google “mainly due to the close alignment of direction for the technology and the space,” according to our source.

It comes at the same time that Square Wallet, Square’s consumer payments app, has quietly (but not too quietly) left the app store. Although Square says it will continue to support those who have downloaded Wallet and use it, it is worth wondering whether Wallet failed to find the traction it needed to sustain further development. “The truth of the matter is that we wanted to add more value to the experience of paying with name and the most efficient way to do that was to build a new app on a new and more agile platform,” a Square spokesperson says.

“We’re taking everything we learned from Wallet and what people love in Wallet and building it into Square Order. We think it’s an even better experience that offers buyers more utility,” a spokesperson says. “We will continue to support our Square Wallet customers. We are encouraging new customers in the App store to download Square Order, the app that we will continue to build on moving forward.”

Considering the Appetas detail, it’s worth wondering whether Square Order is based on tech that Square has built in-house, or if it is part of another acquisition, or if the company is working with a third party.

By coincidence, there is another company in the Khosla portfolio alongside Square that has built the same type of service. Tapingo, as the app and startup are called, has up to now focused only on extending its service out to college campuses. Others that compete in this space include Seamless, Delivery.com and even Foursquare.

“We built Square Order in house,” the spokesperson tells me.

The fact that Square has launched the app, and has been eyeing up buying food-realated startups, is a sign of where food services are fitting in for Square as a business. 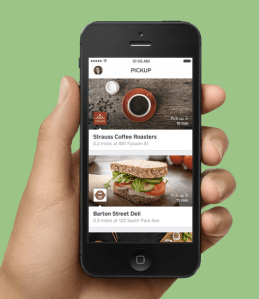 First, there is the competitive threat.

Some mobile commerce players (like iZettle) may be looking just to make the mobile commerce experience better and more widely used. But other rivals in the mobile/local commerce space like Groupon have also been making large food inroads by catering (pun!) specifically to restaurants and cafes — this strategy was behind Groupon’s acquisition, integration and further investment into mobile point-of-sale specialists Breadcrumb. (Groupon, by the way, was another serious bidder for Appetas, as was GoDaddy — really a sign of how Appetas’ fate could have gone is some radically different directions.)

PayPal also has been expanding its services in the area of restaurants, where you can now pay for your meal using the PayPal app, for example (that’s for eating-in though).

Second, there is the promise of business in this vertical. While many people may not make daily trips to buy clothes (okay, some do) or other products, there is something more habitual about food.

Think here about the daily trip to pick up your lunch while at work, or a coffee and bagel in the morning, or grabbing take out on your way home at night. In other words, if you tap into the right places and the right experience, you can find yourself in the midst of a decent and regular revenue stream.

“Restaurant tech space is heating up and I think having a strong SMB sales presence is huge,” our source notes.

Third, there is the basic potential for business here that makes focusing on restaurants a smart bet. The National Restaurant Association estimates that there will be $683.4 billion in sales in the space this year across some 990,000 restaurants, working out to 47% share of all food dollars in the U.S. And it fits very much in line with Square’s focus on small merchants: seven out of every 10 restaurants are single-unit operations in the U.S. today.

While Square has already made a lot of headway with local merchants adopting its point-of-sales services like its smartphone- and tablet-integrated dongles, or its Register product, this extends those services out to cover more online opportunities carrying over into the offline world, similar to what Square has done with the Square Market, but now for a more perishable, service-based commodity.

Its interest in Appetas follows this logic, too: Square doesn’t just want to be grabbing transaction dollars, but building solid relationships that can then be used as a more natural, and maybe inevitable, extension into wider revenue streams.

Square Order is kicking off with services in New York and San Francisco, with an app already available on iOS, and an Android app currently in beta (both first spotted by The Next Web). The company is giving users the ability to log in and request their own restaurants and even cities for where the service should go next. Indeed, if it hopes to be truly useful, scale and choice will need to be of the essence.

Square Order will also give Square a chance to leverage some of the other e-commerce infrastructure that it is putting in place — specifically around the area of logistics and fulfillment. Square has integrated its pickup feature into the Square Dashboard, where Square Merchants can enable pickups, just as they enable shipping orders (which we covered earlier this month). What this means is that a service like pickup can potentially be used for all kinds of products, not just food, and sellers using Square Register can take in-person orders and see what their pickup orders are.

As for commissions, it looks like Square is initially taking a cut on Square Order based on its standard fee of 2.75%, which gets applied to the total amount of each pickup sale “for a limited time, until July 1st, 2014.” After then, Square says the fee will go up to 8% per pickup order, and that includes payment processing.

Here is how Square outlines the process for Square Order: 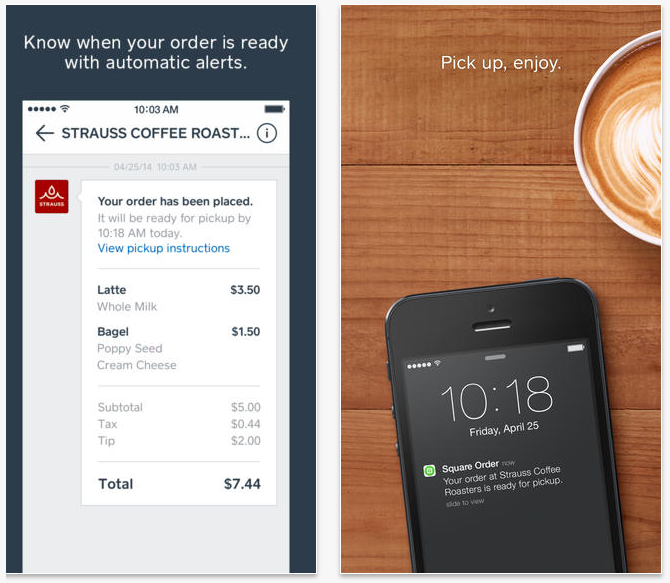 Updated with response from Square after publishing