@WalmartLabs, the retailer’s Silicon Valley-based innovation lab and R&D center, has now made its twelfth acquisition with the purchase of e-commerce technology company Adchemy, its biggest deal yet in terms of people. Founded in 2004, and backed by nearly $120 million in outside funding, Adchemy had experimented with a number of business models over the years. And though it had been making steady progress, CEO Murthy Nukala admitted as recently as last November, that it was not yet profitable.

Adchemy founder and CEO Nukala is not joining as a part of the deal, we’re told.

While deal terms are not being disclosed, we’re also hearing that Adchemy was mainly a talent acquisition for the retailer.

The team of 60 who are joining @WalmartLabs include a number of skilled engineers, including Rohit Deep, previously the Chief Architect and Engineering Lead at WebEx; Ethan Batraski, formerly the head of search innovation at Yahoo; and data scientist Esteban Arcaute, a Stanford Ph.D., also previously at Yahoo.

“They built an incredibly strong team of talented folks who understood product search, product relevance, SEO, SEM, and data scientists and Ph.D’s who could build this technology,” explains Jeremy King, who leads @WalmartLabs.

The Adchemy team’s combined skill sets overlap with many of the same things Walmart itself is working on today, including improvements to its product search engine and product classification systems, for example.

We also understand that Adchemy’s technology and IP is not going to replace Walmart’s existing infrastructure, but instead it will be about enhancing the talent pool in three specific teams working at @WalmartLabs today. 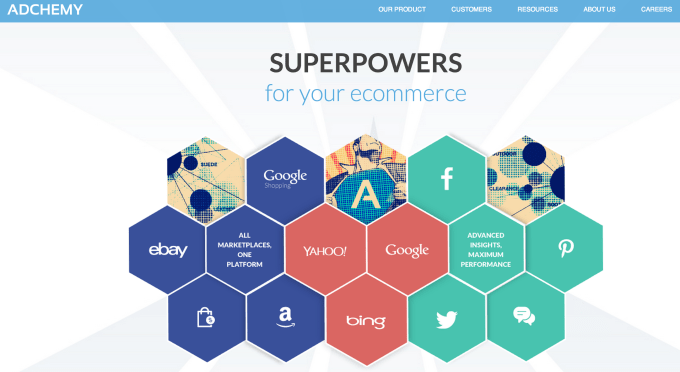 For starters, Walmart has been working on improvements to its sites’ search engines (e.g., Walmart.com and SamsClub.com) over the years, having acquired semantic search company Kosmix back in 2011 for $300 million to help it build up its team.

Though Kosmix’s founders later left the company, the engineers remained. Together, they built on top of Kosmix’s “social genome” technology to launch a new version of Walmart.com search, dubbed “Polaris” in 2012. Those changes immediately improved conversions on Walmart.com by 20%, the company now tells us. With the Adchemy buy, a number of that company’s engineers will now be tasked with continuing the efforts started by that team.

Another area where Adchemy’s engineering talent will help in product classification. Walmart added 6 million products to its site over the last year, and plans to add millions more in the months ahead, we’re told. Walmart, like other online retailers, has to classify items using the data provided by the manufacturer, reseller, or marketplace provider, to determine what the item is, how it should be categorized within Walmart’s own product database, how it should be tagged, and more.

Adchemy’s engine was a bit different from Walmart’s in this case, however, as it was focused more on ad targeting. That is, it would determine if a page was about shoes or electronics, for instance, while Walmart’s tech goes deeper, trying to determine things like “which shoe,” or “which gadget.”

Finally, Adchemy’s in-house expertise in SEO and SEM who will also be joining the @WalmartLabs’ team.

Adchemy had a complicated history, detailed here on Business Insider last winter. The company began with six products but killed off five of them over the years, including its lead gen business, sold to XL Marketing in November 2013. Its most recent efforts had focused on semantic search technology, which why it ended up with the high-caliber talent that attracted Walmart’s interest. The idea was to extract the “meaning” from a retailer’s catalog, so it could respond with better product listing ads in Google based on that deeper understanding, rather than just keyword matching.

It customers included Macy’s, ModCloth, Overstock.com, American Eagle Outfitters, Finish Line, Resolution, and a couple dozen others. Those customers were alerted about this deal, and will have their contracts terminated when it closes.