Search is outdated. Google steers you to right section of the library, but doesn’t answer your question or compile that answer with others to help you make a decision. Luckily, today Vurb is launching its reinvention of search results in the form of a web and mobile contextual search engine. Rather than forcing you to do multiple searches in different tabs, Vurb collects all the relevant info on one page and preserves your path in a saveable, sharable stream.

Vurb is rolling out search for Places, Movies, and Media today, but soon plans to add People, Startups, and many more verticals. The best way to convey everything Vurb can do is to just walk you through a chain of searches, so let’s take a look at trying to plan a night out. 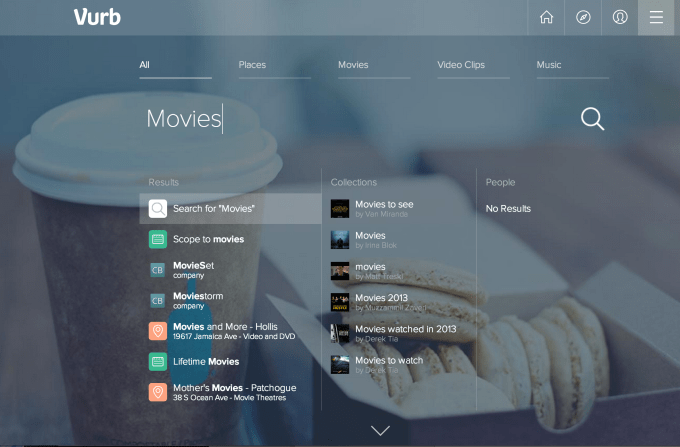 Let’s say you want to go to the movies. First you’ll get a grid of images representing films currently in theaters that you can filter by category.

If I click “Captain America,” I get a full-featured card showing IMDb score, Rotten Tomatoes score, whether the film is available on Netflix, a list of the stars, a short description, plus buttons to open Trailer, Showtimes, Cast, and Reviews. All of these unfold in-line to populate one uber-useful screen instead of requiring you to pop new tabs. If I open Showtimes, I’ll see a set of nearby theaters and showings with tickets available that I can click through to buy. 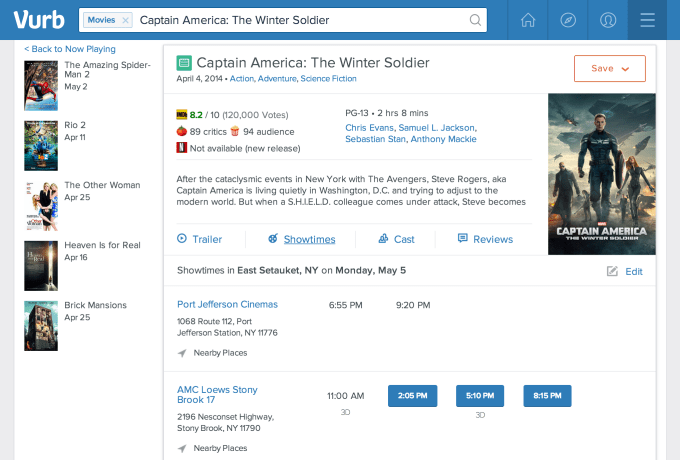 A click on one of the theaters shifts me from Vurb’s Movies to its Places-themed area of its search engine. That includes a photo of the theater, Yelp review star average, Foursquare checkin count, address, phone number, and hours. At the bottom I get Nearby Places, Directions, and local Restaurants buttons. 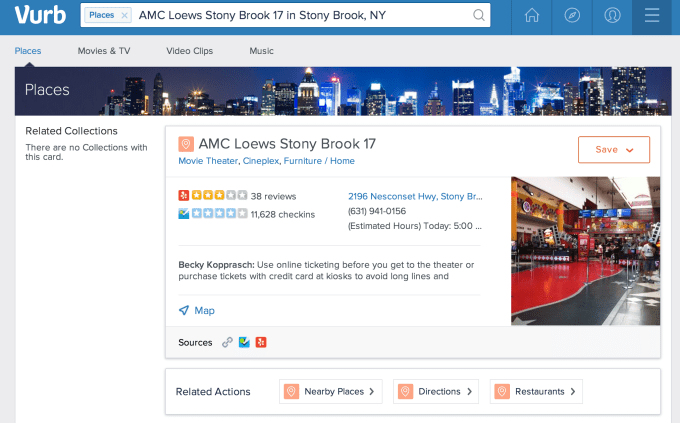 I can open the Nearby Places button to see a filterable Pinteresque layout of great stores and eateries in the area. 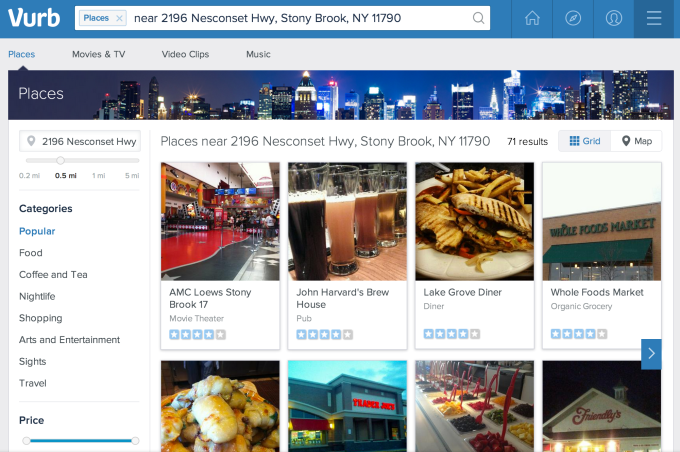 If I choose a particular restaurant, I can see a menu, map, and book reservations all in line. 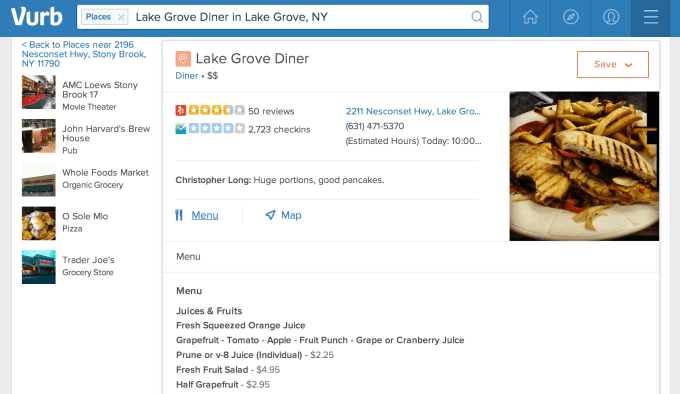 So without ever seeing some bland list of blue links, I’ve found a great movie to see at a nearby theater, I’ve got tickets and directions, and made reservations at a restaurant down the street where there’s a special sandwich I’m craving. Now if I want to share all that info with some buddies, I can save them as a collection and text it to my friends or post it to Facebook. 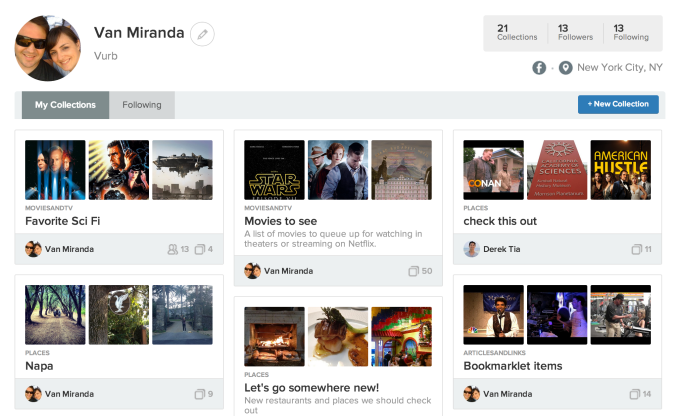 On Google you might have had to do separate searches to find a film to watch, see reviews, check showtimes, get directions to the theater, find out where to eat nearby, and look at the menu. But as you can see, Vurb is all about helping you cobble together different answers so you can make a plan or walk away with insights, not just facts.

Yes, I guess you could call this a “decision engine”, a term Bing has tried to trumpet as its advantage over Google. In reality, they both provide answers for objective information like sport scores or celebrity biographies. But at their core they’re still about lists of external links. Vurb’s goal is to dig the actionable information out of those links and present it all on the same page. That’s an especially compelling design on mobile where jumping between multiple tabs is clumsy. 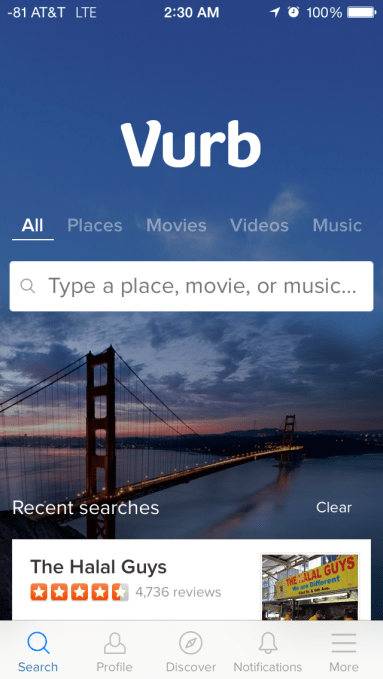 In that sense, Vurb might be more of a competitor to Google Now or Siri. The problem with those search options is that they’re so foreign to the way we think about discovering knowledge. Vurb walks the line between innovative and familiar.

Getting distribution for its app and site will still be tough. So will developing it to encompass a more comprehensive set of knowledge areas. It’s going up against well-funded tech giants. Vurb does have the $1.5 million it raised last year from from Charles River Ventures, Max Levchin, Drew Houston, Naval Ravikant, Gil Elbaz, Jim Lanzone, Brad Garlinghouse, Adrian Aoun, Othman Laraki, Raymond Tonsing, CrunchFund (started by TechCrunch’s founder), Atlas Venture, and DCVC. Today’s launch on stage at TechCrunch Disrupt NY’s Startup Battlefield could help it win or raise more to fund expansion into travel, shopping, and the minds of the public.

Now, if you’re thinking this startup is just ripping off other web properties, stealing their data, and repackaging it for its own worth…you might be right. But the plan is to actually split ad revenue with companies whose sites and apps provide it with data. Since Vurb searches often start with purchase intent and are portals to purchases, it could command steep ad rates big enough to share with partners.

Search has been stuck in its ways for too long. Google was invented before the rise of mobile and the proliferation of APIs. It seems high time for search to evolve, and Vurb wants to help make this happen.

*TechCrunch founder Michael Arrington is a partner at CrunchFund