At a time when Silicon Valley is facing increasing scrutiny over the treatment of women in technology, there emerges a website called Codebabes.com that, as you may have already heard, involves women stripping as you learn to code and pass online tests. Seriously.

People have tried it and posted their results.

To which I have to say only this: What in the actual f@ck?

The site is so over-the-top about its soft-core “edu-tainment” offerings that some press outlets have even speculated that the entire creation is an elaborate hoax. An Internet troll’s absurdist views. A dissent’s social commentary on the way the tech industry responds to issues surrounding human sexuality or the objectification of women. Or maybe it’s just some asshole trying to make a buck. Whatever.

I’d venture that it’s more than a hoax, because if so, it’s a costly one. While the website itself could have been thrown together in a few hours, the video production involved could reach the thousands. They booked professional models (some of whom think everyone should just “lighten up” by the way), for starters, which involves scheduling, photo shoots, video production and editing, and more. In other words, it would take longer than just a few hours to make this site, which rules out casual social commentary. 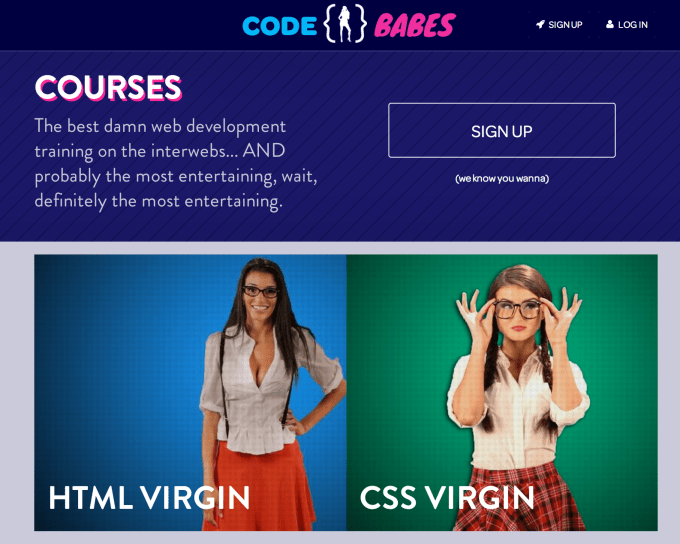 In reality, the online business is designed to opportunistically capitalize on the current backlash against the tech industry and its ongoing issues around sexism by simply thumbing its nose at people’s concerns. In fact, CodeBabes is downright reveling in the social media backlash.

Though the site’s creators won’t reply to reporters’ inquires — including ours so far — they’re active on Twitter, joyously touting that “people hate us so much that we’ve streamed 9.23 TB of lesson videos in 2 days.”

As they say, sex sells.

And, hey, so does bad press.

In fact, that’s the gimmick here.

Shortly after this month’s launch, someone using a disposable email address “tipped” us off about the site’s existence. “It’s insanely sexist and twitter is about to explode over it,” they said.

And like clockwork, that’s exactly what happened. Some pro-equality organizations are even putting together more formal responses, like The Representation Project’s call-to-action, detailed below. In an email to members, the group writes:

“In an industry where women hold just 25 percent of tech jobs, and are only 18 percent of computer-science majors, stories like this only reinforce the feeling that not everyone is welcome in Silicon Valley…

“In the most innovative, best paid and fastest growing sectors of our economy – where much of our present and future society is being built and shaped – we deserve better representation. This week, in addition to tweeting #NotBuyingIt, let’s support those that are actively drawing more women into tech careers. Help spread the word about organizations like Black Girls Code and Lesbians Who Tech that are changing culture, providing mentorship, and increasing opportunities for marginalized groups.

We’ve All Been Trolled

While we don’t yet know who’s behind Codebabes, we do know through technological means that the person(s) viewing (but not responding to) our emails is based in San Francisco.

That means they’re clued in to the current scandals in tech involving sexism and abuse – and are likely using those to their advantage.

You see, Codebabes has very deliberately arrived at a time when the historically male-dominated tech industry is facing a number of problems regarding its openness, or lack thereof, to women.

There are the recent allegations of domestic violence committed by the CEO of RadiumOne, leading to his removal by the board; a sexism scandal at GitHub resulting in the resignation of one of its founders; a fairly regular stream of name-calling on anonymous social app Secret, favored by Valley insiders; a “Silicon Valley” TV show on HBO where awkward programmers run and hide from the stripper whose services they bought to celebrate a company milestone.

And, okay, let’s not forget our own mistakes here: TechCrunch’s previously too-loose oversight of our hackathon once allowed two misogynistic presentations on our own stage. (For which we apologized, then responded to by changing our procedures, and making donations.) 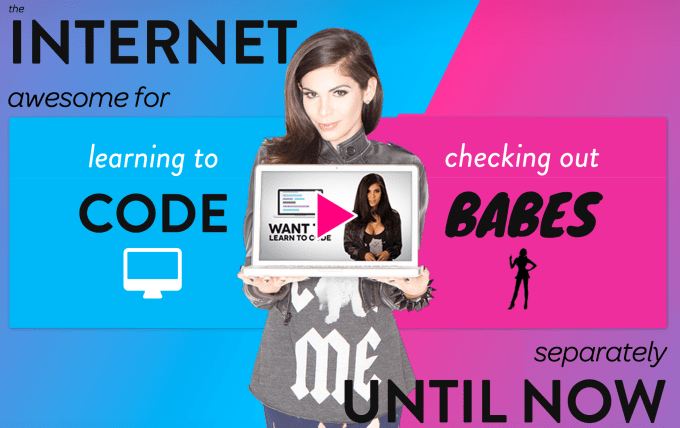 We Had To Say It: This Is Unacceptable

The question — and one I debated with myself before writing this article — is whether the knee-jerk press coverage to Codebabes’ clearly manufactured marketing techniques is the right response here.

By reacting with the expected outrage to their over-obvious attempts to provoke, we’re raising awareness of this site and inadvertently supporting their cause.

Should we not let them wither and die by refusing to boost their SEO? Should we not waste our virtual ink on this GIRLSGIRLSGIRLS sideshow, while more serious transgressions on the main stage — toxic workplaces, abuse, work/life balance, equal pay, equal opportunities, etc. — lose our attention?

Should we worry that they’re getting the actual code wrong, in parts?

(If we laugh at this parody, is that wrong?)

At the end of the day, Codebabes is a tasteless and offensive money grab, and one we’ve helped promote by jabbing at it with a stick, waiting for it to explode like some dead, beached whale. It’s everything the tech industry doesn’t need right now.

But while we may have drawn attention to the site with our complaints, lining the pockets of its trolling overlords, we’ve also taken another step in the right direction by making the default public position on such things one that clearly states:

“This is unacceptable and unwelcome here.”

And that’s a tactic that works.

As for Codebabes, the site itself will eventually fail because its business model sucks.

After all, any real business that actually wants to teach people to code would have to come to grips with the fact that their customer base includes women. Meanwhile, Codebabes’ users who are more interested in online titillation are already on the Internet. There are few other sites where you can see such things around here, you know.

And they don’t require that you take a quiz first.

Photo by jazbeck under a CC by 2.0 license (image has been modified)