At its F8 developer conference today, Parse CEO and co-founder Ilya Sukhar announced the launch of AppLinks.org, a new initiative that will make deep-linking between native apps easier for developers.

“It’s a shame that the URL is not a big deal on mobile right now. If I try to open third-party apps, I’m stuck in the web browser where I have to log in again,” Sukhar said. “There is no unified way to navigate to links across all the platforms.”

So with this new scheme, you just pass the app a web URL and if a compatible mobile app is installed, it will automatically load that app instead of the web version. AppLinks will learn which links are handled by which apps. “We crawl the web for you. You don’t have to do it – but you can, you just don’t have to,” Sukhar said. Developers simply mark up their web pages with a few new meta properties. Facebook also offers a Parse module and an API to support these features.

Facebook’s own apps already support AppLinks today, but the company has also partnered with a large range of third-party services that now use the service, too. 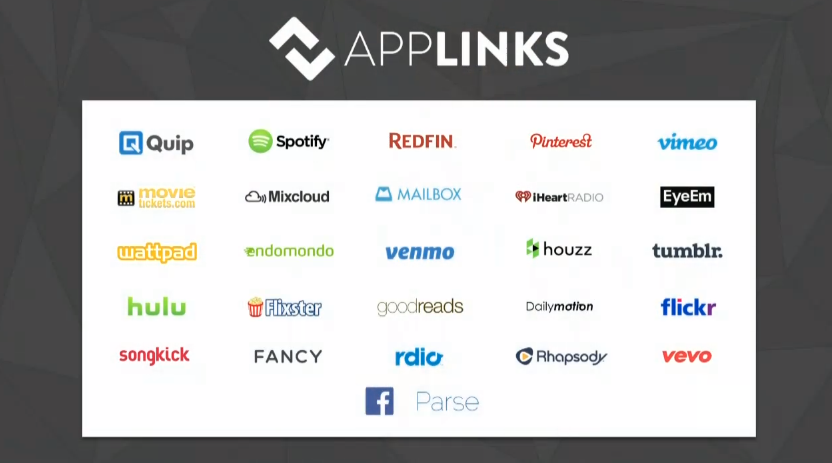 Linking between iPhone apps is currently a pretty difficult proposition that often involved a number of steps. Google does this for its fleet of iOS apps, for example, but there is no standard for invoking third-party apps that all developers can hook into. Now, developers just add a few lines of code to allow users to link between apps.

As Vijay Shankar, a Facebook product manager involved in this project, noted during an afternoon session at F8, the best part of these kind of app links is that the scheme is cross-platform compatible. It’s meant to be a truly open standard that isn’t bound to any specific platform.