On the same day that anonymous social sharing app Secret is officially crossing the pond to launch in the U.K., Ireland, Australia and New Zealand, another new anonymous app called Cloaq is making its App Store debut. The app, previously detailed here, hopes to differentiate itself in the space by being even more secret (if that’s possible!) by not requiring any personal information, like an email or phone number, in order to sign up.

The idea, the company explains, is that even if there’s a hack, there would be no personal information to retrieve. Instead, with Cloaq, users simply enter in a password and get assigned an @id number, which is sort of like a handle. The numbers will start at @alpha1 and go through @alpha999 before moving on to @beta1 and @beta9999. (I guess the Cloaq founders might be easily identifiable with this method, though, right?)

However, team tells me that with this morning’s launch, they’re only letting in the first 500 users into the @alpha batch, as they’re going to try to make Cloaq more exclusive by offering small batch “launches” that will be spaced out over time. That doesn’t prevent others from using Cloaq, they say, but only those with accounts can post. The rationale, we’re told, is about separating themselves from other secret-sharing apps where you can get quick secrets off your chest, but which can devolve into “cesspools of spam, defamation, ignorance, and general inappropriate garbage.” (Their words.)

As a reminder, because there’s no sharing of personal data with the company, if you forget your @batchID or password, you’re toast. There’s no way to verify accounts.

The other significantly different feature about Cloaq versus other anonymous social apps like Whisper, Yik Yak, Secret and others, is that posts can be of any length. In other words, you could use Cloaq as an anonymous blogging platform, if you choose. (Well, if you’re good about long-form blogging from your iPhone, that is.) These posts have dedicated URLs that could then be shared on other social media platforms, like Facebook or Twitter. 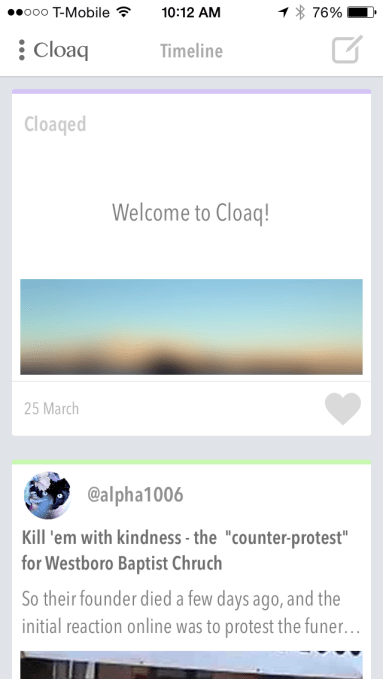 The team behind Cloaq has also asked to remain anonymous, but they’re not seasoned startup guys with industry experience. I’m agreeing not to post their names, but can say only that they’re engineers with senior and consulting roles within larger organizations where they couldn’t fudge their technical abilities.

The app itself is well-built, though with a card-style user interface and hearts (likes) that’s a bit reminiscent of Secret. I haven’t had enough time with the public release to vet it for launch day bugs, but didn’t encounter any major problems in the test version I had access to earlier.

The larger problem – and one which any new app faces, but one that Cloaq is actually making worse for itself through its launch strategy – is community. By limiting participants, Cloaq may end up with high-quality posts, but will lack the regular churn of content present in other social apps – anonymous or not – that addict users and have the returning often for more.

The new app is available for free download here.