In a noisy room, trying to shout louder to make yourself heard just escalates the problem of being overwhelmed with sound.

It’s a fitting analogy for mobile devices and content too. More, bigger, shinier, more colourful and capable screens filled with more and more apps, making incessant demands on our attention. It’s a whole cacophony of noise. In that context, less starts to feel like more.

For that reason I love e-ink. It’s the screen that doesn’t scream. Yet it’s a technology that is underutilized and one that feels increasingly overlooked in the rush to cram over-saturated HD panes onto all the smart surfaces in our lives.

Or even an idea as quasi-crazy as this entirely e-ink smartphone. Ok, you wouldn’t be watching YouTube videos on it but it’s low powered, readable in bright sunlight and could make an interesting device in countries where access to power is scarce.

Well, here’s another idea looking to make more of e-ink — specifically by using it to tone down the general noise: it’s a low-power Bluetooth-connected bedside clock with an e-ink screen.

The device — called aclock — is another project from hardware maker Hex3 (whose past projects include the YuFu, Nota and JaJa styli; and a smartphone laser blaster gun showed off at Disrupt SF back in 2012).

The aclock, which is currently in development while Hex3 takes to Crowdtilt to raise funds for full commercial production, has been designed as an update to the traditional bedside alarm clock — whose primary function has generally been usurped by the smartphone. Why bother setting a fiddly clock-radio alarm when you can just use your smartphone, right?

Well, aclock’s makers argue that using your phone as your bedside companion entails too many potential distractions at a time when you should be concentrating on rest and sleep, rather than checking who’s Whatsapping you. (There is some evidence that using small bright screens late at night can disrupt the human circadian rhythm.) So your sleeping companion should be something a lot more docile and taciturn: step forward, then, their Bluetooth-connected e-ink clock.

aclock is intentionally pared back. There are no buttons on it at all — it’s operated by motion sensing (to backlight the display) and via customisable gestures such as double taps or shaking to snooze or cancel an alarm. And all alarms are configured within the corresponding app (iOS first, with Android likely to follow).

That does slightly undermine its premise, since you have to use your phone anyway to set the alarm clock. But the alarms can be configured ahead of time, for every week day, so you don’t have to set one daily at the point of going to bed if you plan ahead.

With e-ink’s low power consumption, Hex3 says the micro-USB rechargeable clock is able to last about a year on a single charge. The 1.54-inch e-ink display also offers some user customisation options, with a choice of different clock hands/time display format. And some hardware customisation too, with packs of different clock face designs planned as part of the project.

Hex3’s Jon Atherton describes the aclock as a “Pebble for your bedroom” — referring to the eponymous smartwatch that syncs with a smartphone so you don’t have to check your main device to view notifications.

To that end he’s planning to incorporate an element of measured notifications into aclock — but only displaying them once the alarm has gone off, so when the sleeper is due to start their day.

“We have a small screen where we can show you things like weather, upcoming appointments and other notes — but not while you should be sleeping,” he tells TechCrunch. “In fact we’ll even have the option to blank the clockface until an alarm actually goes off — so checking the time will be pointless — there is nothing worse than checking the time 45 minutes before an alarm is due to go off — you never get back to sleep!”

“There are a lot of exciting things we can do with aclock, the first step is to get it across the funding line – then we can do some very cool things with the free companion app and open up to other app developers. I’m already talking to some well known devs who want to build onto the platform,” he adds. “I envisage a variety of apps working with aclock to do different things, all of them at the owners’ discretions of course.” 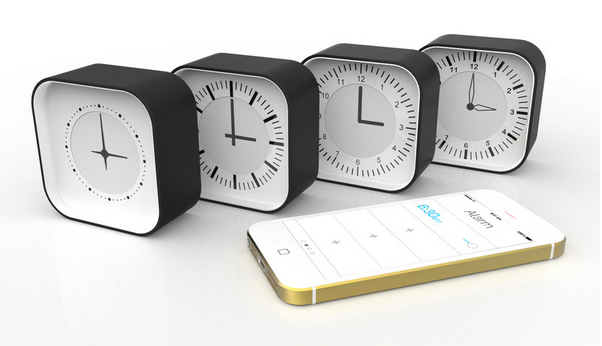 Hex3 hopes to be able to ship aclock to Crowdtilt backers by late October in time for the holiday season, assuming it raises enough funds to get the device to market. At the time of writing it’s raised more than $7,800 of its $35,000 funding target with 33 days left to go.

The clock starts at $49 for black or white polycarbonate for early bird backers, rising to $69 for black or silver aluminum. The future retail price for those two options will be $79 and $119 respectively (assuming the project gets funded and makes it to market).

In terms of other efforts in recent memory seeking to rethink the bedside clock, aclock follows in the wheeltracks of Clocky, a device that deliberately rolls away from sleepers’ attempts to hit the snooze button. While Clocky was fun, it was not a connected device, and was ultimately a one-trip pony. aclock is a whole other tech generation — one which replaces a fiddly on-board interface with an easy-to-use app, something that’s been made workable thanks to developments in Bluetooth Low Energy technology over the intervening years.

Hex3 used Kickstarter to successfully raise funds for its prior projects but Atherton said it’s experimenting with Crowdtilt this time as the fees are lower. He says the cost of running the project on Crowdtilt is around half that of Kickstarter — with Crowdtilt taking 2.5% of the total collected and levying a 2.5% processing fee per contribution vs Kickstarter taking 5% and Amazon applying credit chard processing fees of 3%-5%. “~10% is a pretty big hit for a startup business,” he adds.

And while he concedes the Kickstarter network effect is strong, he reckons it’s worth trying a  quieter alternative if it means getting to hold on to more of the funds raise.

“The big difference is discoverability though. Kickstarter has great network effect, discoverability seems to be significantly better than Indiegogo. Whereas we are basically on our own with Crowdtilt. Thankfully, we have a reasonable following from past backers, so I thought going it alone was a good thing to try out. Learning lots!” he says.

“At the end of the day with our five previous Kickstarters the funds raised that came from KS were around 40% of the total… So we will probably not raise as much as we could on KS, but it’s an interesting experiment!”